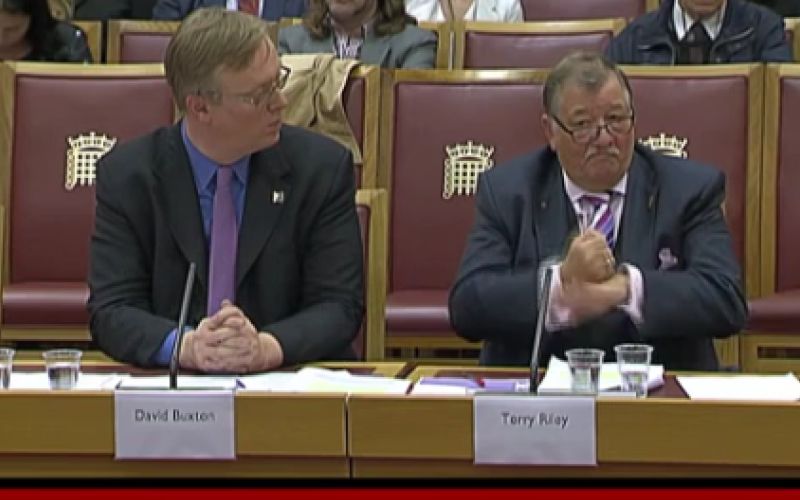 Two leading Deaf campaigners have told peers – in a ground-breaking evidence session – that the UK’s equality laws do not provide enough protection for users of British Sign Language (BSL).

They want the government to do more to protect BSL-users than is available under the Equality Act and to set up a central fund to pay for interpreters, in a similar way to the voucher systems used by governments in Sweden and Finland.

David Buxton (pictured, left), director of campaigns and communications for the British Deaf Association (BDA), and Dr Terry Riley (right), BDA’s chair, were giving evidence to the Lords committee set up to examine the impact of the Equality Act 2010 on disabled people.

They were the first people to give evidence to a House of Lords committee in BSL.

Buxton told peers that the Equality Act “simply isn’t strong enough”, that “hearing dogs for the deaf have more protection than Deaf people”, and that there should be a dedicated BSL act, which would provide the same legal protection to that currently enjoyed by users of Welsh and Scottish Gaelic.

He pointed to a case in which two BSL-using parents looking for a school for their four-year-old hearing child had been told they would not be provided with BSL interpreters for information evenings at the schools they wanted to visit.

Riley said: “The school will say to the government, ‘We don’t have the money,’ and the government will say, ‘It’s the school’s responsibility,’ so we get stuck in the middle.”

He said he understood the difficult position facing schools, which might have to choose between buying books for their library or paying for an interpreter.

Riley said that new BSL legislation could see the appointment of a commissioner to ensure there was “proper public provision” of BSL interpreting, improve the quality of interpreting and ensure it became a “regulated profession”.

He said: “We have been talking about technology and different things that can remove barriers but when the system itself is removing access that is a real concern.”

He also pointed to “everyday barriers” such as banks that do not allow a Deaf person’s husband or wife to make an important call on their behalf, or the failure to alert Deaf passengers to announcements of changes to train platforms.

Riley said: “We strongly feel we are not seen as being equal.”

Buxton added: “BSL is my first or preferred language. How do you define reasonable adjustments in relation to that?

He said that service-providers have all the power in deciding what “reasonable adjustments” they provide, and added: “We need the law to be very clear in interpretation and parliament needs to be clear about that.

“It shouldn’t be a case of, ‘The provider always wins.’”