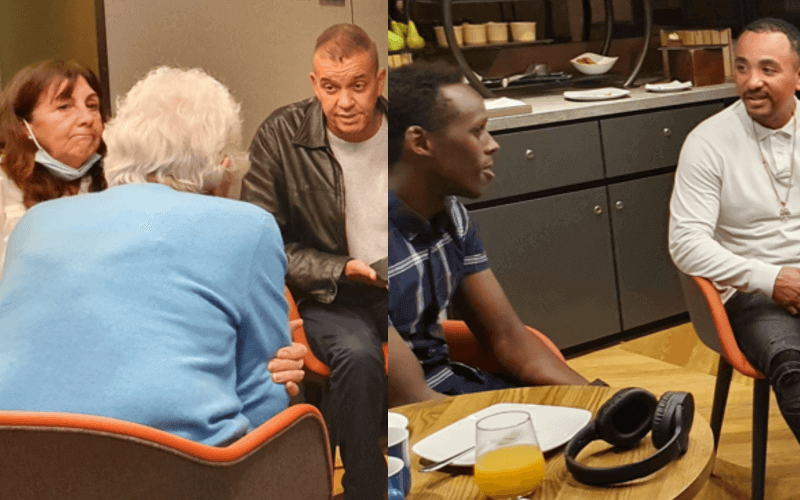 The families of disabled benefit claimants whose deaths have been closely linked to the actions of the Department for Work and Pensions (DWP) have met for the first time after visiting a ground-breaking digital exhibition.

The Museum of Austerity uses the families’ verbal testimony – and “volumetric capture” techniques that have produced high-quality holograms – to recreate the circumstances that led to the deaths of eight claimants in the decade of austerity from 2010.

Several of the families met at a central London hotel on Friday as guests of the English Touring Theatre and the National Theatre’s Immersive Storytelling Studio, which have produced the exhibition.

Each of them then experienced the exhibition for the first time.

Most of the relatives had never met each other before, and they spent hours sharing their experiences.

Alison Burton, who has led the campaign for justice for her father-in-law Errol Graham, who died three years ago, said: “To be in the room with people who are suffering exactly as you are, you feel normal.”

Jill Gant, whose son Mark “lost his benefits and his life due to the failure of the DWP’s fitness for work assessment process”, said the exhibition had been “deeply moving and powerful”.

She said: “I was so grateful for the opportunity to experience not just Mark’s story but the others’ too.”

She said that meeting the other families had been a “heart-warming experience”.

Gant, who was accompanied by Mark’s sister Cathie, added: “I seriously hope that this exhibition is seen by many people, including those responsible for making and implementing DWP policy in this area.”

Mo Ahmed, whose sister Sophie also features in Museum of Austerity, said the exhibition was both “powerful” and “emotionally draining”.

He said: “I challenge anyone to be in there and not be moved by all the stories.”

He said the exhibition could be “as close as we are going to get to justice”.

It is hoped that the exhibition, directed by critically-acclaimed theatre director Sacha Wares and still a work in progress, will tour the UK, and will also be seen in other countries.

Lee Burton, Errol’s son, said the exhibition was the first time he had listened to his wife, Alison, being interviewed about his father’s death, which included her description of identifying his body.

He said: “When I heard her speaking and the rawness of it, that really hit me because I didn’t know how much she had been suffering.”

He added: “I think it will touch masses of people. It was really emotional.”

Alison said the exhibition had recognised who Errol was and the “pain and suffering he endured” in the months leading to his death.

She said: “When you walk in that room, everything just hits you.

“It’s overwhelming, but I don’t regret it at all. For that 30 minutes, I didn’t feel alone.”

Gill Thompson, whose brother David Clapson is represented in the exhibition, said the images were “so real” and the story of what happened during the decade of austerity was “explained so well”.

But she said she could not believe that claimants were still dying, a decade after the death of Stephen Carré.

Stephen Carré’s story is summarised at the entrance to the exhibition, alongside a timeline of some of the key political moments from the decade of government-imposed austerity.

Imogen Day, whose sister Philippa died in 2019, said the exhibition was a “distressing” experience but also “absolutely stunning”.

She said: “They managed to turn so many tragedies into a rallying call.”

Philippa’s mother Jane said: “I feel very angry, but I am also amazed at the skill and artistry that it took.”

Imogen added: “It just feels needless that [DWP] knew about this suffering for so long and nothing changed.

“The negligence is so extensive that it feels deliberate.”

*John Pring, editor of Disability News Service, is specialist advisor and co-editor of the exhibition