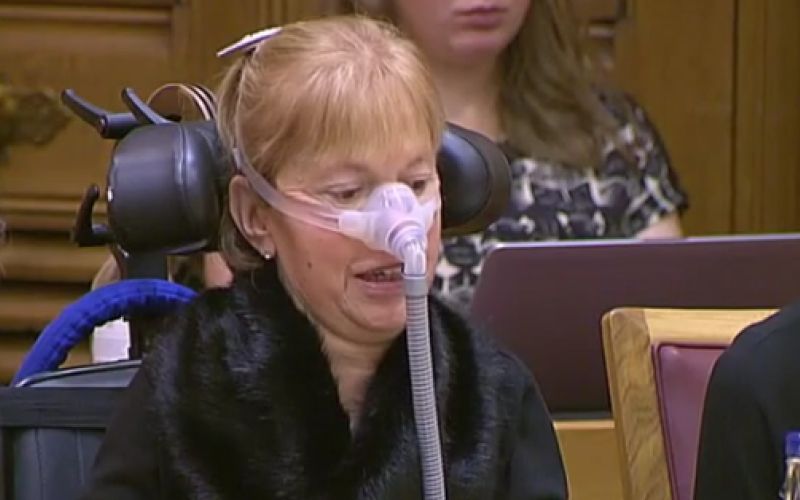 A disabled peer has called on the government to hand out fewer “carrots” to employers and do more to enforce existing equality law as it attempts to secure more jobs for disabled people.

The plea came after Justin Tomlinson, the minister for disabled people, had been explaining the merits of the government’s Disability Confident programme in persuading organisations to employ more disabled people, which now includes organising what he calls “reverse jobs fairs”.

Tomlinson was one of three ministers giving evidence to the Equality Act 2010 and disability committee, set up by the House of Lords to examine the impact of the act on disabled people over the last five years.

But the disabled crossbench peer Baroness [Jane] Campbell (pictured, at the committee hearing) told Tomlinson: “I really don’t want to burst your bubble but as you were talking there I was transported back to my days at the Disability Rights Commission, where we were doing exactly the same things: we held jobs fairs, in fact it was like you were there beside me.

“I trained 120 trainers to go round the country to talk to employers about being disability confident when I was working in local government 25 years ago.

“What makes you think you will change people’s minds now, and don’t you think it is also time to ramp up the stick?”

Baroness Campbell said that disabled people who had given evidence to the committee had made it clear that the government’s carrot-based approach “will not change things substantially”.

She said: “We must enforce the law. I think that’s where they feel the government is letting them down.”

She added: “I feel there are too many carrots being handed around at the moment, so where are the sticks?”

Tomlinson said the government would make a substantial investment in Access to Work, and there were 339,000 more disabled people in work in the last two years, while ministers were reforming the Work Programme and Work Choice through the new work and health unit, with a white paper to be published in the new year on employment support for disabled people that was likely to include demands for “greater local flexibility”.

He said: “I accept the point that there has always been business engagement. I don’t think there has been enough with the small and medium-sized employers.”

When Baroness Campbell asked if enforcement of the Equality Act would be part of the white paper, Tomlinson said: “Yes.”

Nicky Morgan, the education secretary and minister for women and equalities, added: “The first thing we want to do is change cultures and behaviours.

“I am not always convinced that sticks and enforcement are the right way to do this. They are a necessary backstop.”