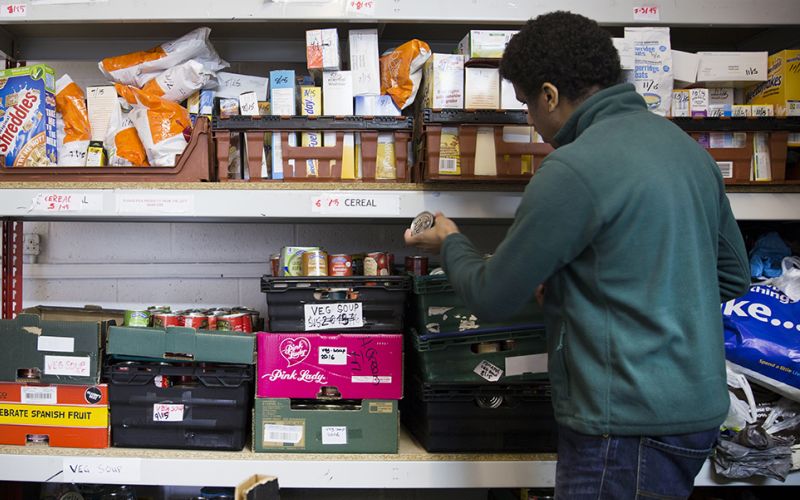 The authors of a major new study have called on the government to launch an inquiry into whether disability benefit payments should be increased, after finding more than half of the people who use foodbanks are disabled and unable to work.

The study says that foodbank-users are mostly from groups heavily affected by the government’s welfare reforms: disabled people, lone parents, and large families.

It says the study’s results may suggest that “current welfare support for disabled people is insufficient to ensure that such individuals are not left destitute”, and that they are particularly at risk of “deep poverty and severe food insecurity”.

And it warns that further cuts to the real terms value of benefits – a freeze on many benefits is set to last until 2020 – “will only serve to exacerbate the problem of food insecurity”.

The report, Financial Insecurity, Food Insecurity, And Disability, was carried out by the anti-poverty charity The Trussell Trust and academics from the universities of Oxford and King’s College London, and is the biggest nationwide study of foodbank use yet to be carried out.

It found that more than two in five foodbank-users were claiming employment and support allowance (ESA) – the out-of-work sickness and disability benefit – and most were in the ESA work-related activity group (WRAG), for those sick and disabled people found able to take steps towards employment.

Almost three times more WRAG claimants use foodbanks than the proportion in the general population.

But the proportion of those in the ESA support group using foodbanks was lower than in the general population.

The study also says that claimants subject to benefit sanctions – such as those in the WRAG or claiming jobseeker’s allowance – are more likely to use foodbanks.

The authors say that the high proportion of WRAG claimants using foodbanks was “particularly a cause for concern” because the research was carried out before the government implemented its latest cut to disability benefits, when it reduced weekly payments to new claimants in the WRAG by nearly £30 a week, in April this year.

They add: “This may result in even more ESA claimants having to use food banks.”

The authors conclude that benefits are now too low to ensure that many claimants can afford their basic needs, particularly disabled people.

The Trussell Trust called for a review of the financial support provided for those in the WRAG, and for a renewed commitment to efforts to support disabled people into work.

The authors also found that nearly two in five people using foodbanks were waiting for a benefit payment, with most waiting between two and six weeks, although a fifth had been waiting seven weeks or more.

A third of these delays were for people waiting for ESA payments, usually – again – those in the WRAG.

The study involved more than 400 households that had been referred to 18 foodbanks across England, Scotland and Wales.

The authors conclude: “The severity of poverty observed and what it means for people’s ability to acquire sufficient and adequate food is a serious public health concern.”

Philip Connolly, policy manager for Disability Rights UK, said: “More than half of food bank users are disabled people or those with a long-term health condition.

“The initiative by Trussell Trust shows that society is reaching out to them, but they must wonder why there is a government denying them adequate social protection.”

The Trussell Trust runs a network of over 428 food banks which provide three days’ nutritionally-balanced food and support to people in crisis, all of whom will have been referred by a professional such as a social worker, health visitor or school liaison officer.