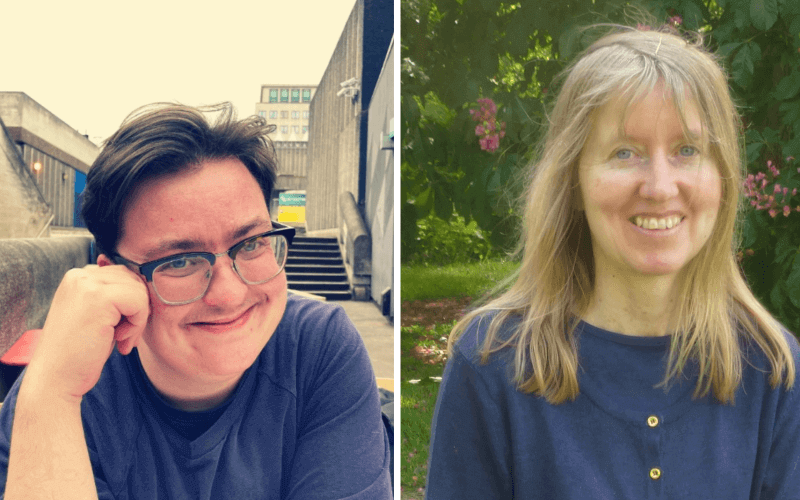 Its launch comes at a time of crisis for user-led mental health groups, with more than 200 of NSUN’s member organisations having closed down between 2019 and 2021, with their problems now worsened by the cost-of-living crisis.

NSUN says that groups led by people with mental health difficulties play a vital role supporting people in the bleakest and most difficult moments of their lives, and yet these groups are experiencing a crisis of their own.

It says: “Across the country, they are disappearing through lack of funding, lack of understanding and lack of support from both the public and from funders and the public sector.”

Ruairi White (pictured, above, left), project manager at NSUN, said the network had “tried to make the application process as simple and straightforward as possible – proportionate to the relatively small amount of funding on offer (grants of £500-£1,000).

He said the fund will instead set groups free from the burdensome application procedures and requirements of traditional grant-giving bodies.

White said: “It does not, for example, require groups to have extensive financial data or bank accounts and nor does it compel them to carry out ‘new and innovative’ projects that divert them away from their core – and often niche – work.”

He added: “User-led groups do not have a lot of capacity – many are run by a small number of volunteers and there is often no staff member whose sole focus is fundraising.

“This can make applying for traditional funding an arduous and daunting task.”

According to White, the Covid-19 emergency grants have not helped network members over the longer term and have even caused some to be more stretched than ever after enticing them to expand their activities in response to funding opportunities that were then discontinued.

Suicide Crisis, an award-winning centre providing 24/7 face-to-face and phone support in Gloucestershire to people at risk of taking their own lives, is one NSUN member challenged by the current funding system.

Joy Hibbins (pictured, above, right), founder and chief executive of Suicide Crisis, said: “Some of the most innovative and impactful work in mental health is being created and carried out by user-led organisations and yet user-groups often struggle to attract funding.

“There are often many barriers to us accessing funding from traditional funding providers.”

She added: “It’s particularly vital and relevant that the NSUN grants are available now at a time of increased need for our services because of the cost-of-living crisis.

“This will increase people’s suffering and vulnerability this autumn and winter and we are already seeing more people in crisis.”

While Suicide Crisis has managed to continue operating and remain independent of statutory funders, many other mental health user groups have folded.

Hearts and Minds, a user-led group dedicated to supporting younger people with mental distress in south-west London, is one of the grassroots groups that has had to close.

After four years of working with isolated and marginalised teenagers and young adults seeking an alternative to NHS mental health care, the group shut its doors for the last time in January this year owing to a lack of funds.

The group’s mid-2018 impact report quoted one 25-year-old man saying: “It’s provided me with a safe space where I feel like I can just be myself with my struggles.

“I’m a lot more confident. Out of my head and happier.”

The loss of such groups leaves some areas without a community-based alternative to NHS mental health care.

White said: “There is a mutuality and genuine compassion and understanding there [in user-led groups] that can be absent from the statutory services, where power imbalances between professionals and ‘service users’ are ever-present and the risk of coercion is very real.”

She said many clients at Suicide Crisis are keen to know the service is not funded, controlled or influenced by the state in any way.

John, who accessed face-to-face appointments at Suicide Crisis and benefitted from its flexible and individualised support, said: “Suicide Crisis saved my life. There’s no two ways about it.

“They were always there for me – 24 hours a day. I am still here because of the help, support and encouragement that I have received from them.”

The £19,700 pot of money being distributed through the new fund was given to NSUN by Mind via its PeerFest event, an annual celebration of peer support.