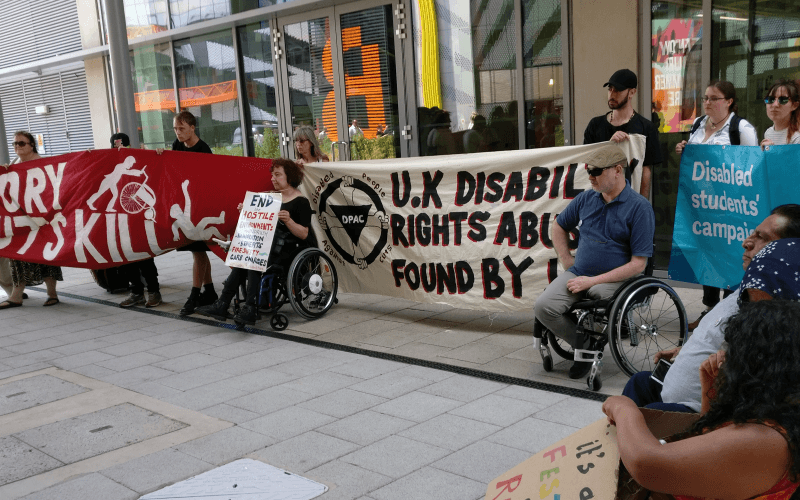 Disabled activists have held a “festival of resistance” outside an international disability rights event to highlight the “hypocrisy” of it being co-hosted by the UK government.

Members of Disabled People Against Cuts (DPAC) and allies were outside the Here East centre on the Olympic Park in the east London borough of Newham, as hundreds of delegates from across the UK and the global south took part in the Global Disability Summit.

Among those speaking at DPAC’s protest (pictured) were disabled activists from Greece, Bolivia and Uganda, and an anti-poverty activist from Canada, who had all spoken at DPAC’s own International Deaf and Disabled People’s Solidarity Summit in nearby Stratford two days earlier.

Paula Peters, a member of DPAC’s national steering group, said: “It is important to be outside the Global Disability Summit to show the true nature of what the UK government are doing to disabled people with their austerity agenda.”

She pointed to the two reports from the UN’s committee on the rights of persons with disabilities (CRPD), in 2016 and 2017, which had exposed the impact of the cuts on disabled people.

The first of the reports, in November 2016, found the government had committed “grave and systematic violations” of the UN Convention on the Rights of Persons with Disabilities through its policies on independent living, social security and employment.

The second, last autumn, assessed the government’s overall record on implementing the convention, produced an unprecedented number of recommendations for improvements, and led the committee’s chair to tell the UK government that its cuts to disabled people’s support had caused “a human catastrophe”.

Ellen Clifford, who helped organise DPAC’s International Deaf and Disabled People’s Solidarity Summit, which took place two days before the government’s summit (see separate stories), had said that holding the Global Disability Summit so soon after the UN report was like the UK government “sticking two fingers up to the UN”.

But she said she welcomed anything positive that came out of the summit and was “particularly in favour of deaf and disabled people and our organisations making direct links internationally to support each other in our shared struggles.”

She said this could only be done “from the grassroots up”, which was why DPAC had hosted its own summit.

Clifford said that the Department for International Development, which had co-hosted the summit, had said DPAC activists could come inside the summit but would only be allowed in “if you don’t mention the UK government”.

DPAC rejected the invitation, and instead, the International Disability Alliance (IDA), an alliance of disabled people’s organisations which co-hosted the summit, supported DPAC in ensuring that its leaflets were distributed inside the summit.

The leaflets told delegates that the UK government had shown “contempt” for disabled people and the UN convention, had driven its “disabled citizens into degrading and inhumane conditions” and that it appeared to be “attempting to use this event to whitewash its appalling record on disability at home”.

Peters said the UK government was not talking about the two UN reports in its summit, and added: “The sun never sets on their hypocrisy. They are abusing our human rights at home.

“The cuts are killing us. We had to be here to show that, to show the truth.”

De Cordova pointed out that the Global Disability Summit was being hosted by Penny Mordaunt, the international development secretary, who had been minister for disabled people when CRPD produced its two reports in 2016 and 2017.

She said she was at the DPAC protest because ministers were “portraying themselves as being global leaders on disability rights”.

She said: “We know that is not the case. Their policies have been condemned by the UN.”

She said the government’s policies over the last eight years had “disproportionately hit disabled people, particularly on social security”.

De Cordova also pointed to the Charter for Change, the summit’s “principal legacy document”, which the UK was asking other governments and organisations to sign up to.

She said the UK was violating eight of the charter’s 10 commitments, including the pledge to “gather and use better data and evidence to understand and address the scale, and nature, of challenges faced by persons with disabilities”.

The UK government has persistently refused to carry out a cumulative impact assessment of its social security and tax cuts and reforms since 2010, even though the Equality and Human Rights Commission published its own version in March.

He told them: “If there are any cuts to social welfare, how come they start with the most vulnerable, people with disabilities?”

Mwaura, a former student at the University of Leeds, said that disability was about “rights, respect and dignity”.

He said: “I tell you in solidarity, demand for your rights, let the UK government also implement the recommendations of the UN report for the CRPD.

“That way, the UK government will be providing leadership, the way it is purporting to do together with my government on the conditions of people with disability.

“Disability is about rights, it is about respect, it is about dignity, we will stand in solidarity with you, we refuse to accept the north and south divide, where some countries are seen to be better than others, yet the problems of disabled people are universal and common to all of us.

“We have to stand up and demand our rights: nothing about us without us.”

Dr Ju Gosling, artistic director of Together! 2012, a social enterprise led by Newham-based disabled artists, was one of several disabled artists who performed at the protest.

She said that Newham was the main London 2012 host borough and has one of the highest proportions of disabled residents in the UK, but that the promised “legacy” benefits of London 2012 to disabled people in Newham had yet to appear.

Instead, she said, “we have the highest percentage of homeless residents in the country, the vast majority of whom have an impairment or a long-term health condition, and the lowest level of cultural engagement.

“There is no funded disabled people’s organisation or centre for independent living; in fact, there is almost no advice and support available of any kind.”

Gosling pointed out that the Global Disability Summit organisers did not appear to have invited any local organisation of disabled people to the summit, including Together! 2012.

And she said there had also been no attempt to facilitate meetings between disabled people from the global south visiting the summit and Together! 2012.

She said: “In Newham, we have disabled people from all over the world and they would love to have had a discussion and could have really enriched the understanding of the visitors about what it is like to be disabled in the UK.

“Presumably that’s why we were not invited.”

Representatives of IDA attended the DPAC protest and said they were there “in solidarity”.

An IDA representative said: “IDA agreed to co-host because we wanted DPOs, including UK DPOs, to be a central part of the summit.

“And we have achieved this. DPOs from across the global, and including UK DPOs, have been key to the success of this summit.”

But she added: “We cannot ignore the findings of the CRPD committee.”

She said IDA was hoping to set up a meeting between DPOs including DPAC, the Department for Work and Pensions and Mordaunt’s Department for International Development.