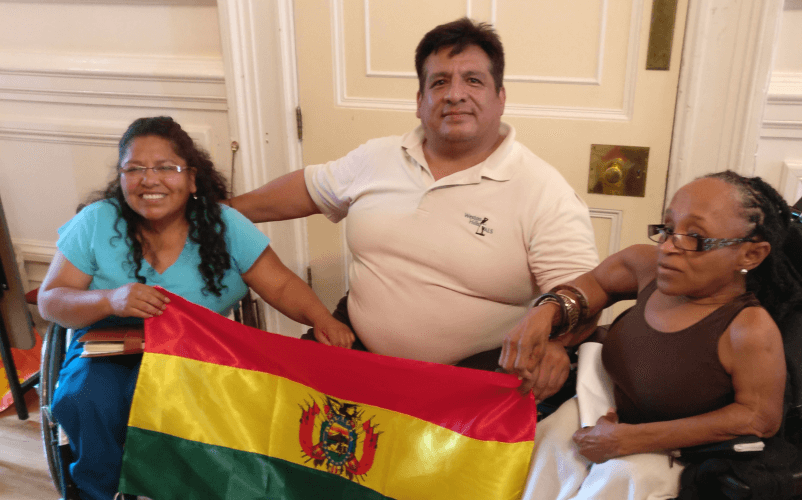 Representatives of national disabled people’s organisations (DPOs) in Bolivia, Greece, Malaysia and Uganda have described to UK activists how they have fought oppression and discrimination in their own countries.

They were speaking at an International Deaf and Disabled People’s Solidarity Summit in east London, organised by Disabled People Against Cuts (DPAC) to highlight the hypocrisy of the UK government’s decision to co-host a major “global disability summit” on the Olympic Park in east London this week.

Feliza Ali Ramos (pictured, left) and Alex Marcelo Vazquez Bracamonte (centre), both wheelchair-users, from the Bolivian DPO New Hope, described how – two years ago – they and fellow disabled activists marched 300 miles through the Andes to the capital La Paz to confront president Evo Morales about the conditions facing disabled people in Bolivia and to seek an increase in disability benefits.

Conditions facing disabled people in Bolivia were harsh, they told the summit.

Many were dying from treatable conditions, some because doctors refused to give them oxygen, with families often welcoming their early deaths “because they were suffering anyway”.

Local campaigns had called for the monthly disability benefit payment to rise from about £10 to about £50 a month, which led to the march on La Paz.

They marched through the mountains for 35 days and often had nowhere to sleep, while their only food was what they were given by people from the towns they passed through.

When they arrived in the capital, they found the government had put up metal barriers to prevent them reaching the central square where the government offices were located.

The square was guarded by police with water cannons and riot shields, and they were sprayed with pepper spray and water cannons, beaten and pushed out of their wheelchairs.

Refused a meeting with the president, they pitched tents and took part in a vigil that lasted more than three months.

The government tried to infiltrate the movement, and threatened activists with 10 years in prison.

Morales eventually backed down and agreed to some of their demands.

Ramos told fellow activists at Sunday’s summit how they lost two of their colleagues in a traffic accident during the march while another four had died because their health deteriorated during the protest.

She cried as she told the summit: “Because these comrades had given their lives we fought on and we too were prepared to give our lives.

“We remember what we went through and every day it moves me.

“All of a sudden we have made ourselves visible in Bolivia and have got coverage in its media.”

Last week, she said, there was national media coverage of a case in which a young man with cerebral palsy was found severely malnourished.

She said: “Before, it would have been ignored. Now it is a national scandal because of what we did.

“We have shown the whole of society we are strong and are not prepared to shut up and do whatever the government tells us to do.”

New Hope was founded in 1999 to fight for an independent life for all disabled people in Bolivia, and its members try to empower disabled people with physical impairments through their Independent Life programme.

Antonios Rellas, from the Greek DPO Zero Tolerance, told Sunday’s summit how he was the only disabled activist who gave evidence in the long-running trial of MPs and members of the extreme-right Golden Dawn party.

He said: “As disabled activists, we know very well the story behind the fascist danger.

“Golden Dawn followed exactly what Hitler and the Third Reich believed. Some of the first victims of the Third Reich were disabled people who were killed, 275,00 of them, as unworthy to live.”

He also described his organisation’s ongoing fight against the institutionalisation of disabled people in Greece, which saw Zero Tolerance fight for the freedom of disabled residents who were being over-medicated and chained to cages in a state-run institution in Lechaina.

He has directed a documentary which exposes the conditions, with Rellas and other disabled activists occupying the institution for four days and demanding that they were released.

Now those disabled people who have been released from Lechaina have been found homes “in places where they can lead regular lives”, he said.

But he said that more than 900 disabled people were still living in similar conditions in state-run institutions in Greece.

He said: “The institutions that we are talking about are public institutions. We don’t know what is happening in private and church facilities.

“This has nothing to do with the financial crisis that Greece is under. This was happening before this happened and if we are not there to resist and provoke it will stay like this forever.”

Naziaty Yaacob, from Harapan OKU (Hope for Persons with Disabilities), speaking via Skype, told of her organisation’s battle to fight systematic discrimination against disabled people in her country following the election in May of the first new government in Malaysia in 60 years.

They wrote an open letter to the new prime minister, with support from more than 100 charities, telling him that disabled people were “still struggling to achieve independence” and were “still facing barriers and discrimination”, with disabled people the most marginalised group in society.

They highlighted the “toothless” nature of the existing disability discrimination act and the need for a new act and an independent commission to deal with grievances and systemic discrimination.

Rose Achayo, from the National Union of Women with Disabilities of Uganda, described the wide-ranging discrimination faced by disabled women and girls in her country.

She told the summit that her organisation had formed in 1999 to be a voice for disabled women and girls and to push for “a society where girls and women with disabilities lead a dignified life”.

She also pointed to the stigma and “invisibility” faced by disabled women and girls in mainstream society, and their lack of access to the main source of income: land.

But she said that, unlike the UK government, the Ugandan government had acknowledged issues raised by the UN committee on the rights of persons with disabilities and had come up with a plan for how they could be addressed.

The committee examined Uganda’s progress in 2016, a process her organisation took part in.