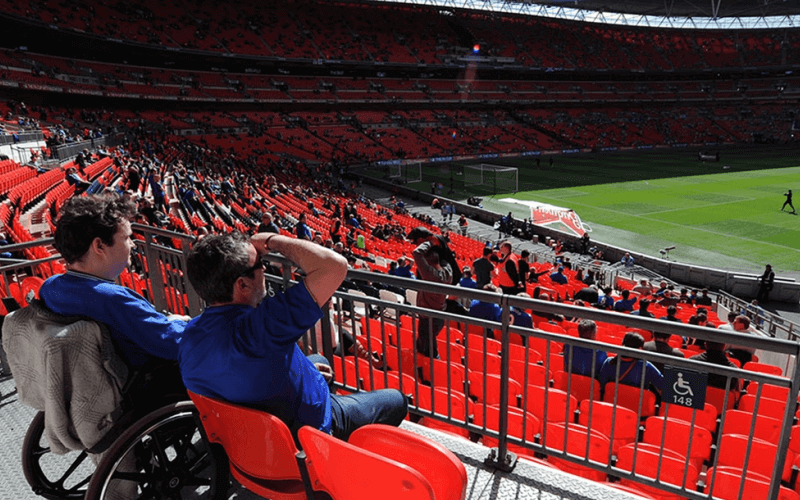 The government is facing fresh accusations of disability discrimination, after apparently banning people who are “clinically extremely vulnerable” to COVID-19 from attending all nine of its sports, cultural and business “test” events.

The nine events are taking place over the next month and are being used to trial different approaches to allowing crowds to return safely to venues as part of a pilot scheme, the Events Research Programme (ERP).

Among the events that will be used to test how different types of venues can reopen safely as part of the government’s “roadmap” out of lockdown are the world snooker championships in Sheffield, which begin on Saturday, and football’s Carabao Cup final between Spurs and Manchester City on 25 April.

LPF said it viewed the move as “an attack on freedom of choice and human rights”.

The government’s decision that those who are clinically extremely vulnerable (CEV) to coronavirus – and those who are pregnant, or under 18 – should not attend the test events was not included in the press release that provided details about the programme.

But LPF noticed a warning on the World Professional Billiards and Snooker Association (WPBSA) website, which says that ticket holders have been told by email: “Unfortunately, it is not possible for us to allow you to attend this event if you are classed as clinically extremely vulnerable, pregnant or living with somebody who falls within these categories.”

LPF said this decision had “taken away the free will of a person to decide if an event is safe for them or not”.

LPF later learned that CEV people had also been told that they should not apply for tickets to the Carabao Cup final at Wembley Stadium (pictured).

Tony Taylor, LPF’s chair, said the government’s move sets a “potentially discriminatory precedent” and “detracts from the message of tackling discrimination [and] promoting equality and devalues the importance of personal choice”.

He said the actions to exclude fans who are CEV “present a very credible risk that sections of the football supporting community will continue to be excluded by society as lockdown eases”.

He added: “Level Playing Field acknowledges that safety is vital to the programme of reopening, but this must include freedom of choice and must not be discriminatory.”

Rosie Loker, co-chair of the Women’s Equality Party’s disability and long-term health conditions caucus, said it was “frustrating” to hear the government preventing CEV people from the events “whilst simultaneously ending shielding, taking away support and forcing some back into the workplace”.

She said: “This mixed messaging does very little for disabled people’s confidence that government will not leave them behind again as we emerge out of lockdown.

“CEV, disabled and pregnant people continue to be active in sports, business and a range of cultural events both as participants and spectators.

“To ban us from the ERP risks continuing to exclude us from public life for the foreseeable future.

“It shows no plan for how these groups can return to contributing to society and continues the onslaught of discrimination these groups have experienced, both prior to and during this pandemic.

“A one-size-fits-all approach takes away our agency. We believe the policy needs to be more nuanced.

“Individuals ought to be able to make their own decisions, with the advice of their medical advisers, on what activities are safe for them to attend in person.”

Chris Fry, the disabled founder of discrimination law experts Fry Law, also raised concerns about the decision to ban CEV people from the world snooker championships, which he suggested could be “direct discrimination against disabled people”.

He also suggested that if the policy was imposed on the tournament by the government, there could be grounds for legal action through a judicial review.

And he warned that the government’s pilot programme could be used to set rules for other venues across the country when they re-opened to the public after lockdown.

Fry wrote in a blog: “The impact of this policy will be significant as it is likely that the same criteria will be applied to the re-opening of other venues, meaning that disabled people will be shut out of events.

“This is not acceptable within a society mandated by law to make itself more accessible and inclusive.”

The World Snooker Tour – which runs the world snooker championships – refused to comment on the ban, but directed Disability News Service (DNS) to a statement by the Department for Digital, Culture, Media and Sport (DCMS).

A DCMS spokesperson told DNS: “These pilots are the first steps to helping all members of the public safely back to mass events.

“While they were designed to be as inclusive as possible, we have been advised that it would not be suitable on health grounds for the clinically extremely vulnerable to attend such pilot events and potentially be put at greater risk of transmission.”

DCMS said the programme was designed in line with Public Health England and Department of Health and Social Care guidance.

It said that those who were CEV, living with someone who was CEV, pregnant, or under 18, were advised not to attend the pilot events because some of those events would be testing non-social distancing and the safety risk associated with relaxing “non pharmaceutical interventions”.

But DCMS had refused by noon today (Thursday) to confirm if it was banning CEV people from all the test events or instead just advising them not to attend, whether it accepted that its actions were discriminatory, and why it failed to mention the ban or advice in its press release about the ERP.