You are here: Home / Benefits and Poverty / Government’s 2016 welfare reforms ‘had devastating impact on disabled people’ 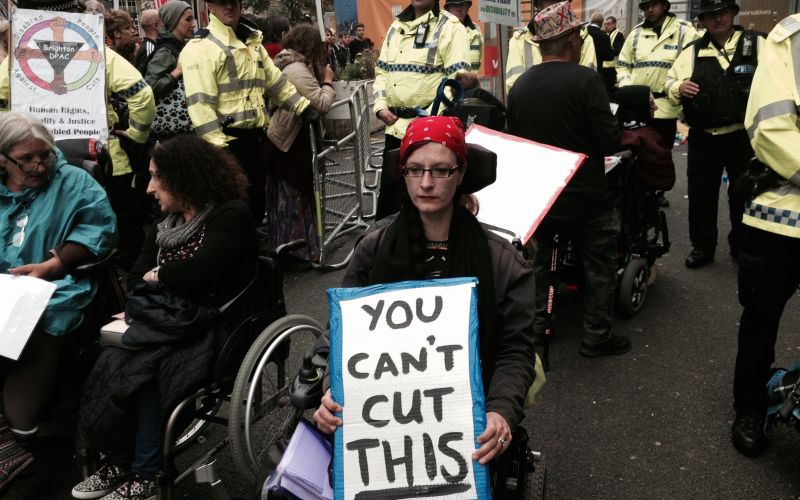 Government welfare reforms introduced in 2016 have had a “devastating” impact on disabled people and others in low-income households over the last five years, according to a new report by a group of MPs and peers.

The report (PDF) by the All-Party Parliamentary Group on Health in All Policies, which draws together research from numerous sources over the last five years, was described this week as “stark” and “hard-hitting”.

It focuses on the impact of five key measures within the Welfare Reform and Work Act 2016, including cuts to the benefit cap; freezing certain benefits for four years; and cuts of almost £30 a week to disabled people placed in the work-related activity group of employment and support allowance (ESA).

The report says that the “disproportional, negative” impact on disabled people and children was “reprehensible”, and it adds: “The increase in social-security driven poverty has been mirrored by a deterioration in our health status as a country, one of the few advanced economies where since 2018 life expectancy has been flatlining.”

It concludes that the act has pushed many low-income households into poverty, and has caused increased debt, rent arrears, food-bank use, homelessness, and a negative impact on mental health.

It also says that the treatment of benefit claimants by the Department for Work and Pensions (DWP) often leaves them feeling worthless and even “dehumanised”.

Ellen Clifford, a member of the national steering group of Disabled People Against Cuts, told the report’s online launch event: “The APPG has succeeded in producing such a stark report that cuts through the spin and selective use of figures that have too often been used to disguise the true impact of welfare reform and it presents a very hard-hitting portrait of Britain today.”

She said the report showed that the “more disabled you are… the harder you are hit” by the measures in the act.

Clifford, co-chair of the Commission on Social Security*, pointed to one of the new report’s key recommendations, for the government to extend the £20 a week rise given to universal credit claimants during the pandemic to those on “legacy benefits” such as ESA.

She said that many of those refused the uplift were disabled people who have seen their spending rise sharply during the pandemic, through having to pay for essentials such as personal protective equipment for their personal assistants or for online deliveries of food.

She said: “At DPAC we think we urgently need to pressure the government into extending that to legacy benefits.

“There’s no question that the failure to do so has been deeply detrimental to disabled people’s health.”

On Monday (1 March), DPAC is holding a day of action as part of its #20MoreForAll campaign, which includes asking supporters to email their MP to tell them why it is important that the uplift is extended to legacy benefits.

It is also hosting a survey on the impact of the failure to extend the uplift.

Among its recommendations, the all-party group repeats calls from the disabled people’s movement, and many others, for an assessment of the cumulative impact of the government’s cuts and reforms on disabled people.

It also says DWP must change its culture “from one that is perceived to ‘dehumanise’ claimants to one that trusts, supports and enables claimants” and must “develop systems and practices… which identify and support vulnerable claimants at all stages of their application and claim”.

And it repeats calls for the Equality and Human Rights Commission to launch an inquiry into the deaths of benefit claimants between 2008 and 2020 that have been linked to DWP’s actions.

Disabled activist Rick Burgess told the launch event that it was also crucial to consider, when examining the impact of the government’s welfare reforms and cuts, what it was like to be “an oppressed group” that has been subjected to “democide or social murder, particularly during the pandemic, when we are 60 per cent of the deaths”.

He said: “I would like people to understand there needs to be some process of truth and reconciliation.

“We cannot simply stop oppressing people, we have to acknowledge that was done, and reparations have to be made, because it’s about respecting people who you have dehumanised in the past.”

Debbie Abrahams, chair of the all-party group and a former Labour shadow work and pensions secretary, said: “Our report shows there is strong evidence from several sources that the cuts in social security support have contributed to increasing poverty and financial hardship in low-income households which has particularly affected the poverty levels of children and disabled people.”

*The Commission on Social Security was launched in 2019 to develop a new social security system, in which claimants would be treated with dignity, trust and respect. All of its commissioners have lived experience of the benefits system

Picture: Anti-cuts protesters outside the Conservative party conference in Manchester in October 2015