You are here: Home / Benefits and Poverty / Green refuses three times to apologise to Scotland for harm of benefit reforms 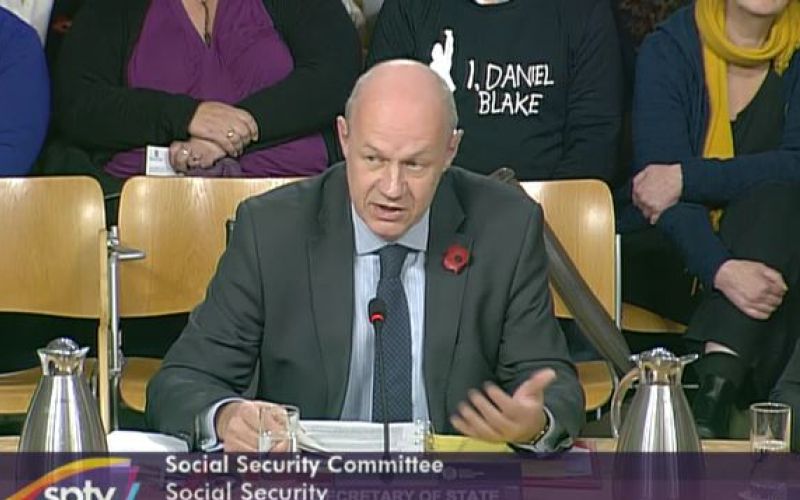 The work and pensions secretary Damian Green has refused three times to apologise or even acknowledge the distress and harm caused by his government’s welfare reforms and cuts, during an appearance before MSPs.

Green became the first work and pensions secretary to appear before a Scottish parliamentary committee, when he gave evidence to the social security committee on Thursday (3 November).

For the first part of the 80-minute evidence session, his refusal to acknowledge the harm caused to sick and disabled people was highlighted on the live television coverage by a member of the public sat behind him who was wearing a tee-shirt promoting Ken Loach’s award-winning film I, Daniel Blake.

Another visitor, John McArdle, co-founder of the grassroots campaign group Black Triangle, had also taken off his coat to reveal the same slogan, until both of them were asked by parliamentary staff to cover or remove their tee-shirts.

SNP’s Ben Macpherson asked Green if he wanted to apologise for the “unnecessary and highly disturbing anxiety, suffering and hardship that many of our constituents have faced since 2010, particularly [through] the work capability assessment [WCA], sanctions and cuts and the wider austerity agenda”.

But Green ignored the request and instead described proposals from his new work, health and disability green paper.

He said he hoped the WCA proposals in the green paper would “make it do its job”.

Macpherson then told Green that I, Daniel Blake – which tells the story of a man with a heart condition who becomes caught up in the unfairness of the WCA system – was not the “work of fiction” he had described it as.

He asked whether he could at least acknowledge the “the suffering and distress that has been caused to many individuals”.

But Green refused to do so and said the system was “there to help people” and it was “not the intention of anyone connected with the welfare system… to cause distress”.

The work and pensions secretary was also forced to defend his government’s plans – revealed last week by Disability News Service (DNS) – to consider forcing all sick and disabled people on out-of-work disability benefits to take part in “mandatory” work-related activity.

Green failed to respond to the concerns about “mandatory” work-related activity, but appeared to suggest that the proposal was a result of too many people being found not fit for any work-reated activity and therefore placed in the employment and support allowance (ESA) support group.

He said that the Labour government which introduced the WCA and ESA had intended that only about 10 per cent of claimants should be placed in the support group, whereas about 50 per cent were being found not fit for work or work-related activity*.

Green said that it was this group of people – the “40 per cent” difference – who should not think, “I have been told I can never work. I will never work again.”

He added: “Many of those people could work, certainly for part of the time, and would benefit from work, their lives would be made better.

“So those are the type of people we want to keep in touch with so that they don’t feel that they have been just left by the system.”

When another SNP committee member, George Adam, asked him about the “horror stories” of the current assessment system, including cases in which disabled people have been driven to take their own lives, Green criticised what he said was an attempt to “politicise individual tragedies”.

Adam told Green that he had a copy of a book version of I, Daniel Blake, signed by its screenwriter Paul Laverty – who had attended the session – to give him, which Green said was “very touching”, although it was not clear if he was being sarcastic.

Adam said Laverty had told him it was “based on research” and that “we can actually back it up as constituency MSPs [with] some of the horror stories that are coming from your so-called welfare reform”.

Before the evidence session ended, the committee’s convener, SNP’s Sandra White, again challenged Green’s reluctance to accept the distress his government’s reforms had caused, telling him: “I have a constituent who unfortunately committed suicide after getting a letter from DWP, so there is evidence in that respect.”

After the session, Macpherson criticised Green’s failure to apologise and his refusal to accept evidence of the “appalling consequences of the Tory welfare regime on people across Scotland”.

He said: “Damian Green’s performance at the committee was shameful and simply confirmed what we’ve long known – the Tories do not care about the damage that their policies are inflicting on poor and vulnerable people across Scotland.”

He added: “In particular, the secretary of state’s lack of knowledge and unwillingness to accept evidence on the cases where his government’s policies have driven people into destitution, and in some tragic cases to suicide, and his defence of the failed benefit sanctions regime, showed just how out of touch and cruel this Tory government truly is.”

*The latest Department for Work and Pensions figures show that just 33 per cent of claimants are being placed in the support group.

Coffey has no Disability Confidence in her own scheme, DWP list suggests