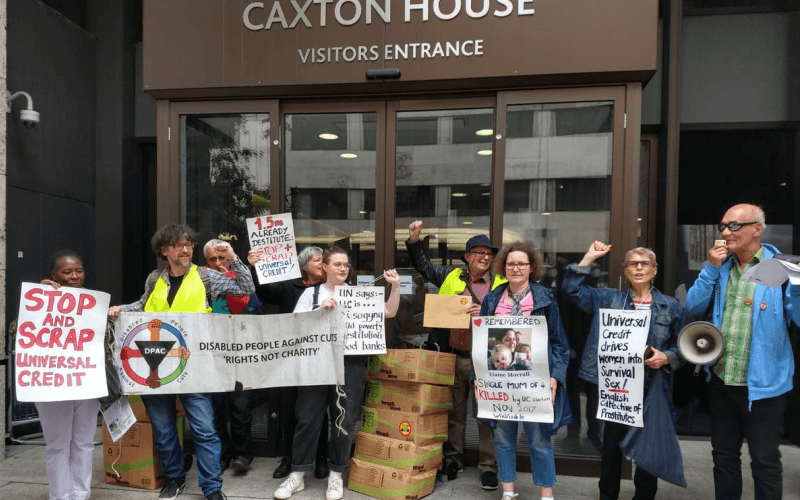 Disabled activists were locked inside the Department for Work and Pensions’ headquarters by security guards as they delivered thousands of copies of a newspaper that feature “deliberately misleading” DWP adverts which “whitewash” the truth about universal credit.

Protesters from Disabled People Against Cuts (DPAC) were unable to leave Caxton House in Westminster for several minutes yesterday (Wednesday) when security guards locked the building’s front doors behind them after they entered the main lobby.

They had entered the building to deliver a letter to work and pensions secretary Amber Rudd, in which they asked her to explain why she had spent hundreds of thousands of pounds on an advertising campaign in the free Metro newspaper that features “one-sided adverts whitewashing the disastrous Universal Credit policy”.

They also delivered about 10 boxes of copies of yesterday’s Metro (pictured), which features the latest Department for Work and Pensions (DWP) advertising feature on universal credit (UC), and which activists had removed from distribution points at train stations and on buses across the capital.

Soon after their arrival, DWP security guards locked the front entrance and threatened to call the police, even though the action had been peaceful and focused only on delivering the newspapers and the letter to Rudd.

The doors were eventually unlocked several minutes later after one of the activists had a panic attack.

The letter to Rudd was finally accepted, and although DWP initially refused to accept the boxes of newspapers, they were later taken inside after being left outside the department’s front entrance.

In the letter, DPAC and allies from Kilburn Unemployed Workers Group asked Rudd “why, when Universal Credit is causing so much suffering and distress, your department chose to throw money at this shameless exercise”.

They added: “We hope that the enclosed materials will provide food for thought as you prepare your response to claimants staring into empty cupboards trying to work out how they can feed themselves and their children, and all those who are wondering why the taxes we pay for collective provision of services are being used in such an inappropriate attempt to rewrite the story of this disastrous policy.”

Paula Peters, a member of DPAC’s national steering group, who took part in the action, said: “They are discrediting people’s real testimonies of going through universal credit.

“I have been outside jobcentres and have spoken to claimants who have been driven to prostitution, destitution and homelessness by universal credit.”

She added: “We will continue to expose their lies and total fabrications and we have to get the truth out there with thorough research and with people’s personal testimonies.”

Yesterday’s action, including the hire of a van to deliver the newspapers, was paid for through a crowdfunding effort launched by Sheffield DPAC, which is set to pay for further such actions.

As DPAC was delivering its copies of the Metro to DWP in London, disabled activists and allies in other parts of the country, including Sheffield and Bristol, posted photographs of copies of the Metro being removed from their distribution points, as part of the ongoing #DumpMetroDWPLies campaign.

A spokesperson for Sheffield DPAC – which has played a significant role in the national campaign – said anger about the Metro adverts was growing, and she thanked those who had donated to the fund.

She said the Metro adverts were “propaganda” and “a deliberate attempt to manipulate public perception” of universal credit.

She said: “I implore people, whether they are claimants or not, to support the #DumpMetroDWPLies campaign against the DWP advertorials.

“People have to be aware that once the government have done targeting us that they will move on to someone else.

Meanwhile, the Advertising Standards Authority (ASA) has confirmed that it is investigating the way the DWP advertising features have been published by the Metro.

Disability News Service (DNS) confirmed last month that DWP breached Civil Service guidelines when it decided to launch the nine-week series of “unethical and misleading” Metro advertorials without including a government logo.

And this week DNS passed a screen shot to ASA showing the home page of the Metro’s website, which featured several UC adverts designed to look like a newspaper investigation and which disguise their DWP origin.

None of the adverts on the website mentioned they were designed and paid for by DWP, which appears to be a breach of ASA rules.

Leaked DWP documents have revealed that the adverts were always designed to be misleading and not to “look or feel like DWP or UC”.

An ASA spokesperson said: “We’re currently assessing a number of complaints relating to these ads, including complaints that challenge whether the ads are obviously identifiable as marketing communications.

“We will establish whether there are grounds for further action in due course.”

Meanwhile, the Disability Benefits Consortium of charities has written to ASA to complain about the “deliberately misleading” advertising features.

The letter dismantles several of the claims made in the adverts, including the claim that it is a “myth” that “Universal Credit doesn’t work”, telling ASA: “These statements omit the thousands of claimants universal credit does not ‘work for’ but instead has driven them into debt, rent arrears, foodbanks, and homelessness.”

A DWP spokesperson told DNS: “Our position is that all our advertising is factual and designed to increase understanding of Universal Credit.

“We consulted the Advertising Standards Authority prior to launching the partnership and have reflected their advice.

“We’ve not got anything further to add.”

On the DPAC action at Caxton House, she said: “You can understand that we’re in a government building, so a group of non-staff members quickly entering the building with large parcels is an obvious security concern.

“Security dealt with the incident quickly and the activists were able to leave the parcels outside the front door, without the need for further action.”

She had already declined to comment when asked what DWP planned to do with the thousands of Metros delivered to Rudd.