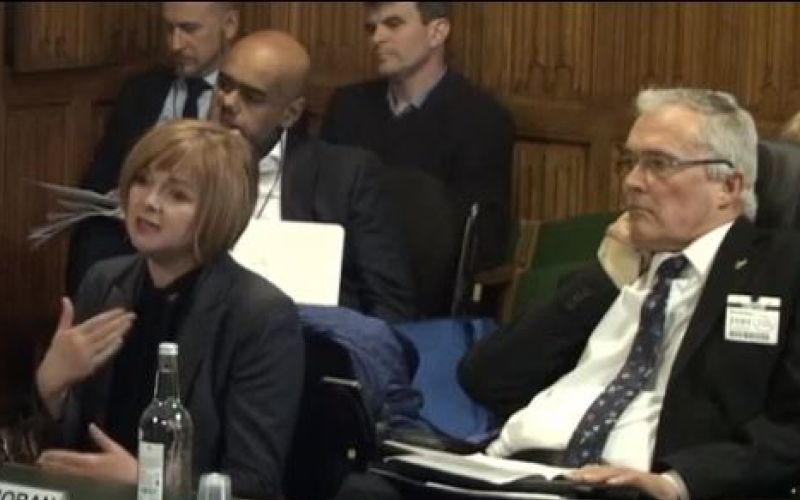 A disabled civil servant has told MPs how her career has stalled because of the failure of the IT systems in the Home Office to cope with the assistive technology she needs to do her job.

Jo-Ann Moran, a senior executive officer in the Office for Security and Counter-Terrorism, told the work and pensions select committee yesterday (Wednesday) that she had been encouraged to apply for promotion but declined to do so because of the IT problems she was facing.

She told the committee that it had been a “culture shock” to “all of a sudden be denied access” after 30 years of full-time employment.

Moran (pictured), who has a degenerative condition that affects her hearing and sight, said: “I am a top performer in my grade and I keep getting told, ‘Come on, go for it,’ but I can’t because I am just not going to be reliable.”

She added: “We just can’t get the assistive technology to work. It’s not through the [lack of] trying, it’s just about the infrastructure being able to cope with the additional technology.”

The evidence session was part of the committee’s inquiry into the role of assistive technology in improving disabled people’s employment rates.

Moran said she feared that if she applied for a job working for a minister, that minister would not be able to accommodate her if she had to say, ‘Sorry, my computer’s not working today.’

“So that’s where my barrier is at the moment. I have employment, I have over 30 years of full-time employment, but I am now too scared to go for promotion.

“I have always done well, I have always been able to overcome, so this has been a real culture shock for me to all of a sudden be denied access.”

She said she was working with a team in the Home Office that was trying to build a new IT system that would allow her to use “as many mainstream integrated systems as possible”.

If that works, she said, “I will be promoted and I will be in SCS [senior civil service].”

Moran was one of four disabled people who gave evidence to the committee about assistive technology.

Another was Dr Stephen Duckworth, a consultant who was previously chief executive of the personal independence payment (PIP) division of the troubled outsourcing giant Capita.

He told the committee that he had tried to recruit disabled people to Capita but found that he was unable to employ blind people because the technology that the Department for Work and Pensions had imposed on Capita through its PIP contract was inaccessible to them.

He said he would like to see a new scheme set up, similar to the existing Motability vehicle scheme, but for those with assistive technology needs.

He said this scheme would be open to disabled people who receive the PIP daily living element, who would then be able to use their monthly payments to fund expensive assistive technology.

Duckworth said this would give “autonomy, power and control back to individuals so they can choose and control how they use that money to invest in their future”.

He said this would “help them take responsibility, not just for independent living, but also for their future employment and contribution that they make back to society”, while it could prevent disabled people being charged one thousand per cent interest rates on loans from payday lenders to fund the purchase of assistive technology equipment.

Robin Christopherson, head of digital inclusion at the technology and disability charity AbilityNet, told the committee the government should do more to enforce existing obligations to ensure digital accessibility under the Equality Act.

He said: “We would want to see government embracing that very, very strongly, to be able to get a seismic change in the landscape.

“Historically, the government have not seen it as their remit to enforce that area of the Equality Act, so it is left to disabled individuals or organisations like RNIB to do class actions.”

He said the legal requirement under the Equality Act is for websites of service-providers to achieve the “double A” level of accessibility, but 95 per cent of sites in the UK do not even meet the lower “single A” level, 20 years after protection was first introduced through the Disability Discrimination Act.

He also told the MPs that the government’s Access to Work scheme was only “scratching the surface” of what was needed in funding disabled people’s workplace adjustments.

And he said that AbilityNet and ClearTalents will be trialling the use of the ClearTalents diversity profile – which provides “tailored reasonable adjustments” for disabled people, as well as those who face recruitment barriers for other reasons, such as cultural factors, transgender status or caring responsibilities – in a number of jobcentres in London.

He said it was “really, really important” for employers to be “much more proactive” in the provision of reasonable adjustments.

And he said that organisations that use the ClearTalents system increase the “disclosure rate” of such barriers from about two to three per cent to between 60 and 65 per cent.

He has to use three separate devices, because none of the systems he uses will work in every situation.

He said: “It’s very task dependant. No one system exists that can help me in every situation.

“I have to spin my work out across three different devices and three different operating systems just to perhaps achieve the same task that someone with sight might use.

“If there was a more integrated approach I could use one system, maybe one device, and be far more productive.”