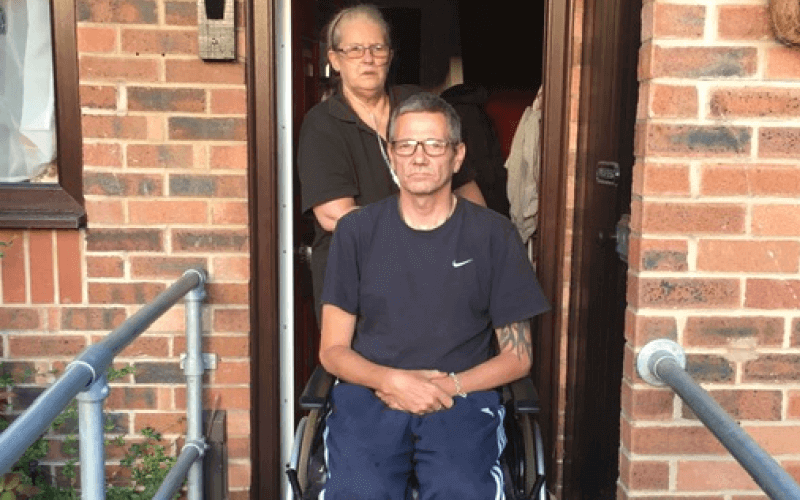 One of southern England’s largest housing associations has been ordered to apologise to a disabled man after it failed to investigate complaints that he had been subjected to a campaign of disability hate crime and harassment by other tenants.

Wheelchair-user John Vincent has been repeatedly targeted by a family on the estate in Grays, Essex, which is run by Southern Housing Group (SHG).

SHG was told how he had been bombarded with disablist abuse, and false accusations of being a paedophile – historically, a common factor in disability hate crimes – by the family and their friends, including two other residents on the estate, in a three-year ordeal.

Vincent is now terrified that he and his terminally-ill wife, Lorraine (pictured at their home), will die in an arson attack, after he was threatened with a fire in his letter-box. He now stays up all night to keep watch.

They have also had stones thrown at their two-bedroomed house, and rubbish thrown into their garden.

He had been trying unsuccessfully to persuade SHG to investigate his allegations for two years, but it was only when he reported his concerns last August to the police and his local Tory MP, Jackie Doyle-Price, that Southern Housing finally took some action.

Vincent told Disability News Service (DNS) that the hostility he has experienced, the lies being spread about him and the fear that he and his wife will be attacked and “burned alive in our beds” has caused him to have epileptic seizures for the first time and a suspected stroke.

He said: “I’m being targeted because they don’t like the fact that I can’t work and I claim benefits.

“I’m being called a paedophile and I get verbally and physically attacked when I leave my home.

“I’m a prisoner in my own home, and I live in fear of someone setting fire to the house at night.

“They are calling me ‘spastic’ because I’m in a wheelchair, they throw stones at my house and threaten me with violence.

“We are both disabled and in need of desperate help as we are in fear for our lives as they have told people that I’m a paedophile.

“I’ve had threats from total strangers and I can’t leave my property without someone calling me names and abusing me.”

But when he tried to persuade SHG to take action and to look into further concerns about the lack of access to a parking space and the behaviour of its staff, it failed to carry out a proper investigation and dismissed his concerns.

Now, in a highly-critical report, the Housing Ombudsman Service has concluded that Southern Housing is guilty of four counts of “service failure”, including in the way it responded to Vincent’s complaints of anti-social behaviour and parking problems, and the way it handled his complaints and concerns about staff behaviour.

The ombudsman has ordered the housing association to apologise to Vincent, pay him £400 in compensation, ensure he has access to a parking space, and devise an action plan to deal with the anti-social behaviour.

The report describes how police told SHG that Vincent said one of the family had been shouting at him every time she saw him, “calling him a ‘paedophile’, ‘nonce’ and ‘spastic’. Suspect also shouts at the victim ‘look here comes polio’.

“Suspect has also been throwing rubbish over the victim’s garden. Victim believes he is being targeted because he is disabled in a wheelchair due to a spinal injury and he has no use of one of his arms.”

The local council’s safeguarding team told the ombudsman that it had been present on at least one occasion when Vincent had contacted Southern Housing about the abuse, and had encouraged him to contact the police when the housing association failed to act.

The ombudsman concludes in its report that Southern Housing had produced “limited evidence” that it had investigated Vincent’s allegations, while there was no evidence it had followed up on information that there was a witness to the anti-social behaviour.

Chris Harris, executive director for customer services at Southern Housing Group, said in a statement: “We are in touch with Mr Vincent and have apologised to him about the way that his complaints were handled and to discuss with him the next steps.

“While we cannot discuss the personal circumstances of individual residents, we always welcome the scrutiny of the Housing Ombudsman and, as a responsible housing association, we think it is right that we should be held to account.

“We are reviewing the detail of the ombudsman’s findings, which raise a number of important points, and where appropriate, will be undertaking the necessary actions in consultation with residents.”

An Essex police spokesperson said: “We received four reports of disability-related hate crime from a victim in Grays between June and September 2019.

“The incidents were allegedly taking place in close proximity to his home and involved a person known to him.

“Officers from our Community Policing Team carried out thorough investigations into these incidents, including the voluntary interview of a local woman.

“No case is ever closed and officers can review further evidence if it becomes available.”

She added: “If you are the victim of hate crime, you can report it to Essex Police online or by calling 101. Always call 999 in an emergency.

“Alternatively, you can report anonymously to Crimestoppers, or speak to Stop Hate UK on their 24-hour helpline by calling 0800 138 1625.” 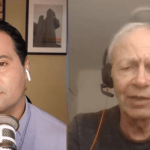 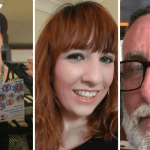 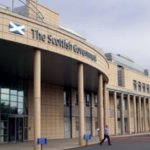