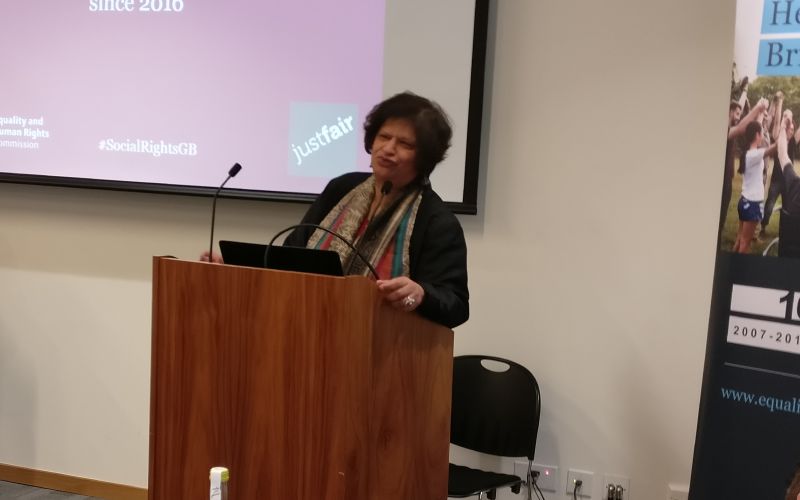 There is a “huge danger” that the government’s austerity policies are damaging the well-established social and economic rights of disabled people and other groups, according to the chair of a UN human rights committee.

Virginia Bras-Gomes, chair of the UN committee on economic, social and cultural rights (UNCESCR), said there was a “growing concern” among the committee that progress in realising those rights had “come to a standstill”, although not just in the UK.

She said her committee believed that developed countries like the UK have “not done enough” to further these rights, and there was also “a huge danger that the protection that has been achieved is now being lost” because of austerity policies and other cuts.

And she said that the failure to protect these rights was sending a worrying “political message” to developing countries, that “universal public policies to protect economic, cultural and social rights are not financially sustainable in the long run”.

The covenant includes rights to work, including safe and healthy working conditions, to social security and an adequate standard of living, to the highest attainable standard of physical and mental health, and to education and cultural life, and it was ratified by the UK in 1976.

Bras-Gomes told DNS that the government appeared to “know what the difficulties are” – including migration and an ageing population – but she said: “What I don’t see happening in many countries, including the UK, is that not everything is being done to use the resources the country has to deal with the difficulties.

“There is a growing defiance on the part of developed countries to say, ‘look at all the difficulties we face, we cannot go beyond what we have done already.’

“All over [including the UK] we see a major push towards making entitlement [to social security] conditions more stringent and lowering the level of benefits.”

She said that this “always hits the same people, always, everywhere. Why is it always the same who suffer [including disabled people, single parents and minority ethnic groups]?

“If it is for the public good, it should be different sectors of the population who suffer at different times… but if it is the same who suffer every time, then something doesn’t seem to be going right in this argument.”

She had earlier heard Dr Phillip Lee, a junior justice minister whose responsibilities include human rights, appear to suggest (see separate story) that the world was facing too many problems, such as mass migration and an ageing and growing population, for the government to be able to do more to protect economic, social and cultural rights.

Bras-Gomes told DNS that the UK was the fifth richest country in the world, and added: “The question I would like to ask the minister… is I acknowledge the difficulties, I acknowledge what you have done, but what I want to ask back from you is whether you are convinced you are doing all you possibly can to use the resources you have.

“[Are you] using all the resources you have to deal with these issues or do your priorities lie elsewhere?

“Most developed countries are not doing it, including the UK.”

The EHRC report concludes that the “overall picture” with the UK’s implementation of ICESCR “remains deeply concerning”, with “persistent challenges in relation to a number of economic and social rights and, in some instances, further deterioration”.

UNCESCR found numerous areas of significant concern when it last assessed the UK’s progress in 2016, but the EHRC report points out that the UK government has yet to explain the measures it will take to address the committee’s recommendations.

So far, the report says, the government has “failed to show why its tax, policy and legal reforms since 2010 were necessary and fair, and how they align with human rights standards”.

And it warns that reforms to the social security system since 2010 “may present the most significant threat to the implementation of socio-economic rights” in Britain.

The report adds: “Social security reforms made by successive UK Governments since 2010 have had a particularly disproportionate, cumulative impact on disabled people, resulting in a regression of their rights to independent living and to an adequate standard of living and social protection.”

Next week, EHRC is to publish the final report by two academics on their assessment of the cumulative impact of all the government’s tax, social security and minimum wage reforms since 2010, including on disabled people.

An interim report published last November showed that families with both a disabled adult and a disabled child would face an annual loss of £5,500 by 2021-22.

Ministers have repeatedly ridiculed the idea of carrying out such a cumulative impact assessment (CIA), ever since disabled campaigners began calling for such research about seven years ago.

This week’s report calls again on the UK government to carry out its own CIA, and to examine the factors behind the higher levels of poverty among groups such as children, disabled people, refugees and asylum-seekers, and develop a strategy to address them.

In 2016, UNCESCR called for a CIA of post-2010 policies and programmes on the economic, social and cultural rights of groups including disabled people, women and children.

Bras-Gomes said yesterday: “Surely the UK doesn’t lack the human expertise or the resources to do a CIA.”

Among the report’s other recommendations, it says the government should monitor the effects of its four-year benefits freeze.

And it calls on the government to implement the public sector socio-economic duty under the Equality Act 2010, which has never been brought into force and would impose a duty on certain public bodies to have “due regard” to reducing socio-economic disadvantage when making major decisions.

The report says the UK government should also assess how well its employment support programmes help disabled people find and stay in work, and commit to producing regular reports on its progress in reaching its manifesto target of seeing one million more disabled people in work by 2017.