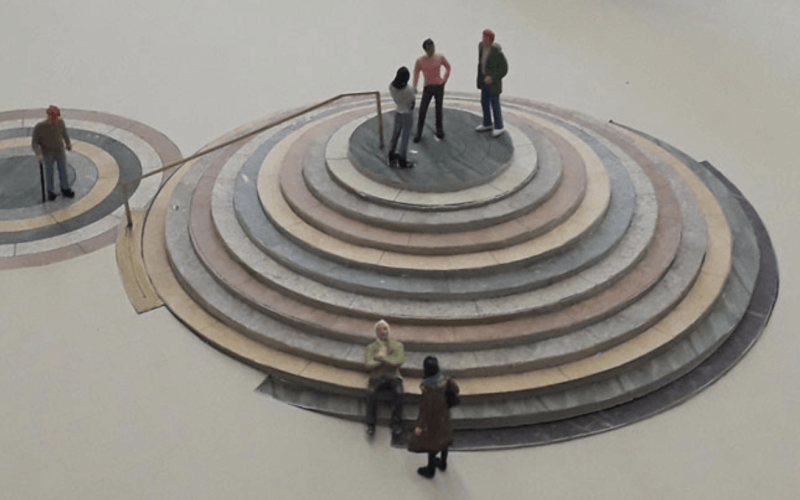 Disabled activists have criticised a council for pushing ahead with “discriminatory” plans for a memorial to victims of the Peterloo massacre – who died 200 years ago in the cause of equality – that will be completely inaccessible to many disabled people.

The new memorial is set to be unveiled on 16 August, the 200th anniversary of the attack by paramilitary and military forces on more than 60,000 peaceful, pro-democracy and anti-poverty protesters in Manchester, which led to 18 deaths and nearly 700 serious injuries.

The memorial (pictured) will be positioned near what was known in 1819 as St Peter’s Fields, the site of the massacre, and will be outside the current Manchester Central Convention Centre, which just a few weeks after the unveiling will host the Conservative party’s annual conference.

It has been designed by artist Jeremy Deller as a series of concentric circles, with members of the public encouraged to climb the steps to a flat top.

But the memorial, which has been funded by Manchester City Council, will be completely inaccessible to many disabled people, even though it has been designed to allow it to be used as a platform for speakers and demonstrators, mirroring those who spoke during the protest in 1819.

Now a string of disabled activists from Manchester have attacked the council’s refusal to ensure that the memorial is accessible.

In March, the designs were approved by Manchester City Council’s planning department, despite objections from GMCDP and others during the consultation and planning process and meetings with council leader Sir Richard Leese.

Hilton said: “Manchester has a reputation of pulling together and lining up shoulder to shoulder in defiance of injustice, ignorance and segregation.

“We are certain that once the campaign message is more widely heard the public will be as outraged as disabled people are and the council will be forced to listen and make the necessary changes.”

Mark Todd, a former city council access officer, who started a Facebook page to protest at the design of the memorial – and who calls it “a monument to discrimination” – said the group was “angry and shocked” that it was going ahead “despite it being inaccessible to disabled people and others who cannot climb steps”.

They believe this is “an act of exclusion that denies disabled people a voice, a blatant act of discrimination”, with the memorial “set to become a glaring metaphor for inequality and segregation with disabled people at the bottom of the memorial, literally being talked down to”.

The group has called for a “major reworking” of the memorial by Manchester City Council (MCC), to make it accessible to those unable to climb steps, with options “explored in a full, open, transparent and public manner”.

The group said that anything less would be a “breathtaking act of hypocrisy” and “an abandonment of the ideals of liberty and equality which moved those citizens to gather in St Peter’s Fields on 16th August 1819”.

Dennis Queen, from Manchester Disabled People Against Cuts, said: “We think MCC choosing to deliberately create a platform inaccessible for all speakers – or signers – sends a clear message against democracy for all in Manchester – the exact opposite of the aims of the memorial.”

Flick Harris, chair of Manchester Disabled People’s Access Group, said she and her colleagues were “shocked” that the council had approved the “newly designed inaccessible and unsafe Peterloo monument”.

She said: “Any new designs and projects should be accessible for everyone or no-one.”

Alan Holdsworth, a former Manchester resident who now lives in the US, where he is a member of the ADAPT grassroots disability rights organisation, said: “As a former Mancunian on behalf of ADAPT we are appalled that in 2019 we still have to fight against segregation and exclusion from the Peterloo massacre memorial.”

Holdsworth, who founded the Disabled People’s Direct Action Network (DAN) in the UK, said: “What makes us more angry is that although disabled people were part of the consultation process their voices, ideas and reservations were ignored.

“We call on the council to halt the process and include disabled people and accessibility in the design.”

Linda Burnip, co-founder of Disabled People Against Cuts (DPAC), said: “While DPAC realise that the new Peterloo memorial is to celebrate the martyrdom of 19th century activists it remains totally unacceptable in what is now the 21st century for any sector of our society – in this case disabled people – to be deliberately excluded from access to that memorial.

“We are appalled that disabled people’s concerns have been repeatedly ignored by Manchester City Council and call for an immediate redesign of this structure, together with disabled people, so that all citizens are able to access it equally.”

Although some changes have been made as a result of concerns about access, including the addition of a handrail, it appears that wheelchair-users will still only be able to reach the height of the lowest of the circles via a ramp.

But the council made it clear to DNS yesterday (Wednesday) that it was unlikely that any further major changes would now be made, stating: “We are happy to continue dialogue and explore whether anything further can be done to address concerns but it is unlikely there could be any fundamental changes.”

A council spokesperson said earlier: “We have engaged, and will continue to engage, with people who are disabled in order to make this memorial accessible while recognising that this is not a building or similar structure but a piece of public art.

“Significant changes to the original design were made in response to this dialogue throughout the design’s development including the incorporation of a ramp and handrail and the replacement of tiles covering the memorial with stone to reduce slip hazards.

“The specific design elements which provide information about Peterloo are all accessible.

“We have taken these considerations seriously. While we respect the fact that some people feel that these changes still do not go far enough, we believe we have done the best we realistically can allowing for the constraints of the site, and this is the only feasible site in the original Peter’s Fields area.

“Further mooted changes to the approved and already amended design would require new planning approvals and mean the project couldn’t be completed in time for the 200th anniversary commemorations.”

Deller, whose work often focuses on political and social themes, expressed sympathy with the position of disabled campaigners and told Disability News Service: “I take responsibility for not considering enough the needs of people in wheelchairs.”

He said further changes were suggested to improve access after the memorial secured planning permission, but he said the council had decided they were “so substantial it would have meant total redesign” and so were “not practical” because work had already begun.

He said he still hoped that “once the memorial is built there might be a way to adapt it for wheelchairs”, but he had not responded by noon today (Thursday) to the council’s position that it was probably too late for further major changes.

A spokesperson for the Peterloo Memorial Campaign, which campaigned for years for a memorial to be built, said disabled people were “right to be frustrated and angry about the lack of access to the monument”.

He said: “In addition to commemorating the massacre, the memorial has been designed as a platform for speakers and demonstrators, but people using wheelchairs or unable to climb steps cannot use it fully.”

He added: “We accept our share of responsibility for not immediately spotting this issue when the design was unveiled.

“We have worked with the council, the artist and disabled people involved in or supportive of the Peterloo Memorial Campaign to try and find a ‘retrofit’ solution.

“We are disappointed to be informed by the council that no solution is viable in the limited time left available.”

The names of those who died, and the villages and towns of the protesters, will be engraved on the memorial, while those visiting will be shown the direction of other parts of the world where significant protests have taken place, such as Tiananmen Square, Cairo’s Tahrir Square and Gdansk in Poland.

A smaller circle at ground-floor level will reproduce the information so that those who cannot climb the steps will be able to read it.