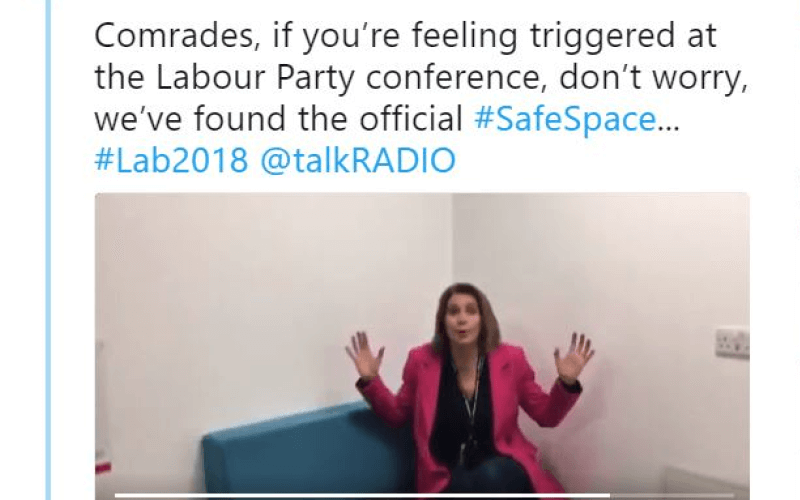 A disabled activist who was left “humiliated and violated” by the actions of a high-profile journalist who mocked a “safe space” used by disabled people at last week’s Labour conference has praised the decision to ban her from next year’s event.

TalkRADIO presenter Julia Hartley-Brewer has been told by the Labour party that she will not be welcome at next year’s party conference, following “multiple complaints” about her behaviour.

Hartley-Brewer posted a video on social media (pictured) in which she could be seen sitting in the safe space – which was put aside for disabled people and others who needed a quiet area for impairment-related and other reasons – and then saying “boo” as a colleague with a camera enters the room.

A sign on the door makes it clear that there is a serious purpose to the safe space, referring to “urgent medical treatment”, the party’s “safeguarding unit” and “safety or welfare” concerns, while information about the room was included in the accessibility information pages of the main conference guide.

Hartley-Brewer argued that the sign did not make it clear that the room was “meant for people with autism and other disabilities” and has refused to apologise.

This week she was still describing the room as “absurd”, even after being told repeatedly that it had been used by disabled people for impairment-related reasons, including by autistic people and those with anxiety.

She said: “I think it was quite clear she was going there with intent to cause distress and to paint herself as some kind of martyr when she got the inevitable backlash.

“She still hasn’t apologised, so she’s not sorry, so she doesn’t deserve to be at the conference.”

She said she was “still angry” about Hartley-Brewer’s actions.

She added: “What it showed me is just how ignorant people are around these issues, especially when it comes to mental health, and just how much work needs to be done to get it anywhere with a parity of esteem with physical disability.”

Rebecca, who is autistic, said she believed this ignorance could be linked to the social security reforms of successive Conservative-led governments and the “narrative they have spun” about disabled people, and the impact of that on disability hate crime.

She said: “I think she’s one of those people who doesn’t believe in mental health or anxiety. We’re just snowflakes [to her].

“It’s the ‘might is right’ attitude. She’s just a bully. You can guarantee that she was a bully in school. She’s just a deeply unpleasant individual.”

She added: “Someone said on Twitter, ‘If you can’t handle it, you shouldn’t go’. Do they want all autistic people to be shut up and locked away in an asylum somewhere?”

Rebecca said that discriminatory attitudes like this were “disgusting” and “sad”.

She said it was “really important” to explain why such spaces were necessary, and she said they probably should be staffed by accessibility stewards to avoid such actions at future events.

She said that having the quiet room at the conference had allowed her to continue to attend the event.

She said: “If I didn’t have that space I would have had a full-blown panic attack.”

Such an attack can lead her to “physically seize up”, experience pins and needles in her hands, and temporarily lose the ability to speak.

She said: “I’ve been picked up by ambulances [because of] the way I collapse.

“If I hadn’t had that space I would probably have collapsed and possibly been taken in an ambulance or I might have taken myself back to the hotel, but I might not have been safe.

“If I hadn’t had that space I think I would have been in real trouble that day.”

A Labour spokeswoman said: “We pride ourselves on high standards of inclusivity and we do not tolerate abuse or discrimination.

“We received multiple complaints about Julia Hartley-Brewer’s behaviour during conference, including from Disability Labour, and she caused considerable distress to vulnerable groups, including to delegates with conditions including Asperger’s, autism and anxiety disorders.

“We reserve the right to decide who we accredit for our events. Julia Hartley-Brewer had no right to use our conference facilities to mock disabled people, so she will not be welcome next year.”

Hartley-Brewer said on Twitter that the decision to ban a journalist for making what she said was a “joke” about Labour’s “absurd #SafeSpace” was “ridiculous and sinister”.

TalkRADIO refused to comment on the incident or on Labour’s ban but instead directed DNS to a tweet sent out by Hartley-Brewer last week.

In that tweet, she refused to apologise, although she said: “I’m told that this ‘safe space’ at Labour conference is meant for people with autism and other disabilities. The sign doesn’t say that.