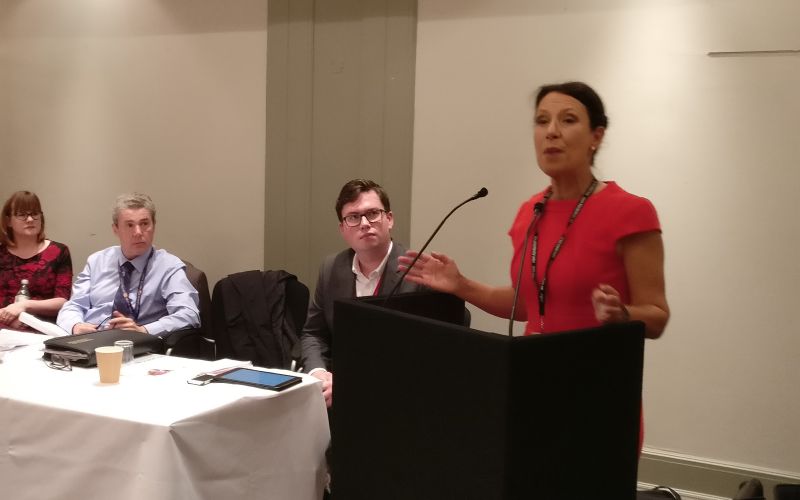 Labour’s shadow work and pensions secretary has pledged to transform the social security system from one that “demonises” benefit claimants to one that is “supportive and enabling”.

Debbie Abrahams told Labour’s annual conference in Brighton that the social security system was failing sick and disabled people, and she reminded her party that the UN’s committee on the rights of persons with disabilities had concluded last month that the government had caused a “human catastrophe” by cutting disabled people’s support.

Abrahams repeated the party’s pledge, included in this year’s general election manifesto, that a Labour government would legislate to implement the UN Convention on the Rights of Persons with Disabilities into UK law.

She later said that the party was also in the process of setting up a new social security commission, whose conclusions on how to reform the benefits system would feed into the party’s policy-making process.

Abrahams (pictured, right) told a fringe meeting hosted by the PCS union that Labour wanted to “transform social security” and “make it something people can value”.

She said Labour’s vision was “to make sure the social security system is there for every one of us”.

And she said that the government’s new Work and Health Programme was “just a way of making even more regressive cuts”.

Abrahams said the party had started some of the “groundwork” for setting up the new social security commission, and that “central” to it would be “ongoing dialogue” with disabled people’s grassroots groups such as Disabled People Against Cuts and Black Triangle.

She told another fringe event at the conference, organised by the Fabian Society and the disability charity Scope: “How will we achieve our target of halving the disability employment gap? It certainly isn’t going to happen through the Work and Health Programme, is it.”

She said Labour would be publishing its ideas before the autumn budget, and that the party needed to ensure that disabled people supported its proposals.

And she suggested that some policies could be piloted in Greater Manchester or London, where there were greater devolved powers for local government.

Abrahams also said that the party was carrying out a review of the Access to Work scheme, which was “absolutely inadequate at the moment”, and she added: “We are reviewing it with the intention of being able to expand it.”

After hearing how one disabled man at the fringe event had faced discrimination in the workplace, she said: “We need to get to the core of why we have such difficulties with employers. It is about cultural changes.

“We do need to ensure that we are shifting attitudes with employers.”

The event also heard from disabled presenter and producer, and YouTube star, Jessica Kellgren-Fozard, who said that “every single disabled person” she knew had had problems with the PIP assessment process, and all had found it “degrading”.

She said: “We need to be focusing on giving disabled people independence in more than just name, and that includes financial independence.”

Kellgren-Fozard also said that disabled women were twice as likely as non-disabled women to face domestic abuse, usually at the hands of their carers, but they were “tied” to them through the benefits system.

She said: “They can’t get away. You can’t get a second job and store some money up. You don’t have your own money anymore.”

She added: “Money is a massive part of independence. I am an adult and I want to be treated like that, I don’t want to be thought of as a child, a dependent, a problem, or a burden, ever.

“I think that is what we really need to be working for here, to give people independence in more than just name.”

Ellen Clifford, a member of the national steering group of Disabled People Against Cuts (DPAC), told the PCS fringe event that welfare reform had been introduced by New Labour under Tony Blair and the process had been “accelerated by the Tories”, and was designed “to reduce spending and cut the welfare bill”.

And she said: “We need to end the influence of private insurance companies who are there for their own profit-making reasons, and stop ploughing millions of pounds into helping them find ways to trick disabled people out of benefit entitlements.”

Catherine Hale, lead researcher on the Chronic Illness Inclusion Project, told the same fringe meeting that the government’s continuing benefits freeze was “one of the key drivers of increasing levels of poverty in the UK”.

She said that public support for the campaign to lift the pay cap on public sector workers meant it would be the ideal time to push for an end to the benefits freeze.

She said: “If we are really going to resist the Tory attempts to divide the workers from everybody else, would it not also be the right time to fight for an end to the benefits freeze, so we are showing equal value to workers as to people on benefits?”

And she urged politicians to consult with disabled people on reforming benefits assessments, rather than “doctors and so-called experts” who “really have no idea about the lived experience of disability and what are the real barriers to work that people with certain types of impairments face”.

She added: “You really need to draw on disabled people’s expertise on capability for work.”