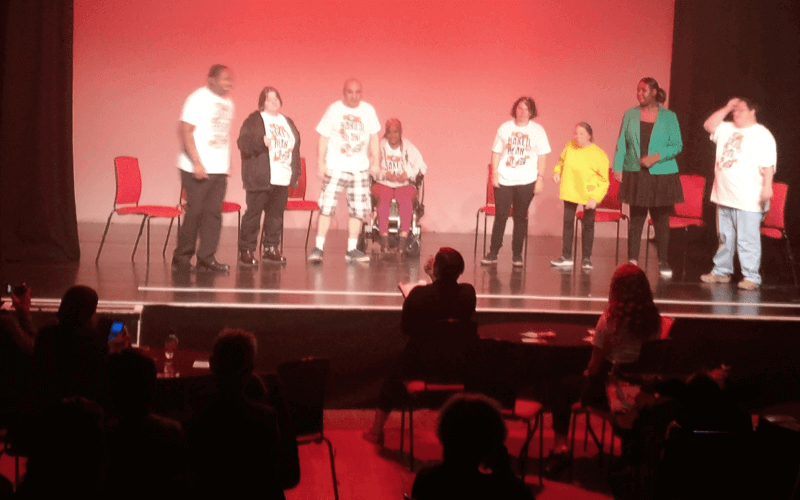 People with learning difficulties have ensured that Labour party members have heard their voices on the impact of austerity on their lives.

Many of those who spoke out at an event on the fringes of this week’s annual conference in Brighton were themselves Labour party members.

They were taking part in one of four events organised by Wimbledon Labour party, as part of an attempt – through its disability officer, Sue Hubbert – to ensure that the voices of people with learning difficulties were heard at this year’s conference.

The events were part of The World Transformed festival, which was taking place alongside the main conference.

They raised issues of cuts to benefits and to social care, closure of services, and the discrimination that people with learning difficulties face when trying to exercise their right to vote.

After the play, a series of people with learning difficulties spoke from the stage and the audience about their own fights against discrimination and austerity.

Kevin Sutton, a Labour supporter from Brighton, spoke of the barriers he faced in his life, such as in accessing education and transport, and his fears about the impact of Brexit.

He said: “I would like to see more good equality in this country, to help those in need, the homeless, people on benefits, those of us with disabilities and to provide a fair living wage for all.”

Rohan Lowe, a founder member of the Being Heard in Government group run by Brighton SpeakOut, and another Labour party member, spoke of his group’s campaigning work against cuts to council services.

He also described how austerity cuts had affected his work colleagues, meaning they often no longer had time to support him in his role.

And he said the vital software he needs to do his job stopped working several months ago and had yet to be fixed.

He said: “I have spoken to my IT department, my manager and even my union. Still no-one has even looked at it, which makes things difficult and which means most times I feel under-valued.

“I guess my point is that that working with people with learning difficulties might mean giving ongoing support.”

Ian, another SpeakOut member, compared the government’s austerity cuts to the game Jenga, because of how society can collapse when just one piece is taken away, such as cuts to day services, social care and employment.

He said: “The government need to hear what I have to say and get their act together by not cutting day services out, health out or any other brick. They need bricking themselves.”

Joe Jones, from Wimbledon, told the audience that he had been campaigning for the Labour party for the last 41 years, and still canvasses twice a week despite various health conditions.

He said: “I fully intend to continue canvassing until the day I die.”

Another audience member, Toby, said: “It’s very easy to put a label on something… it’s not so simple for people like us, but society likes to do that, they like to put labels on because it’s easier for them to comprehend but that can get in the way of realising all of the potential that all of these unique individuals have.”

He added: “I am autistic, and it’s a fricking gift.”