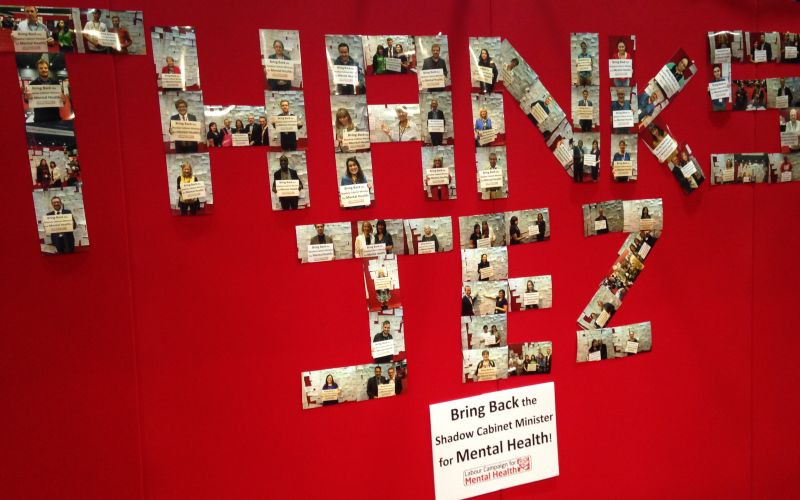 Disabled party activists have welcomed the Labour leader’s decision to back their campaign for him to reinstate the post of shadow cabinet minister for mental health.

Jeremy Corbyn was forced to scrap the post he created only last year in July because of the departure of MP Luciana Berger and the need to appoint a slimmed-down shadow cabinet, following a spate of other resignations.

But members of the Labour Party Campaign for Mental Health called at this week’s annual party conference in Liverpool for him to appoint a replacement to the role, following his re-election as party leader.

And they were delighted when Corbyn visited their campaign stand (pictured afterwards) and posed with a placard calling for the position to be renewed.

She said: “People don’t have protection at work and it’s very hard to fight for protection when you’re being stigmatised.

“You shouldn’t feel ashamed to have a mental health condition and that is how it is at the moment.”

She said she had not felt able to disclose her impairment to her first boss – a Labour MP – but had felt comfortable doing so with her current employer, another Labour MP.

She encouraged disabled people to disclose their impairments once they had secured employment because it provides them with more legal protection, but she said there was still a need for legal reforms to improve protection in the workplace.

Issues around mental health were widely debated and discussed at the conference, but mostly focusing on cuts to health services.

The party’s National Policy Forum has produced what it calls a “priority issue document” on mental health, which says the party is “firmly committed to making mental health a priority and ensuring that parity of esteem between mental and physical health becomes a reality”.

One delegate told the health and care debate at the conference about the disproportionate number of LGBT (lesbian, gay, bisexual and transgender) people with mental health issues.

He said: “We can’t sit back, comrades, and do nothing in the face of a mental health crisis, when the majority of transgendered young people either attempt or commit suicide.”

Another delegate stressed the impact of austerity and inequality on mental health and reducing life expectancy.

A third delegate thanked Corbyn for his “parity of esteem” pledge, and said she had received her first inpatient treatment earlier this year.

She won a standing ovation – including from Corbyn – after she disclosed her own experience of the NHS.

She said: “I can’t tell you how invaluable their work was. Without them, I don’t think I would be standing here today before you.

“I would like to ask [Tory health secretary] Jeremy Hunt: do you value nurses so little… do you value the lives of people like me so little that you’re willing to put their lives at risk?”

Shadow health secretary Diane Abbott told the conference: “Labour in government will put the money behind this.

“The delays in accessing timely mental health treatment around the country are unacceptable.

“We want an end to shame and an end to the tacit acceptance that the mentally-ill are somehow second-class citizens in our healthcare system.”