You are here: Home / Benefits and Poverty / Labour conference: Members call on party to ‘stop and scrap’ universal credit 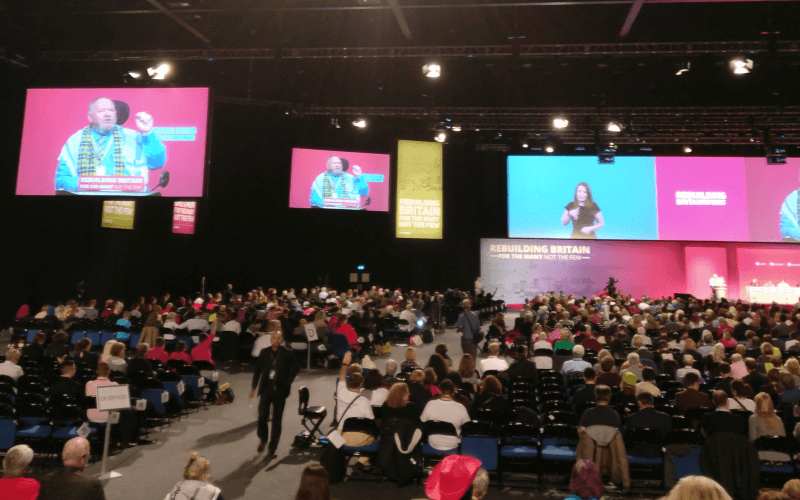 Disabled Labour members have used the annual conference to demand that their party calls on the government to scrap its “toxic” universal credit benefit system.

Labour’s position has been to call on the government to stop the rollout of universal credit – which merges six working-age benefits into one – and to “fix” it.

But disabled activists have pressured the party to promise instead that it will scrap universal credit completely if it comes to power.

In her main speech to the party’s annual conference in Liverpool, Margaret Greenwood, Labour’s shadow work and pensions secretary, promised a “complete change of direction” on social security and an end to the “hostile environment” created by the government.

She announced a lengthy review of social security policy that would lead to proposals for a new system based on “compassion and respect rather than distrust and stigma” and on the principles of “supporting people rather than policing them, and alleviating poverty rather than exacerbating it”.

But disabled party members and other delegates made it clear that the party’s position was not strong enough and that Labour needed to campaign to scrap universal credit completely.

Disabled town councillor Tyler Bennetts (pictured), from Liskeard, in Cornwall, said his town council had been worried about the imminent arrival of universal credit and so put money aside to help prepare for its arrival and train people to deal with its impact.

But he described how the local Tory MP – Sheryll Murray – had attempted to persuade the town council not to act and instead accused councillors of “meddling in things that were nothing to do with us”.

He told the conference: “I know people who have made the choice between eating and heating.

“Universal credit needs to be stopped dead in the water and scrapped. It needs to be thrown into the dustbin of history.”

Another disabled delegate, Kirsten Hearn, a councillor in Hornsey and Wood Green, in north London, said: “Fraudsters, liars, lazy parasites, scroungers, undeserving benefit cheats, workshy burdens on the taxpayer: negative attitudes to people who have to use benefits to make ends meet abound.”

She thanked the personal assistants who have supported her and other disabled people across the country “to live independent lives” and apologised to them that government policy meant they could not be paid as much as they deserved.

She added: “The desperation of constituents coming to my surgery who are in work but are low-paid workers and whose circumstances have changed is shocking.

“It’s terrible that I have to issue foodbank stamps to them and I think in this day and age and in the rather leafy constituency of Hornsey and Wood Green this is shocking, but it is shocking everywhere and we have not yet got universal credit, though it’s coming very soon.

“Let’s have a policy of making work pay and giving access to all, a fair benefit system which does not reduce the rights to benefits and [does not] put conditions on that are hard to meet.

Martha Foulds, from Sheffield, said she was “disappointed” that the “in-work poverty” motion being voted on – which called for a “fundamental overhaul” of universal credit and for an “immediate halt” to its roll-out – did not go far enough, and she called for universal credit to be “stopped and scrapped”.

She said: “Universal credit is unequivocally a disability rights issue and one that should not exist.

“A benefit that can only be claimed online is a disability rights issue.”

She said that half of people living in poverty were disabled themselves or living with a disabled person.

She said: “If you’re in poverty you’re less likely to have access to a computer, a smartphone, to the internet.”

And she said it was “deplorable” that universal credit would see an end to the premiums paid to disabled people with support needs.

Amy Allen, from Hertfordshire, who is autistic, said she wanted to “represent women on the spectrum” because “there are far more of us than you think”.

She told the conference that she wanted to express her “disgust” at years of government austerity.

She added: “There are many people out there who will understand what it is like to have to use a foodbank as you walk home with bags of heavy shopping that you have had to collect because you can’t afford to do a shop and you are hoping that your autistic child is going to actually eat the food that you’re bringing home, because that’s all there is.”

She said universal credit would be rolling out to her town later this year, and there would be many people who would not be ready and did not yet realise how seriously it would affect them.

James Colwell, from north-west Durham, called for an ethical social security system that could support people both in and out of work.

He welcomed the motion, which was later passed by delegates, but he said: “Universal credit doesn’t just need to be reformed, conference, but in my opinion it needs to be scrapped.

“We need to replace it with a radical, ethical alternative that is built from listening to claimants and advice agencies.”

Calls for universal credit to be scrapped continued at a fringe event the following day, hosted by the PCS union, which represents many Department for Work and Pensions (DWP) staff, and was attended by Greenwood and McDonnell.

Jane Aitchison, who told the event that she had worked for DWP for 26 years and had now been selected by Labour to fight the Yorkshire seat of Pudsey at the next general election, said that most of her colleagues now hated their jobs because of the cuts to disability benefits and the “hostile environment and the way we have to treat the customer”.

Aitchison, who was the first Labour politician to be backed by Disabled People Against Cuts when seeking to be selected to fight a parliamentary seat, said: “We don’t want to continue rolling out universal credit. It’s a toxic brand and causes untold pain and misery to people.

One member of Disability Labour, which represents disabled party members and is affiliated to Labour, had a blunt message for McDonnell.

She told him: “John, you said, ‘What do we do about universal credit?’ Scrap it.”