You are here: Home / Benefits and Poverty / Labour conference: Ovation for Justice for Jodey mum 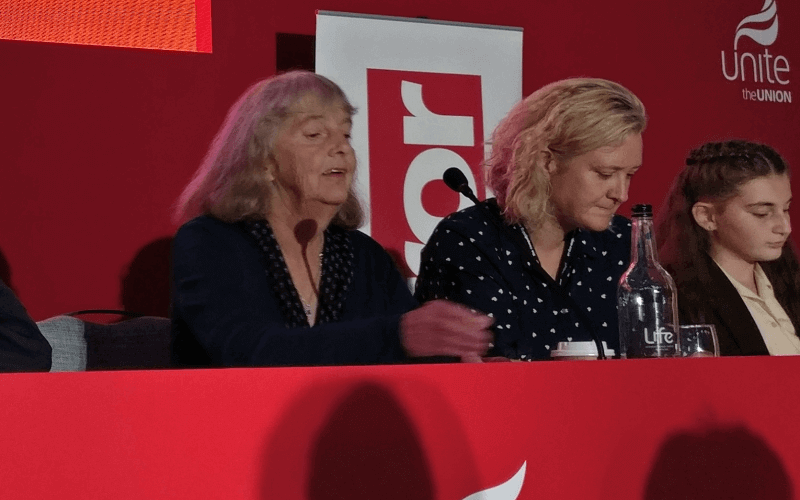 The mother of a disabled woman who took her own life after unfairly having her benefits stopped received a standing ovation at a packed fringe event at Labour’s annual conference, after she pledged to continue her fight for justice.

Joy Dove was speaking after a parliamentary petition in the name of her daughter – Jodey Whiting – secured more than 55,000 signatures by the time it closed this month.

The petition called for an independent inquiry into deaths linked to the actions of the Department for Work and Pensions (DWP), and for evidence of misconduct by ministers and civil servants to be passed to the police for a possible criminal investigation.

Dove told the Real Britain fringe event, hosted by the Daily Mirror and the union Unite, how her daughter had taken her own life just 15 days after her benefits were wrongly stopped for missing a work capability assessment.

DWP’s own Independent Case Examiner (ICE) later ruled that the department was guilty of five “significant” failings in handling her case, after finding that it repeatedly failed to follow its own safeguarding rules.

In an emotional speech, Dove (pictured, left) also held up pictures of her daughter, and the grave where she is buried, as well as a copy of her daughter’s post-mortem report.

She said: “What mother needs to see her daughter’s post-mortem report?”

Dove, who had travelled to Brighton from her home in the north-east to speak at the event, told how two senior DWP officials met with her to apologise for the department’s mistakes after the ICE ruling.

She said: “They went in and they found five failings. One failing is human error, but five failings is just unbelievable. They don’t know what they are doing.”

And she described how other families who have suffered as a result of the government’s social security reforms had contacted her through her Facebook campaign page to share their stories.

Party members at the fringe meeting gave Dove a lengthy standing ovation after she told them: “We have got to stop this and get Justice for Jodey and change the system completely.”

Kevin Maguire, the Mirror’s associate editor, who chaired the event, told her: “We know, we could hear, that that was not easy but it’s important that people like you speak up for people like Jodey and others.

“I just wish that David Cameron, when he says austerity didn’t go far enough, when he sits in his £25,000 shepherd’s hut, counting his £800,000 from his memoirs, could hear and understand what he’s doing because austerity has been evil and it has killed people.”

Labour MP Lisa Nandy told the event: “The story that Joy just told will stay with me for the rest of my life, and I hope it will stay with all of you, too.”

She added: “This was what they did to us in 2010. They deliberately picked on people that they thought were too ill, too powerless, too ground down by the system to fight back, so they picked on disabled people and they kicked them off PIP and they denied them the right to the benefits that they needed, thinking that these were the people that were least likely to be able to fight back.”

Unite general secretary Len McCluskey said: “We have a responsibility to make sure that Jodey is not forgotten.”

The Mirror’s Ros Wynne-Jones (right), who writes its Real Britain column, said Dove had had to take on the government “almost single-handedly” to fight for justice for her daughter.

She said she reminded her of other heroic families who had fought for justice for the victims of the Grenfell Tower fire and the Hillsborough disaster and other working-class families who had had to fight for “truth and justice” after avoidable tragedies under Tory governments.

She said that Jodey and Stephen Smith – who died in April, months after he was found fit for work by DWP despite weighing just six stone – were both victims of the austerity programme, a “hostile environment” that was created by Tory-led governments and which was “a political choice” and not a necessity.

She said: “What astounds me… is that families like Joy’s and communities like the ones I get to see up and down the country are still fighting back.”

The 55,000 signatures secured by the petition fell far short of the 100,000 needed to secure a debate in parliament.

After the fringe event, Dove told Disability News Service that she was still campaigning for ministers and civil servants to face criminal charges in court for the actions that led to Jodey’s death.

She said: “I am 65 years old. Would I think I would be travelling to Brighton to speak at a Labour party conference? No way. We will get justice.”

There has been disappointment and frustration among activists at the failure to secure 100,000 signatures for the petition, which would have triggered a parliamentary debate on the need for an inquiry.

Anita Bellows, a researcher for Disabled People Against Cuts, said: “It has been very upsetting to watch a petition, which should have very easily collected 100,000 signatures, achieve just over half this figure.

“Of course, there are many petitions, but this one was special, in the sense it would have brought some kind of closure to the families of claimants, driven to kill themselves because they lost their benefits, but it would also have exposed the cruel regime under which benefit claimants, some of them disabled, but all facing very adverse circumstances, have to live.

“It would have put the spotlight on the politicians overseeing this regime, and hopefully held them accountable for these avoidable deaths.

“We have been let down by politicians, trade unions/trade unionists, and activists for whom the usefulness of disabled people is to serve their own agenda.”