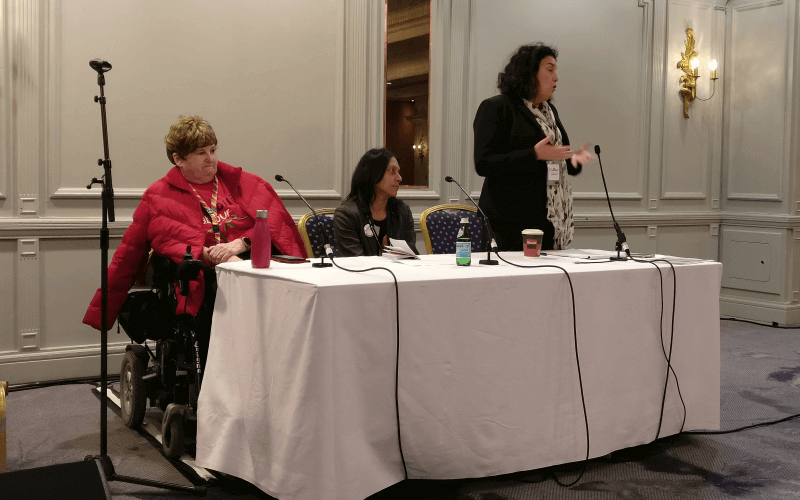 Senior Labour figures have been accused of discrimination and “oppression” of their own disabled members, after failing yet again to act on the barriers created by the party’s structures, policies and actions.

Some disabled party members are now set to protest outside the next meeting of the party’s national executive committee (NEC) over its failure to ensure equality for disabled people.

The Labour party has been repeatedly criticised by its disabled members for failing to provide them with the support they need.

Earlier last year, members of the Disability Equality ACT Labour (DEAL) campaign said the party had repeatedly failed to comply with its duties under the Equality Act.

And at the party’s annual conference in Brighton in 2017, the party faced pressure to put an end to years of “blatant discrimination” against its own disabled members.

The latest criticism was delivered in front of a key ally of Labour leader Jeremy Corbyn, Katy Clark (pictured, right), at a fringe meeting at this week’s annual conference organised by Disability Labour, which represents disabled party members.

Clark headed Labour’s controversial democracy review, which reported last year, although she said she had not been involved in its implementation.

She was at the fringe meeting to describe some of the measures recommended by the review to address barriers faced by disabled members, including equality training for all constituency and branch officers, an equality audit of party conferences, and more resources for equality training.

She told the meeting: “We need to hear the voice of disabled members within the Labour party.”

But disabled party members were scathing of the party’s efforts to address their long-standing concerns.

Richard Rieser, disability officer in Islington North, Corbyn’s constituency, and a prominent disabled campaigner and consultant on inclusive education and disability rights, said there had been no “clear steer” from the party’s national executive on implementing the democracy review.

He said: “I would suggest that Disability Labour organise some lobbies of disabled members of the next few NEC meetings until they take us seriously.”

Fran Springfield, co-chair of Disability Labour, told him: “Yes, that is something we will be doing and we look forward to you joining us.”

Clark said the next meeting of the NEC was on 23 November.

Rieser said: “In the world of work, all of these adjustments were made 20 years ago.

“Here we have the Labour party, claiming to stand for equality, failing to make the adjustments that it needs to be making.

“I am surprised that no member has yet taken the party to court because it is breaking the law all the time and it is just not acceptable.

“The leadership have to understand that this is not a nice little charitable move they are making to us. We reject charity. We want equality.

“And then they have the cheek to say the Labour party supports the social model of disability.

“Perhaps they need equality training to understand what that means. Disability is an oppression and if you are part of the problem, you are an oppressor.

“Unfortunately, most of the leadership of our party are oppressing disabled people and that is not acceptable and really needs to be tackled.

He added: “If this was the situation with BAME [black, Asian and minority ethnic] members, there would be an outcry, quite rightly, but we go on tolerating it because we have tolerated it all of our lives, but we mustn’t tolerate it any more, it has to stop.

Cllr Michelle Sweeney, a disabled member of St Helens council and a former probation officer, said she had been left “absolutely appalled” by her experience of equality within the Labour party as a new councillor.

She said: “As a disabled woman, every day you face barriers. And when you come into a party and the barriers are even more challenging, you feel often that you’re fighting from within.

“It is really, really frustrating, when I think of disabled people and what they have to struggle with; we will lose them because they will think, ‘what is the point if I don’t feel I have got access into these spaces?’”

She added: “I have been saddened by just how poor things are in this conference. The accessibility is just not great at all. It’s pretty frustrating to say the least.”

Clark said she had been told the next five Labour party annual conferences would be held in Liverpool, which was more accessible than Brighton although it “also has its problems”.

She said Brighton conferences always result in the party being “inundated with complaints about access issues”.

Christine Tongue, the disability officer for South Thanet constituency Labour party, said: “We can’t even get into buildings that are accessible.”

She said one disabled member fell from his wheelchair on the way out of a party meeting in South Thanet because “the ramp was rubbish”.

She added: “We don’t have funds to build accessible buildings and we don’t have access in the constituency.”

She said there was a need for funding to invest in ensuring the accessibility of buildings owned by the party.

She added: “If they can’t get into meetings, they are definitely not going to stand for council.”

The Labour party had failed to comment on the concerns raised by noon today (Thursday).