You are here: Home / Benefits and Poverty / Labour conference: Reynolds pledges to work with disabled people to replace WCA 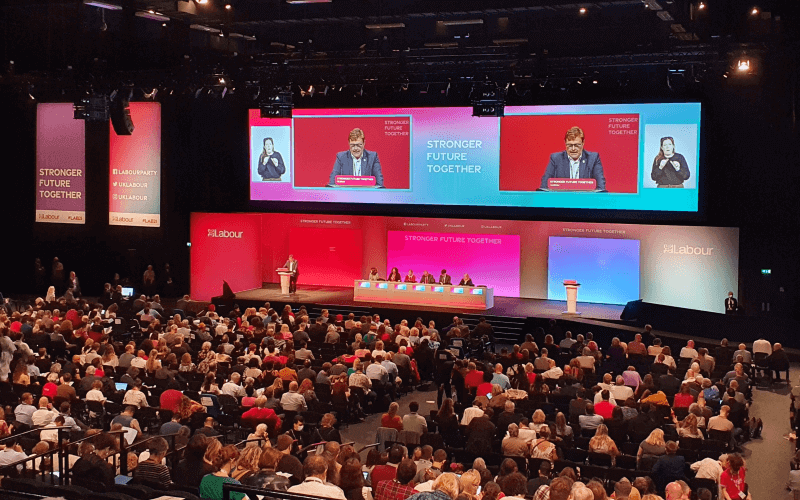 Labour’s shadow work and pensions secretary has pledged to work alongside disabled people to draw up plans to replace the “fitness for work” benefit assessment system that has been linked to the deaths of multiple claimants over the last decade.

Jonathan Reynolds told this week’s annual conference in Brighton that Labour would put “co-production at the heart” of the plans to replace the work capability assessment (WCA) system.

He also spoke of the “fear” experienced by claimants when they receive a letter from the Department for Work and Pensions (DWP).

He said: “When people receive a letter from the NHS, they don’t fear it. The same cannot be said of the DWP. We are going to change that.

“We will replace the current system of WCAs with a system that supports people to live the lives they want, not one that tries to catch people out to take away their support.

“Assessments focused on what people need to succeed, rather than one that treats them with suspicion.”

The WCA system was introduced under the last Labour government, in 2008, but the fatal flaws in the process, its links with the deaths of claimants, and ministers’ repeated refusal to fix those flaws – and even to cover up the links with deaths – have emerged only over the last 10 years under successive Conservative-led governments.

Reynolds also spoke of his son being diagnosed with autism and learning difficulties.

He said: “That’s never going to be easy. But what makes it worse is knowing a lot of government policy causes you to worry more, not less.”

He also repeated Labour’s pledge to “replace universal credit with a better system”, although he provided no details on what that would look like, other than changes to the earnings taper rate, which is currently 63 per cent*, although as high as 75 per cent once tax and national insurance are included.

He said that claimants on the lowest incomes “effectively pay a higher marginal rate of tax than their prime minister because of that taper rate”, and that a Labour government would change that taper rate and “make sure people keep more of the money they earn”.

Reynolds also attacked the government’s decision to end the temporary £20-a-week “uplift” that was handed to universal credit claimants at the start of the pandemic.

The uplift starts to be phased out this week.

Reynolds said it was the “biggest cut to the welfare state ever” and would be an “unmitigated disaster”.

Reynolds was speaking as activists from Disabled People Against Cuts (DPAC) held a week-long action to protest at the end of the uplift.

The #AudioRiot actions have also been protesting at the government’s failure to extend the uplift to claimants on legacy benefits, such as employment and support allowance, which is being fought through the courts, with the high court now due to hear the case in November.

Activists also protested outside the offices of Chloe Smith, the new minister for disabled people, in Norwich this week, and handed in an open letter of demands on disability rights.

As part of the London action, activists occupied part of the station, and carried a “Tory Cuts Kill” DPAC banner through the King’s Cross terminal, before blocking Euston Road, causing it to be closed in both directions.

DPAC is due to protest again from 5.30pm today (Thursday) about the universal credit uplift – and also “to demand a fundamental overhaul of the social security system” – both on Twitter and outside Downing Street, alongside unions, other campaign groups and a representative of the Green party.

The continuing protests come as the government today launched a new £500 million Household Support Fund, which it claims “will support millions of households in England”, and will be distributed by councils in England, and is aimed at helping “vulnerable households” with “essentials” as the country “continues its recovery from the pandemic”.

The government did not link the new fund with the end of the universal credit uplift in its announcement.

*The DWP website says: “This means that for every £1 you earn over your work allowance (if you are eligible for one) your Universal Credit will be reduced by 63p.”

Picture: Delegates at this week’s Labour conference in Brighton