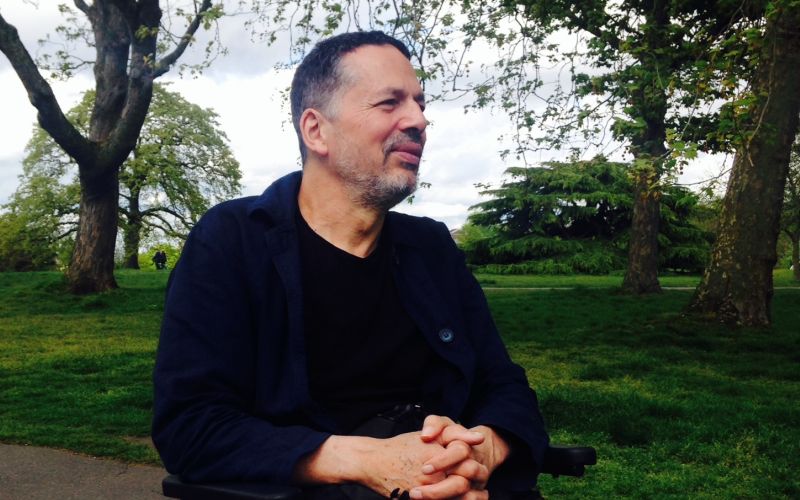 A company that runs a leisure club on a luxury housing estate discriminated against a disabled man by repeatedly refusing to make the adjustments that would allow him to use the swimming pool, according to a court’s “landmark” judgement.

James Plummer (pictured) has secured the legal judgement after an “epic struggle” that has lasted nearly seven years.

The main reason he and his wife moved to a flat on the Royal Herbert Pavilions estate was that it would allow him to use its leisure club, which included a heated pool.

Swimming is the only type of physical activity he can enjoy, because of his multiple sclerosis.

From August 2011, the Plummers sent repeated emails asking for adaptations that would make access to the pool easier and safer for him, but they were all rejected.

The management company that runs the estate and owns the leisure club – Royal Herbert Freehold (RHF) – told them that it only carried out improvements that would benefit all residents.

RHF even sent a survey to all residents of Royal Herbert Pavilions asking for their opinion on Plummer’s requests for adaptations.

Central London County Court concluded that this survey was “humiliating”, “reinforced existing prejudices” and “should never have been circulated”.

It said this was just one of a series of “humiliating and demeaning” obstacles and hurdles that were placed in Plummer’s path by RHF.

In 2014, Plummer submitted costings for work to make the leisure club more accessible to him, following an audit which found that it would cost only about £5,000 plus VAT.

That same month, Greenwich council agreed to refund the club £78,000 in overpaid business rates, but Royal Herbert still refused to carry out the work.

The court said there needed to be a “sea change in attitude” towards disabled people by Royal Herbert and found that it had subjected Plummer to indirect discrimination.

The court found that the management company was acting as a service provider, and not as a landlord, and so had an “anticipatory duty” under the Equality Act to consider adjustments for disabled people.

It found that RHF had breached that duty to make reasonable adjustments and had been discriminatory in the works it carried out.

The court awarded Mr Plummer £9,000 in damages for injury to feelings, which is believed to be the highest award for such a claim.

A landlord would have had no such duty to make reasonable adjustments, although the government finally agreed in March that it would bring into force long-awaited laws – under the Equality Act – that will impose a duty on landlords to allow disabled tenants to make access improvements to the common areas of residential properties.

Plummer said: “From the beginning I could see that RHP were unwilling to help, as they seemed to regard my needs as a distraction.

“This epic struggle has worn me out over the last five years. My health has declined and paying for a facility I cannot use has been upsetting.”

Leigh Day, the legal firm that represented Plummer, said the case could help other disabled people in accommodation with leisure facilities that are managed by a management company or housing association.

Nick Day, from Leigh Day, said: “This is an incredibly powerful moral and legal victory for Mr Plummer, and vindication for the claim he pursued.

“All Mr Plummer wanted to do was use a swimming pool, not only for the simple enjoyment of swimming, but because it was the only physical activity he could do.

“Mr Plummer just wanted a level playing-field, and this was denied him for years.

“This denial not only isolated him, and caused him to have to go through protracted and complex legal proceedings, but also had a significant impact on his well-being.”

He said the judgment “should now be a warning to all management companies and housing associations operating a leisure facility in a similar manner that they must make the reasonable adjustments for the benefits of a disabled resident”.

A spokesperson for the Equality and Human Rights Commission, which helped fund Plummer’s case, said: “The Equality and Human Rights Commission supported this case as it highlighted a gap in the law around reasonable adjustments and it wanted to ensure management companies are aware of their responsibilities to help disabled people overcome barriers.

“The commission is considering follow-up action with RHF Ltd.”

An RHF spokesman declined to comment because he said the judgement was “still in discussion with the board”.