You are here: Home / Arts, Culture and Sport / Language, love and research feature in 11th Blogging Against Disablism Day

Disabled people have taken part in the 11th annual Blogging Against Disablism Day, sharing their “experiences observations and thoughts about disability discrimination”.

Across 18 different areas, ranging from education to art and science, some bloggers shared their own stories of prejudice, while others analysed society’s disablist attitudes.

Holly Matthes, a Liberal Democrat activist who has both worked in and used mental health services, blogged about a recent article by fellow party member Henry Foulds, who is blind, in which he described how he was told by a senior party activist “that I should crop my cane from campaign photos or somehow hide it”.

Matthes argues in her blog that this incident may seem insignificant compared to the government’s cuts to disabled people’s benefits and services, but that “both big and small injustices are based on the same problems at the core of our thinking, and we call those problems disablism”.

From The Edge Of The Map’s blog on the social model of disability looks at the idea that disability can be erased by removing the “physical and bureaucratic barriers that are woven into the structure of society”, and suggests: “At its core, the Social Model of Disability requires us to confront and dismantle the shame that society imposes on any Disabled Identity.”

Disablism and dating is the subject of the blog posted on The Eternal Pursuit Of Love And Laughter, which describes the negative impact on the author’s dating life after her chronic health conditions “started to become more visible”.

She concludes: “So I’m going to get a dog for company. We will go to the beach for ice-cream, take day-trips and sit in the sun in the park.

In her blog, A Writer In A Wheelchair discusses the everyday incidents of disablism that she brushes aside because “they’re just my normal”.

Mel Baggs discusses how the “state of autism research is pretty uniformly terrible”, in a blog entitled Don’t Ever Assume Autism Researchers Know What They’re Doing.

She says that having autism makes her “able to see through the holes in autism research so well that I have been sought out by researchers to critique their own research ideas and suggest better avenues for research and techniques to use”.

Robin’s Blog was another to focus on the world of academia, this time focusing on some of the access issues he has faced as a wheelchair-using academic.

In I’m An Academic In A Wheelchair – Why Is It So Difficult?, he describes the “in-built assumption that I can’t be a staff member, I can’t know what I’m doing, and I must be a ‘helpless person’”, and describes a string of examples where he has faced discrimination.

He writes: “The combination of these examples – and many more that I can’t think of right now – is that I often feel like a second-class citizen, in academia, on campus, when travelling and so on.

“This isn’t right – but the silly thing is that it doesn’t take that much effort to change. Many of the examples given above could have been changed without much effort or much expenditure.”

Another blog focusing on academia comes from Dr Sarah Campbell, who says that nearly 20 years after the disablism she experienced as a maths undergraduate, “disablist practises such as grades being given for attendance, or no allowances being given for deadlines, are still common”.

She writes: “It is also clear that universities are still set up for the traditional way of learning and simply cannot cope when a student needs to be different.

“Yet it is ok to be different. I even went on to do a PhD and became a maths researcher! I am proof positive that what is important is ‘what’ you learn, not ‘how’ you learn it.”

D H Kelly, the disabled activist behind Blogging Against Disablism Day, writes on Diary Of A Goldfish (pictured) about the language of disability, and how “in the struggle against increasingly negative government rhetoric, the term ‘genuinely disabled’ entered the vocabulary of disabled activists themselves”.

Kelly’s blog concludes that disabled people should “actively resist a culture which suggests we can gain acceptance by constantly explaining ourselves and our conditions”. 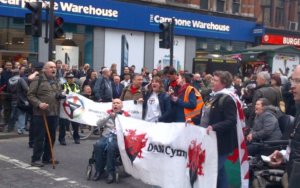 Setback for disabled people’s union, but activists insist ‘it’s an idea whose time has come’ 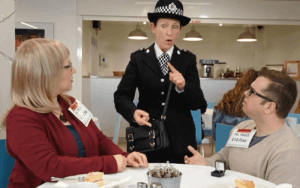