You are here: Home / Arts, Culture and Sport / Letter to BBC tells of ‘outpouring of hurt and distress’ over benefit fraud drama 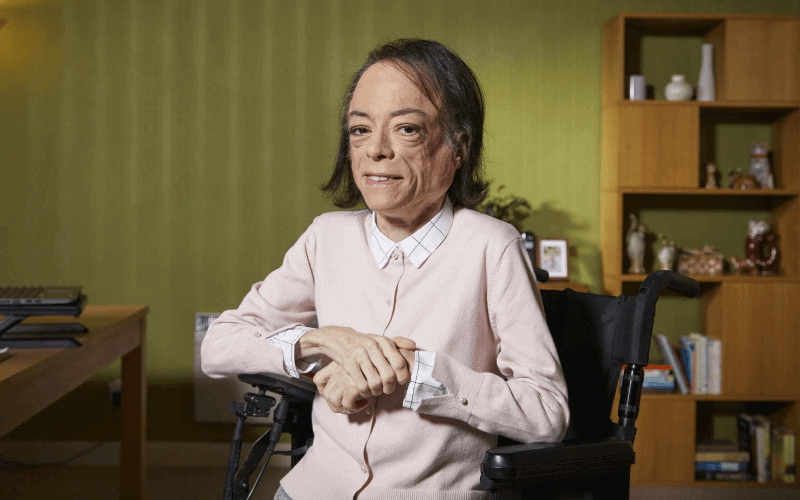 Campaigners have written to the BBC to express the “outpouring of hurt and distress” felt by disabled people over its decision to broadcast a disabled-led drama that mirrored years of deeply damaging government rhetoric about benefit cheats.

The Real Deal (pictured) was broadcast on BBC Four earlier this month as part of the CripTales series of monologues.

It starred disabled actor Liz Carr, was written by a disabled playwright, Tom Wentworth, and had a disabled director, Ewan Marshall, while another leading disabled actor, Mat Fraser, was “curator” of the series.

Carr’s character is seen spying on a neighbour she suspects of benefit fraud, before being persuaded by the neighbour to exaggerate her own impairment for her own personal independence payment (PIP) assessment, and then eventually informing the Department for Work and Pensions.

But its broadcast led to a wave of anger and frustration from horrified disabled activists, many of whom have spent years highlighting and fighting against the efforts of Tory ministers to paint disabled people as benefit frauds, fakers and scroungers.

Now a letter, backed by at least eight disabled-led campaigning organisations, and allies, has told the BBC how the drama has been described as “horrifying”, “sickening” and “terrifying”.

The letter particularly focuses on the damage caused to members of the chronic illness community, and it was drafted by the Chronic Illness Inclusion Project (CIIP).

It says the drama has left people with invisible and fluctuating impairments “extremely distressed at how they are represented in the media and more fearful than ever of being targets of harassment or fraud reporting”.

Disabled people’s organisations and grassroots groups who have signed the letter include Shaping Our Lives, Disabled People Against Cuts (DPAC), Recovery in the Bin, and the National Survivor User Network.

They welcome the BBC’s decision to commission the CripTales series, and highlight the “excellent work and long-standing activism” of those involved, particularly Liz Carr.

But although the letter praises the way the drama exposes the “farcical nature of PIP assessments”, it says its treatment of the neighbour, Nigel, was “terribly ill-judged” and appeared to “conflate invisible disability with benefit fraud”.

The letter says: “This depiction has been deeply wounding, not only to people with chronic illness, but those living with mental distress and other forms of hidden impairment.”

It adds: “Much of Nigel’s supposedly suspicious behaviour is in fact common for people with chronic illness or other hidden impairments.

“Many have fluctuating conditions, with both good and bad days. They might be able to go out one morning and appear ‘fine’, but then later be struggling with so much pain and fatigue that they are unable even to move around their home.”

Responses to the drama from those with chronic illness included: “Nothing undid the ideas from the beginning that going out everyday or carrying your mobility aid (or shock maybe not even having one) is indicative of lying about ability.”

CIIP points in the letter to its own research, published earlier this year (PDF), which found that many people with energy limiting chronic illness experience significant fear and hostility over the threat of being placed under surveillance and being accused of faking their impairment.

Fraser has previously defended the drama, arguing that it was supposed to be a “satire” and that it showed how “an able bodied fraudster can scam the system easily, but a woman with genuine impairments is only able to get the support she needs, by being forced to play up to an ignorant and clumsy view of what a disabled person should be”.

But the letter says that “instead of satirising the trope of disabled fakery, by failing to present alternative explanations for Nigel’s behaviour, people with chronic illness feel that this episode merely reproduces ignorance and prejudice and reinforces oppressive stereotypes”.

Those signing the letter say it is not intended as “a personal attack on those involved in its making, nor to divide different groups of disabled people” but as “a plea for mutual understanding, in the furthering of unity and solidarity among disabled people as a community”.

They also call in the letter for dialogue with the production team behind CripTales, and for the BBC in future programmes to ensure “inclusion and representation of all impairment types, including energy limiting chronic illness and mental distress”.

The BBC said it had received the letter and was preparing a response.

It said that CripTales was “part of a wider focus on disability across the BBC to mark the anniversary of the Disability Discrimination Act and the BBC is committed to improving representation of – and opportunities for – disabled people on and off air”.