You are here: Home / Longcare Survivors: The Biography of a Care Scandal
Listen 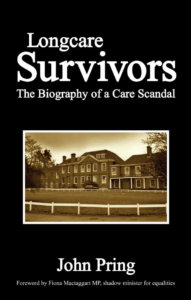 Longcare Survivors: The Biography of a Care Scandal is John Pring’s book investigating the horrific abuse of adults with learning difficulties that took place at two residential homes in south Buckinghamshire.

In the autumn of 1994, a leaked council report revealed that scores of people with learning difficulties had been beaten, neglected, drugged and raped at the homes in Buckinghamshire.

Now, 17 years on, the reporter who helped expose the scandal can, for the first time, tell the full, terrible truth about what happened at the Longcare homes.

Using previously unpublished documents and testimony from survivors of the regime, and other key witness accounts, Pring pieces together a detailed account of the horrific abuse that took place at the homes, and the disturbing background of Gordon Rowe, the former social worker who ran the Longcare homes. Pring also explains why the abuse was able to continue for more than a decade before it was finally exposed.

Crucially, he delves into the roots of the scandal, uncovering the history of the institutionalisation of people with learning difficulties, including the rise of the eugenicists in the late nineteenth century, and of the huge long-stay hospitals that came to dominate the care environment for much of the twentieth century.

Just as importantly, Pring tracks the appalling long-term impact of the abusive Longcare regime on its former residents, something he believes has never been done before in this way over such a long period.

He also investigates the ingrained discrimination in society – and in our care and justice systems – that today is still exposing people with learning difficulties to shocking levels of injustice, hostility and violent crime.

Pring concludes in the book that, despite the improvements in the care and criminal justice systems over the 17 years since he began investigating the Longcare story, all too little has changed.

Longcare Survivors is the story of one journalist’s 17-year journey into the disturbing heart of our care system. It is the follow-up to Pring’s first book on the Longcare scandal, Silent Victims, which was published in 2003 by Gibson Square Books and is now out of print.

Longcare Survivors was published on 3 June 2011, with a foreword by shadow equalities minister Fiona Mactaggart MP. It is priced £12.50 (plus £3.25 postage and packing).

To order a copy, please click on the following PayPal button:

‘A kind of justice will be done if this book finds its way onto the reading list for every health and social care course, in every class, college and university.’ – Debbe Caulfield, Disability Arts Online

‘Everyone – ministers, policy-makers, police officers, social workers, parents and those in the ‘care’ profession – should read this and learn from it.’ (5/5) – Katharine Quarmby, Amazon.co.uk

‘This is a must read for anyone working in social care. Harrowing and heartfelt, this is a no-holds-barred shocking biography of real people and their horrific stories… Although not an easy read, John Pring tells a compelling narrative of how the system can completely let people down.’ (5/5) – Chrissie, Amazon.co.uk

‘An in depth and tragic examination not only of the abusive systems of care management at Longcare – and the systems that failed to notice or to safeguard the care recipients – but also at the ongoing recurrence of institutionalisation and abuse of people with learning difficulties. Well-researched and written by the excellent John Pring of Disability News Service.’ (5/5) – Doug Paulley, Amazon.co.uk

‘As a reporter in April 1997, I waited at Reading Crown Court for the verdict on three of the Longcare staff who abused adults with learning difficulties in their care. This book’s author, and then reporter for the ‘rival’ local newspaper, John Pring, was also waiting. I never found the nerve to talk to him – I hadn’t covered the trial – and I had to leave before the (mostly guilty) verdicts were announced, too late for our press deadline.

‘Having read Longcare Survivors:The Biography of a Care Scandal, decades later, I find myself amazed and ashamed when I remember my thoughts at the time. ‘This wasn’t such a big story; readers wouldn’t understand it.’ And, worst of all, ‘The victims wouldn’t have understood what was being done to them.’ I was a compassionate, thoughtful young journalist but I wasn’t outraged and questioning about this tragedy, because the ‘victims’ were people with learning disabilities.

‘So I’m grateful that John did his job, got the story, followed the leads and wrote this book. It is excellent, journalistic writing; thoroughly researched and well-structured. What could be an impossibly bleak read is split into chapters that weave history, with narrative and sensitive interviews.

‘His careful history of how people with learning difficulties have been perceived, hidden, ‘dealt with’, feared, hated and supported in the UK for hundreds of years, is by turns enlightening and shocking, and provides a vital context for how Longcare (and every abuse case before and after) came to happen.

‘The Amazon product description captures the complexities of what happened; former-social worker turned care-home owner Gordon Rowe wasn’t the evil villain with a few henchmen, who was finally defeated. To quote the book: ‘Longcare residents had been let down by not a single agency, but by every organisation which had ever come into contact with them.’

‘On a hot day this summer I watched a group of older children with learning difficulties enjoying a visit to my local lido, with a team of teachers and support workers. It was a joy to see; the genuine shrieks of excitement and the sense of adventure.

‘I watched as one teenage boy, who had greater needs, was encouraged to get into the water by two support workers. He really wanted to get in but was very wary and it took ten minutes of patient communication before he braved it, and went down the steps into the pool, triumphantly punching his fists in the air. I went over and said well done, and the teacher said the boy’s mum would be very, very proud.

‘That boy is likely to grow up needing and deserving society’s help to live a life as independent and fulfilled as possible. It is horrific to imagine him becoming a resident at another Longcare.

‘John’s book has helped me realise the persistent threat of this, despite the very gradual improvements that have been made in some places: it should be read by everyone who has responsibility for making decisions about the care of adults with learning disabilities – from care staff, to social workers, to councillors, to police officers.’ – Rebecca Thomas, Amazon.co.uk

‘Longcare Survivors is a testament to the dedication and tenacity of the author – journalist John Pring – who has spent 17 years investigating the case. It also stands as a testament to the courage and forbearance of the survivors themselves, whose voices feature prominently in this brilliant book.

‘Their abuser, Gordon Rowe, a former mental health nurse turned charismatic conman, was able to establish three residential care homes, where for years he was able to rape, beat and sadistically humiliate countless people with learning disabilities with impunity.

‘As with the recent Winterbourne View case (a residential ‘care’ home in Bristol) the abuse only came to light thanks to the actions of a whistleblower. In the case of Longcare an anonymous person leaked a report by Buckinghamshire County Council to the Slough Observer.

‘One of the most inspiring and important aspects of this book is the way the author challenges the perception of people with learning disabilities as passive victims. He reminds us that “in many and varied ways, they resisted [Gordon Rowe’s] cruelty, they found ways to survive”.

Nevertheless, the effects of abuse can be long-lasting and, as Jim Mansell wrote in The Guardian in the wake of Winterbourne View, for people with learning disabilities “there is no quick fix”. For many of the Longcare survivors, the memories and effects of abuse remain raw, present and close to the surface.

‘But we can at least take some comfort from Dorothy Thomson, the true heroine of this story. “As soon as you get in an institution, you learn to hate and you have a dream to hold onto and my dream was that one day I would have a flat of my own and I would never marry a body-abled man. That dream has come true, because that is the main thing you have to hang onto to get through these traumas.”‘