You are here: Home / Benefits and Poverty / Loss of woman’s Motability car ‘shows how vicious PIP reforms are’ 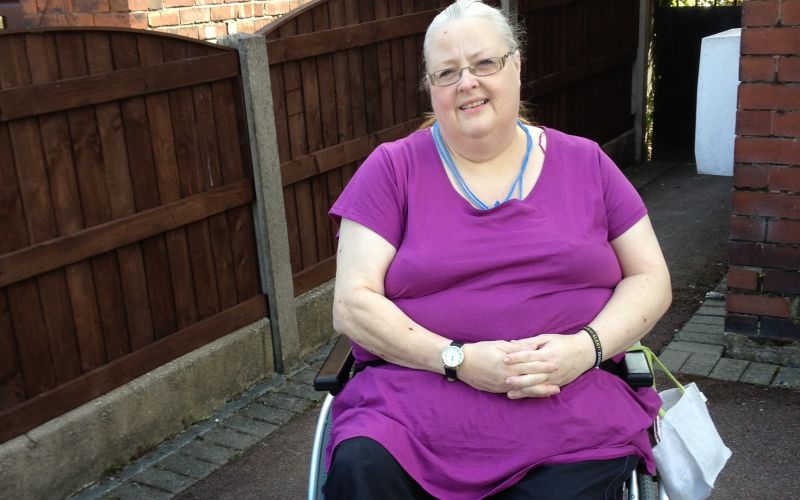 A disabled woman has lost the car she relied on to attend vital hospital appointments after the government decided she no longer needed higher level mobility support without bothering to carry out a face-to-face assessment of her needs.

Jo Jones (pictured), from Stockport, had her Motability vehicle removed today (Thursday) because of the decision to reduce the amount she receives for mobility support through the new personal independence payment (PIP).

Disabled activists said that her case demonstrated the impact of the government’s “vicious” social security reforms, its attempts to cut spending on disability benefits, and the impact of introducing PIP, particularly on those with mobility impairments.

Jones only began receiving PIP in April 2014, after having her leg amputated the previous year.

She was previously an accountant, but was dismissed from her job in June 2014 because she was not able to tell her employer when she would be able to return to work following health problems.

Due to diabetes, high blood pressure, neuropathy, asthma, depression, the amputation, and being prone to leg ulcers in her remaining leg, she was awarded the enhanced rate for both the mobility and daily living components, after a face-to-face assessment by government contractors.

She used the enhanced rate mobility component to lease a Motability vehicle, which she has been driving for the last year.

But 12 months after securing the PIP award she was told she was being reassessed. Two months later – without any further face-to-face assessment – the Department for Work and Pensions (DWP) told her she no longer qualified for the enhanced mobility rate, and so would have to return her Motability car.

She asked DWP to reconsider its decision, in a process known as a “mandatory reconsideration”, which has to be carried out before she can appeal to a tribunal.

Just three days later she received a call from a DWP civil servant who confirmed that the reason she had lost her entitlement to the enhanced mobility rate was because she could walk between 20 and 50 metres without any pain.

Under disability living allowance (DLA) – which is being replaced by PIP for working-age claimants – someone is eligible for the higher rate if they cannot walk more than 50 metres, but under PIP this criteria has been cut to just 20 metres.

Jones insists that she cannot walk more than 20 metres without pain, and that a short walk also leaves her breathless, due to asthma.

She said: “I can get from my front door to my car and I get breathless. I can get across the road but I am out of breath.

“Even though I have a prosthetic limb I still get pain in my stump and in my remaining leg and in my lower back. NHS prosthetic limbs are metal, wood and plastic. I just don’t think they appreciate that.”

Soon after the call from DWP, she received a letter from Motability saying that it planned to reclaim her car on 6 August.

This morning (6 August), when her husband called DWP, he was told that, following the mandatory reconsideration, they were sticking by their decision. This afternoon, a representative from Motability reclaimed her car.

Because her husband does not drive and works all day, Jones said she would now find it almost impossible to leave the house.

She said she was furious at the decision and how she had been treated.

She said: “To be assessed without being seen, that is cost-cutting. They are making decisions about me and my condition without actually seeing me.

“I know I am not alone. I know there are people in a worse state than me who are losing their benefits.”

She added: “It’s going to make things incredibly difficult because I have to go to physio every week, I also have appointments at my GP and at the local hospital, and two counselling appointments a week.”

She can’t walk to the nearest bus stop, because it is too far, and can’t use public transport independently even if she could reach the bus stop.

She said: “I will just have to sit indoors all day. I sleep downstairs, my bathroom is downstairs. These four walls of my living room is it. We have a conservatory but to all intents and purposes this room is it.”

Government figures predict that, with the mobility criteria set at 20 metres, 548,000 of the 892,000 working-age people who were receiving the higher rate of the DLA mobility component in February 2013 will not receive the enhanced mobility rate of PIP once they are transferred to the new benefit.

Jones said: “It is an absolute disgrace. I have a friend whose cousin works for DWP. She goes home and cannot sleep because of the decisions she is being asked to make regarding people’s claims.”

She plans to appeal against the DWP decision, and if successful she will be able to apply for a new Motability vehicle.

Disabled campaigner and researcher Catherine Hale said: “This case proves that the Tories’ claim to be providing more support to the ‘most vulnerable’ via PIP is an outrageous lie.

“The DWP appears to be under pressure to remove support even from people with incontrovertible mobility impairments in order to reduce spending by the government’s 20 per cent target.

“As with the employment and support allowance fiasco, how much of these welfare ‘savings’ will be lost to the tribunal system as people with clear entitlements like Ms Jones fight for their right to simply leave their home?”

Linda Burnip, co-founder of Disabled People Against Cuts, said: “This case shows how vicious the change of criteria from being able to walk 50 metres down to only 20 metres actually is in reality and how that change can devastate someone’s life.

“At the very least, some option should be in place to ensure that no-one’s vehicle is repossessed until the outcome of an appeal has been made so that disabled people do not wrongly suffer, and to make the best use of Motability’s apparently limited resources.”

Pat Onions, founder of Pat’s Petition, said: “If the government keep drawing the criteria for benefits tighter and tighter, then many individuals will lose support.

“This decision is appalling and we hope the decision can be reversed.

“But it is good that this case has been highlighted in the [media] and we hope that the public will realise how many more individual cases there are that don’t reach the [media].”

Michelle Maher, from the WOWcampaign, said the case was a “shocking indictment again of disabled people being penalised under a system that was designed to remove 500,000 from DLA/PIP”.

She said: “The fact it was done without even seeing the woman is even more worrying. But the government, without examining one person, said half a million would lose out under PIP, so we shouldn’t be surprised.

“Sick and disabled people are being punished for being something they had no part of, caught in an ideological attack by a Tory party determined to [remove] all forms of support.

“Somewhere along the line, disabled people became the vilified, the shirkers, when pain and disability can’t always be seen when walking 20 metres.”

Motability said that it provided support for customers who lost their vehicles in such situations, and allowed them to keep their car for seven weeks after they had been notified of the PIP or DLA decision.

Motability also sends them a booklet with information on buying a new or used car, insurance, tax, breakdown cover, servicing, maintenance, adaptations and other mobility options.

A Motability spokesman said: “Motability has no role in determining who should receive DLA or PIP; that is solely the responsibility of DWP.”

He added: “Customers are able to challenge if they disagree with the DWP decision, initially by asking DWP to reconsider their decision and then by appealing to HM Courts and Tribunals Service.

“However, DWP does not continue to make DLA or PIP payments while a decision is being challenged and the Motability Scheme is therefore not able to leave a vehicle with the customer.

“If their challenge is successful and the enhanced rate of the mobility component of PIP is subsequently awarded, the customer will of course be eligible to re-join the scheme.”