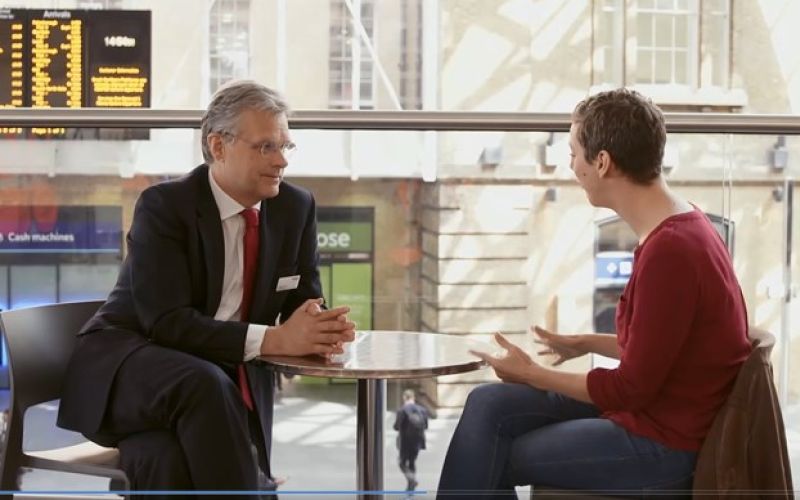 A disabled comedian and activist signed up by Network Rail to launch its new access campaign has criticised its chair after discovering that he called on the government to slash funding to make stations more accessible.

Francesca Martinez, who has campaigned against government cuts to support for disabled people, was “shocked” when told by Disability News Service (DNS) of the actions taken by Sir Peter Hendy.

Martinez had spent much of the day fronting the launch of Network Rail’s Spaces and Places for Everyone campaign, including giving media interviews backing the campaign.

But DNS then told her that Sir Peter had recommended in a spending review for the government that nearly £50 million allocated to the Access for All programme should be delayed until 2019 at the earliest.

She said: “This is really important to know because if these cuts are carried out then the impact would no doubt outweigh the positives of the Network Rail campaign.

“I’m going to write to Network Rail and put this to them. I campaign actively against cuts all the time. This seems to be going contrary to their campaign.”

In an email she sent to Sir Peter after learning of the cuts, she said: “As a prominent disability campaigner, I must raise these concerns with you because I believe that the flurry of cuts to welfare, and the austerity measures, are greatly impacting on disabled people and reducing their ability to lead happy, fulfilled lives.

“So I am worried that this delayed spending proposal will be part of the trend of eliminating vital services and funds dedicated to improving access and equality.”

She told DNS later that she was “deeply concerned” about the recommended cuts, which would mean that “urgently needed accessibility upgrades to our very old rail system will be delayed for years”.

She stressed that she had no idea about these cuts when she agreed to front the campaign, and added: “At a time when many disabled people are still unable to use their local stations, this delay will mean further discrimination and negative impact on their lives.

“As someone who is passionately committed to fighting austerity and welfare cuts, I know that disabled people are already the hardest hit group in society, and I fully support charities such as Transport for All in their calls for the government to reject this spending delay.”

Martinez is best-known among many disabled campaigners for fronting the WOW campaign, which calls on the government to assess the overall impact of its cuts to disabled people’s support.

She said she previously had no idea that Sir Peter had recommended that Access for All funding for 2014-19 should be cut from £102 million to £55 million, with the rest carried over to the next spending period, 2019-24.

Seven organisations – Transport for All, Inclusion London, Disabled People Against Cuts, Disability Rights UK, RNIB, Muscular Dystrophy UK and the Campaign for Better Transport – wrote to transport secretary Patrick McLoughlin in May, calling on him to ignore Sir Peter’s recommendation.

Martinez said the Network Rail campaign was about the need to “cater for everyone’s needs from the beginning” and not as “an afterthought”, as has happened in the past.

She said the campaign was targeted at the entire rail industry, including the train operating companies which run most stations, and aimed to “help the rest of the industry to follow suit”.

She also praised the campaign’s efforts to consult with disabled people around the country to ask them what needed to change.

She said: “If we want an equal society, we have got to have a rail network where everyone can access it without fear or worry.

“For a lot of [disabled] people there is that kind of rising panic and stress when they approach a journey and that kind of question of, ‘What will happen, will I be met, will something go wrong?’”

She added: “It’s all very well having an inclusive environment, but staff training is equally important.

“You have got to have staff that are aware and compassionate and patient across the whole industry because I think a lot of issues that some of my disabled friends felt, and myself, is that some of the staff can make you feel like a burden or an annoyance and be reluctant to help you, so in tandem with physical environment you also need to make sure the attitude is there.”

A survey for Network Rail found that two-thirds of disabled people use the railway, and of those, a quarter (24 per cent) do not feel that their journey will be easy, and a third (33 per cent) would use it more if it was more accessible.

“We are committed to changing this, and doing what is necessary to make sure that inclusivity is deeply embedded in our culture.”