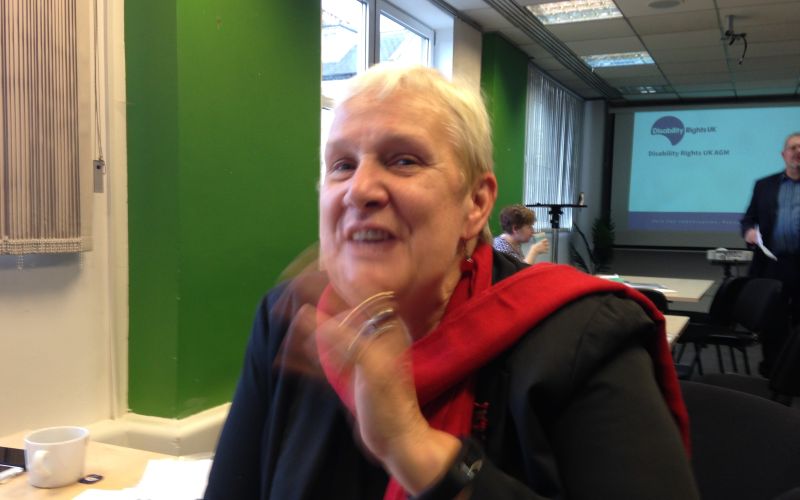 Urgent action is needed to address the plight of tens of thousands of mental health service-users who are subjected to detention and compulsory treatment under “intrinsically discriminatory” legislation, according to a leading disabled expert.

Dr Rachel Perkins pointed to figures which show that the number of detentions under the Mental Health Act (MHA) rose by its highest proportion in 2014-15, to more than 58,000.

Perkins (pictured) told Disability Rights UK’s annual conference in north London that MHA “deprives people of their human rights” and is “a law that only applies to you if you are deemed to have a mental health disorder”, but few if any organisations have been campaigning to address that discrimination.

Perkins, vice-chair of the Equality and Human Rights Commission’s disability committee, a senior consultant with Implementing Recovery through Organisational Change (ImROC), and herself a mental health service-user, said the issue would be raised with the UN’s committee on the rights of persons with disabilities.

Evidence of the discriminatory nature of mental health legislation will be included in the shadow report being compiled by Disability Rights UK and other disabled people’s organisations on the UK’s implementation of the UN Convention on the Rights of Persons with Disabilities.

Perkins said the dominant narrative in mental health was the need for better access to treatment, and for service-users to be more open about their impairments.

But she said the discriminatory Mental Health Act meant that people with mental distress were at risk of being locked up, forcibly treated and injected with drugs, even though most of them have the capacity to refuse or consent to treatment.

The original estimates suggested there would only be 400 to 600 CTOs a year, she said.

Perkins told the conference that Labour had argued that CTOs would lead to fewer people with mental health conditions being locked up, but detention had instead continued to rise.

She said: “This should have reduced the number of people in hospital. It hasn’t.

“The number of times we have used this law to detain people in hospital has gone up and up and up.”

In 2014-15, she said, there were 58,000 occasions on which “we locked people up in hospital and injected them against their will, the largest increase ever seen in a year.

She pointed to research in The Lancet from 2013 which showed that the use of CTOs “does not confer patient benefits, despite substantial curtailment of individual freedoms”.

She told the conference: “CTOs do not benefit people in any way.

“We cannot talk about independent living while there is a whole class of disabled people for whom a completely separate law applies.”

Perkins told the conference that once people are seen as having a health condition rather than being a disabled person they can become “trapped” and subject to “medical interventions, charity and good works”.

And she said that people with mental health conditons have not seen the advances in rights enjoyed by other disabled people, and are still often forced into institutions, with only 60 per cent of people using mental health services having a “secure and stable place to live”.

She told Disability News Service later that the issue was causing “huge amounts of distress” among service-users.

She said: “People are extremely angry about it. People see themselves as doing something wrong, as being prisoners; they see mental health services as policing their treatment, rather than providing support.

“Where do people turn to for help if those people supposed to be helping them just end up forcing them to [take medication]?”

She added: “It feels to me that what has happened is we have moved towards the right to treatment and that has substituted for the right to life, the right to participate.

And many CTOs lead eventually to service-users being recalled into detention, she said.

She added: “I think there’s a reluctance for anyone to take [this issue] on because there is still some emotion that people with mental health problems are going to be dangerous and therefore we need to protect everybody or protect people from themselves – very much ‘looking after’ rather than a rights-based narrative.”

She said the “disability world was still not seeing mental health as a core part of its business”, so the issue was not taken up.

She added: “I don’t think there is a large, social-model, rights-based mental health movement.

“My sadness is there has never been a joint working between the mental health world and the disability rights world, as there has been in other parts of the world. In Britain it still seems really separate.”