You are here: Home / Politics / Mental health reforms ‘must go further’, MPs and peers are told 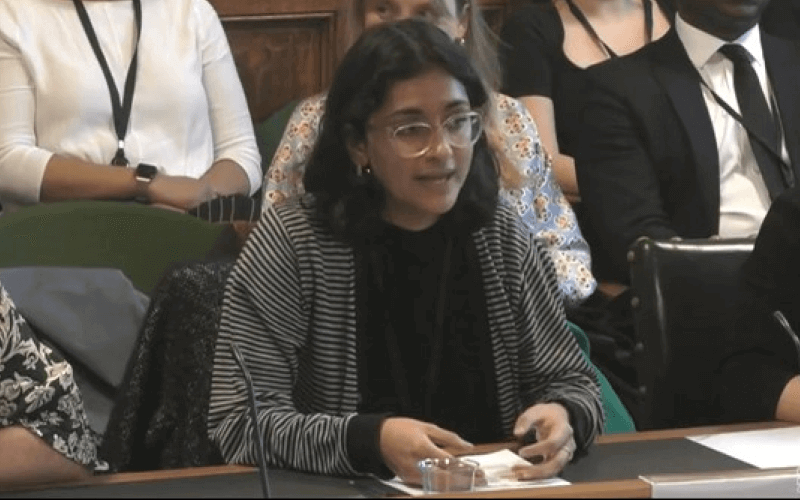 A user-led organisation has warned MPs and peers that the government’s planned mental health reforms do not go far enough and have failed to engage with disabled activists who have been pushing for a more rights-based approach.

Mary Sadid, policy manager for National Survivor User Network (NSUN), a network of groups and people with experience of mental distress, said there were concerns that the experiences of those detained under the Mental Health Act would not improve for many years, even if the reforms became law.

She agreed with representatives of non-user-led organisations that also gave evidence this week to the joint committee on the draft mental health bill that the proposed reforms included “positive changes”.

But she said: “We are really concerned about the implementation period and how long it’s going to take for some of these reforms to come into practice.”

And she said there also needed to be “adequate resourcing”, monitoring and evaluation of any changes introduced through the bill.

The draft bill is based on a white paper published in January 2021, which itself was built on recommendations made by Sir Simon Wessely’s independent review of the Mental Health Act in 2018, which was criticised for falling “significantly short” of recommending full human rights for people in mental distress.

Marsha de Cordova, Labour’s former shadow minister for disabled people, said that some user-led groups had said the government’s draft bill did not comply with the UN Convention on the Rights of Persons with Disabilities (UNCRPD) and had called for a “complete overhaul”.

Sadid told her there was no consensus among user-led groups about the detail of the UN convention, but NSUN believed that Wessely’s review and the draft bill had failed to engage with the spirit of the UNCRPD and a rights-based approach.

She added: “We think that where there is consensus in user-led spaces is for pushing towards a rights-based approach and we really do think that engaging with the spirit and engaging with a rights-based approach would have been beneficial to the independent review and obviously the draft bill, but that’s just not something that we’ve seen happen.”

The draft bill, which applies to England and Wales, will reform the Mental Health Act 1983, and is being examined in detail by the joint committee before the government publishes a final version.

In response to another question from de Cordova, Sadid said that NSUN did not believe the bill would make “significant inroads” into the “disparities and inequalities” faced by racialised communities without the government taking further measures and ensuring there was monitoring and evaluation of its reforms.

She said: “We know that racialised groups are more likely to experience restrictive practice, they are more likely to be offered medication over psychological therapies; we need also to be monitoring these outcomes and seeing how they are changing.”

NSUN was among the organisations that wrote to the then health and social care secretary Sajid Javid last December to highlight institutional racism in the Mental Health Act and to ask him to commit to “publishing annual rates of detentions of racialised people and a commitment to reduce these rates”.

Lucy Schonegevel, associate director for policy and practice at Rethink Mental Illness, said her charity was “hugely supportive” of the draft bill but it needed to “go further in a number of areas”, including addressing racial inequalities.

She said Rethink “really strongly” believed that four key principles underpinned the draft legislation, as the Wessely review had recommended.

These principles are respecting service users’ views and choices; ensuring the act’s powers are used in the least restrictive way possible; supporting patients to get better, so they can be discharged from the act’s restrictions; and ensuring patients are viewed and treated as rounded individuals.

But Schonegevel said these principles should be more explicit in the bill, particularly in the wake of two documentaries in the last month which have exposed abuse in mental health hospitals, by BBC’s Panorama and Channel 4’s Dispatches.

She said the documentaries – one of which uncovered a “toxic culture” at the Edenfield Centre, in Prestwich, near Manchester, and another that exposed abuse on two wards run by Essex Partnership University NHS Foundation Trust – “showed the opposite of what these principles are trying to do are put into practice in too many places around the country”.

She said: “We hear from service-users that they actively try and avoid going into hospital to receive care.”

Sophie Corlett, director of external relations at Mind, said the charity hoped that parts of the legislation would “shift some of the balance of power to people” and away from the coercive elements of the Mental Health Act.

Andy Bell, deputy chief executive of the Centre for Mental Health, told the committee that the draft bill “takes us in the right direction in terms of modernising the Mental Health Act, bringing many of the proposals that were in the independent review into legislation” but that it was “disappointing that not all of the elements of the independent review are in there”.