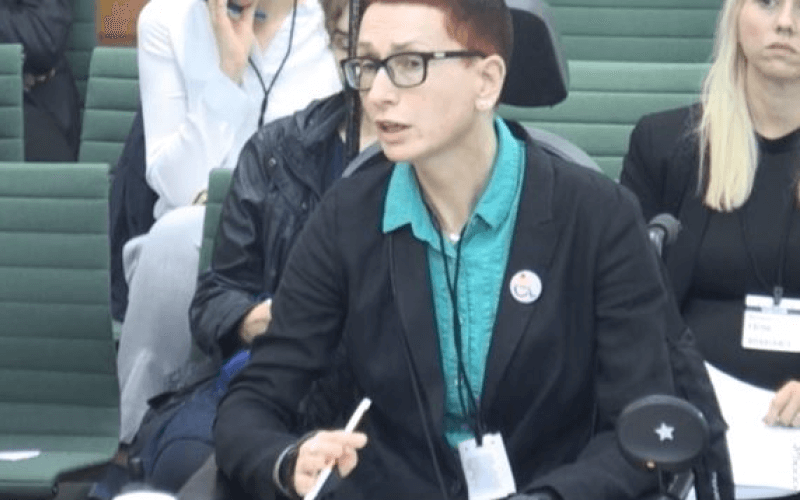 A disabled activist has told MPs of the discrimination and other barriers faced by LGBT disabled people who need to access social care.

Dr Ju Gosling, co-chair of the LGBTQI+* disabled people’s organisation Regard, told a Commons committee that members of her community were much less likely to be able to rely on family and friends for support with their care needs.

And when they accessed support from the care industry, they often faced discrimination from personal assistants (PAs), care workers and their local authority.

She was giving evidence to the women and equalities committee as part of its inquiry into health and social care and LGBT communities.

Gosling (pictured) pointed to research co-produced by Regard, the University of Bristol, the Social Care Institute for Excellence and the LGBT charity Stonewall, which was published two years ago.

More than half of those surveyed for the research said they never or only sometimes disclosed their sexual orientation or gender identity to their PAs.

And more than a third said they had experienced discrimination or received poor treatment from their PAs because of their sexual orientation or gender identity, with one man having been sexually assaulted after he told his PA he was gay.

Gosling told the MPs she believed the necessary protections were included in the Equality Act and the Care Act, so the key problem was with implementation of the legislation.

She said the research had also found that more than 90 per cent of those surveyed said their needs as an LGBTQI+ disabled person were either not considered or were only given some consideration when they were assessed or reviewed by their local authority.

Almost a third felt they had been discriminated against by their local authority on the grounds of their sexual orientation or gender identity.

Gosling said there were often problems recruiting PAs to provide paid support at home, with PAs often not wanting to be identified as a frequent visitor to a gay person’s home in case they were exposed to harassment.

She said that LGBT people were much more likely to need social care because they were “much more likely to move away from where we grew up, so we don’t have lifetime friends, our contact with our biological family is at best polite, is seldom close and is often non-existent [and] we’re much less likely to have children”.

For the same reasons, LGBT people are less likely to have access to advocacy from friends and family, she said.

She told the committee: “We would very strongly argue for the return of the policy that there should be a centre for independent living (CIL), led by disabled people, in every local authority area because peer support is not only the cheapest but also the most effective way to provide monitoring [of the support being provided].

“Generally speaking, if you’re isolated at home you’ve got nobody to tell, [but] if you’ve got peer support meetings once a month for direct payment users you’ve got someone to tell, you’ve got staff, you’ve got workers.”

But she said many disabled-led CILs were being closed or the services they had provided had been taken on by “generic support agencies that aren’t run by disabled people” and that “don’t really know what the issues are and of course they don’t know how to tackle them”.

*People who identify as lesbian, gay, bisexual, trans, queer, questioning, intersex or who hold identities such as non-binary