You are here: Home / Benefits and Poverty / ‘My picture is proof that healthcare professionals lie in benefit assessments’ 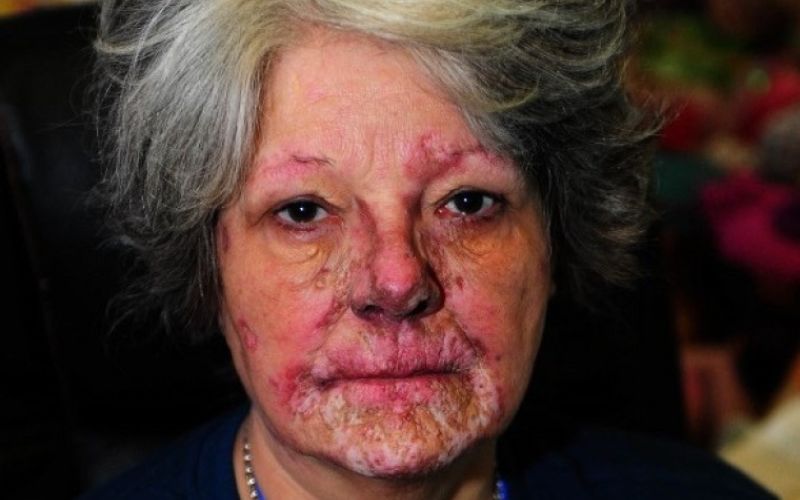 A furious disability benefit claimant has produced what she says is the clearest evidence yet that healthcare professionals working for the Department for Work and Pensions (DWP) are writing dishonest assessment reports.

CeaJay Clem, from Gloucestershire, has chronic discoid lupus, which has caused a significant facial disfigurement (pictured).

But despite the impact of the condition on her skin, the doctor who assessed her in January wrote in her report that her complexion was “normal” and that she “looked well”.

Clem contacted Disability News Service (DNS) after reading about more than 200 cases in which claimants of personal independence payment (PIP) have described how their assessors from Atos and Capita produced dishonest assessment reports, which have led to them losing their benefits or having them cut.

Clem’s reassessment was carried out by another contractor, Maximus, and was testing her eligibility for the out-of-work disability benefit, employment and support allowance (ESA).

Because of her condition, she is unable to wear make-up and is highly sensitive to all UV light – which is used in nearly all work places – but she also has complex post-traumatic stress disorder, asthma and other health conditions, and uses a mobility scooter because she cannot walk or stand for long.

She had previously been in the ESA support group, but as a result of what she says was a completely dishonest report, she lost all eligibility for ESA in February, even though the assessor admitted that she had “current firm detailed plans for self-harm”.

She is now awaiting a date for an appeal tribunal.

She said her photograph and report provided “proof positive” that assessors were lying in their reports.

Clem said her report was littered with other lies and inaccuracies.

The reports she has been sent refer to her “skin problem”, “skin condition” and “skin complaint”, and downplay the seriousness of the condition, even though she cannot leave the house for more than 15 minutes without her skin burning.

She said she was “absolutely mortified that a medical professional would lie and downplay my conditions.

“I was expecting to fail on the assessment, it happens, but fail due to deliberate lies? That shook me to my boots and was a total emotional crusher for me.

“It put me into a deep depression and such a state of high anxiety I didn’t know which way to turn. I just wanted to explode.

“I am a very strong-minded woman and it takes a huge amount to upset me and this has almost broken me.

“I dread to think how people are coping with their situation when they maybe don’t have the same strength as me, or have simply just run out of strength.”

Although the decision to find her fit for work was covered widely in the media earlier this year, those stories did not highlight the claims of dishonesty in the assessment report.

A DWP spokesman declined to comment on the honesty of the assessment – as the department has done repeatedly with similar stories – or to say whether DWP would look again at her case.

But he said in a statement: “We expect the highest standards from our assessment providers.

“As you know, all the health professionals are subject to on-going quality audits to ensure they continue to deliver high-quality assessments.

“Should they fall below our required standards, they are stopped from carrying out assessments.

“Decisions are backed by evidence from the claimant’s GP or medical specialist.

“Ms Clem has appealed her WCA assessment and this will now be reviewed by an independent tribunal.”

Maximus failed to respond to a request for a comment.