Nine in 10 disabled people felt discriminated against when they bought tickets to watch live music, because the booking system they had to  deal with was so inaccessible, according to a new report by a pioneering user-led charity.

Nearly half of those questioned said this discrimination caused them to consider taking legal action.

The report by Attitude is Everything (AiE) – which works to persuade the music industry to implement best practice in disabled people’s access to live music – found that only two of every 10 music venues offered disabled customers the option to buy tickets online.

But the report also found that three-quarters of those customers prefer to purchase tickets online, rather than by phone.

And 83 per cent of the Deaf and disabled mystery shoppers who completed a questionnaire said they were put off buying tickets by the access problems they had faced, with most blaming both ticketing agencies and venues.

Suzanne Bull, AiE’s chief executive, said this was the “most striking statistic” in the report, as it illustrated how improving access could benefit businesses. She said the report was the first to provide evidence of this strong business case for the live music industry.

Bull said the number of Deaf and disabled people buying tickets to Reading Festival in 2013 increased by more than 100 per cent on the previous year.

Including their family and friends, these disabled customers brought in more than £115,000 in ticket revenue, as well as an estimated £70,000 spent on food and drink.

Bull said there was now “no denying from the statistics that there is a strong business case for improving access, and the customer base of Deaf and disabled people is growing year-on-year”.

She said later: “If you get it right, the increase is dramatic. [Venues and festivals] are more engaged with us now and I think that is the difference.

“They care a little bit more and it is not just that they see a moral responsibility to do that.

“Now we have uncovered the business case, that will make a difference.”

The charity plans to campaign for accessible ticketing systems to be introduced across the live music industry, following larger festivals such as Glastonbury, Reading and Leeds, which are “leading the way”.

It wants clear access information provided in advance of tickets going on sale; ticket-buying options that are identical to those offered to non-disabled customers; and a new system that would prevent customers having to provide proof of their impairment every time they buy a ticket.

Jonathan Brown, secretary of the Society of Ticket Agents and Retailers (STAR), admitted that the report was “so clear in documenting that there is a serious problem that needs to be addressed”, but that it provided a “clear commercial opportunity” for the industry.

STAR is coming together with AiE and organisations representing music arenas and theatres to set up a working group to examine the issue of accessible ticketing.

Despite progress on physical access since the last report – published in late 2011 – AiE’s State of Access Report 2014 reveals that only two-thirds of venues had a step-free entrance, while less than half were step-free throughout and had an accessible toilet.

The report is based on more than 200 mystery shopping reports from venues and festivals, 40 questionnaires and 13 interviews, all collected between April 2011 and March 2013.

It reveals that “probably the key factor” in deciding the accessibility ratings given by the mystery shoppers and whether they enjoyed an event was if the venue or festival provided a viewing platform for disabled customers.

More than two-fifths of venues and two-thirds of festivals provided at least one viewing platform.

Graham Griffiths, AiE’s business and operations manager, said there had been “huge progress” with access to festivals, particularly with the provision of platforms.

But Griffiths said the biggest change was in policies on access. “The idea that you would get a free ticket for a personal assistant is widespread. A few years ago we were really having to convince the music industry that this was not a concession.”

Bull said that AiE now wanted to look at how the industry markets itself to people with learning difficulties, who she said could often be put off by inaccessible information or question whether they could cope with attending a live music event.

The report’s launch was held at the Roundhouse in Camden, north London, which was presented with AiE’s Charter of Best Practice gold award. It is one of only four venues and two music festivals that have so far secured the gold award for their accessibility. 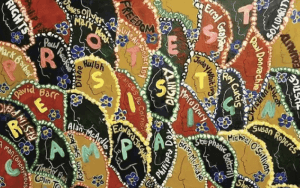