You are here: Home / Politics / No 10 access information will remain secret… because of terrorist threat 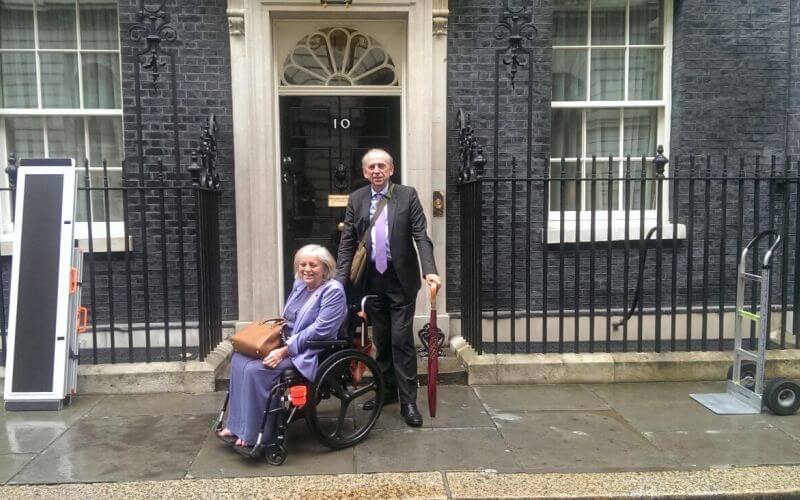 Documents that could reveal why the government has refused to remove the two iconic – and inaccessible – steps that lead to the front door of 10 Downing Street will not be released, because of a risk that the information could be useful to terrorists.

The Information Commissioner’s Office (ICO) has told Disability News Service (DNS) that although some information does exist, it does not need to be released by Historic England because doing so could cause “a direct or immediate threat to the UK”.

The information commissioner, Elizabeth Denham, even visited Historic England to view the documents because of their “sensitive nature”.

DNS has been trying for more than 18 months – through freedom of information (FoI) requests – to discover what discussions have taken place about the possibility of removing the steps.

Although there is step-free access at the rear of 10 Downing Street, wheelchair-users wishing to use the front door must rely on a portable ramp.

DNS has also tried to obtain information from the Cabinet Office, but it has insisted that the only relevant recorded information was in a draft memo that said that increasing the size of an internal lift had “improved accessibility”.

Despite this claim, Historic England has previously told DNS that the Cabinet Office was “rolling out a programme of improvements to the grade I listed complex to proactively address disabled access” and that an “accessibility audit is still being worked through”.

Now ICO has decided that Historic England – the government-sponsored public body responsible for “championing England’s heritage” – was right not to release relevant documents it holds about access at 10 Downing Street.

It said Historic England was correct to rely on regulation 12 (5) (a) of the Environmental Information Regulations (EIR), which provides an exemption to its usual duty to release such information for reasons relating to “international relations, defence, national security or public safety”.

An ICO senior case officer told DNS: “The withheld information does reveal a greater level of detail about No 10 than is currently publicly available and it cannot be dismissed that this information could be of use to individuals wanting to commit acts of terrorism.”

She said Denham was aware of “the importance of disability access to public buildings and the need to address poor provision” and so “accepts that there is an argument in favour of disclosure of information relating to information concerning such access to No 10 to demonstrate the actions taken for inclusive access to such a significant building”.

A government spokesperson refused to comment on the information commissioner’s ruling, but she said in a statement: “We are committed to improving access to Downing Street and have recently installed a new lift and more accessible toilets as part of work to improve facilities in this historic building.”

An Historic England spokesperson said: “We are aware that the information commissioner has agreed with our decision to withhold information relating to the accessibility audit at Number 10 Downing Street.

“We will continue to work closely with Cabinet Office on the important process of improving access to this significant complex of buildings.”

Picture: 10 Downing Street, after the building won an access award in November 2017… despite the steps to the front entrance