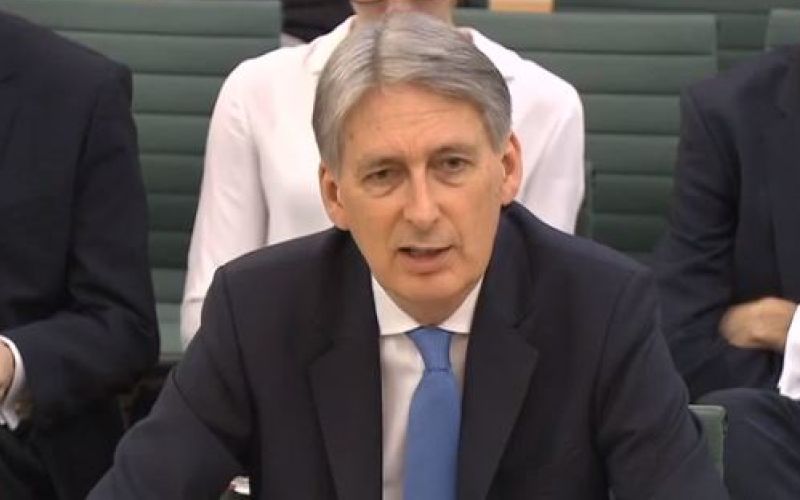 The chancellor of the exchequer is facing calls to apologise after he made “disgraceful” comments that blamed disabled people for the country’s poor economic performance.

Those attacking his comments included the Disabled Police Association, which described them as “unfair (and inaccurate)”, while Labour’s shadow minister for disabled people, Marsha de Cordova, said they were “disgraceful”.

Hammond (pictured) had been asked by the committee to explain the reasons for the country’s low levels of productivity growth.

The Treasury had not said by 1pm today (Thursday) whether Hammond would be apologising for his comments.

A leading disabled consultant, Tracey Proudlock, described the comments on Twitter as “disgraceful”.

The Disabled Police Association said, also on Twitter: “It’s more difficult for disabled people to find employment than non-disabled – unfair (and inaccurate) for those who are working & paying taxes to be blamed for holding back the economy.”

Stephen Brookes, a coordinator of the Disability Hate Crime Network, said they were “the most insulting, disgraceful, anti-disabled comments made by a senior politician for years”.

Brookes said Hammond’s words were “not even supportable by reality and facts”, and he added: “The amount of disabled people who work hard and often for lower than equal wages to counterparts is a massive contribution to all local and national services.

“The damage to disabled people’s dynamism is immense.

“No wonder faith in, and respect for, statutory bodies and politicians and their duty of care to minority groups and their value to society is crumbling.”

De Cordova asked the Commons deputy speaker yesterday if Hammond would be making a statement and issuing an apology to MPs for his comments “scapegoating disabled people as a reason for low productivity”.

In a statement, she said: “As a disabled person I am shocked and appalled that Philip Hammond is trying to blame me and other disabled people for the Tories’ economic failure.

One disabled campaigner, Nicky Clark, said on Twitter: “God this is exhausting. Is there NOTHING disabled people aren’t blamed for?”

David Gillon, one of the most prominent critics of the government’s much-criticised Disability Confident employment scheme, said on Twitter: “When @PhilipHammondUK claimed disabled people lower #UK productivity, he was making same claim used to force me out of my aerospace engineering career. With same absence of evidence.

Anita Bellows, a researcher with Disabled People Against Cuts, added: “I am wondering how many businesses are going to sign up to the #DisabilityConfident campaign today.”

Philippa Barraclough was another to criticise the comments on  Twitter, saying: “This is one of the most disgusting things I have ever heard!

“As someone who is living with #learningdifficulties & who is #partiallysighted I find this disgusting. I am in employment… [would] quitting my #job be better for the #economy?”