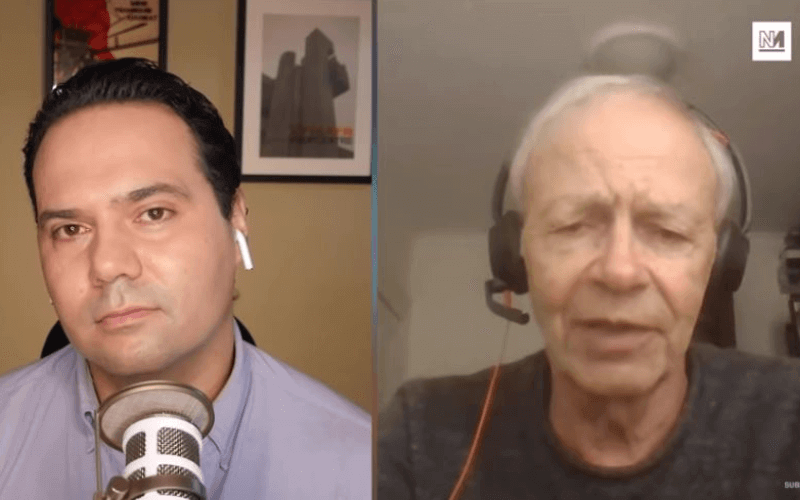 Outraged disabled activists have criticised a left-wing media organisation for publishing an interview with a philosopher who has repeatedly advocated killing disabled babies, and for failing to challenge him on his views.

Novara Media’s video interview with Peter Singer focused on his position as one of the best-known animal rights philosophers, and almost completely bypassed his views on disabled people.

When Singer’s views were briefly touched on by Novara co-founder Aaron Bastani, there was no effort to challenge him on his past statements.

Instead, Bastani (pictured, above, left) asked him to respond to the “controversy” and “criticisms that you’ve had from people around disability activism and so on”, but he failed to challenge Singer on any of the disturbing statements he had made in the past.

Singer (pictured, above, right) repeated some of those statements.

He told Bastani that “parents of children with severe disabilities and poor prognoses should have the option of ensuring that those children do not live, that they die rapidly and humanely”, which he described as “a proposal”.

But Bastani made no response to this and made no attempt to question this “proposal”.

Anger at the interview, both the decision to publish it and the way it was conducted by Bastani, was led by Disabled People Against Cuts (DPAC), which said it had caused “justifiable outrage”.

DPAC is set to meet with Novara today (Thursday) “in order for our members, especially those with learning difficulties, to express their dismay, hurt, and political objections to how the interview was conducted”.

Andy Greene, a member of DPAC’s national steering group, said Bastani had allowed Singer to continue “without interruption, without rebuttal, without being challenged or asked to provide evidence for claims and assertions he made.

“No attempt was made to hold Peter Singer accountable in a conversation that began with the premise that disabled children’s lives were worth less than others.”

He added: “Unfortunately, there’s nothing ‘new’ or ‘different’ about Novara Media in the eyes of many disabled people now. Only more of the same old same old.

“It is deeply upsetting that left-wing media organisation such as Novara would make a decision to interview Singer without acknowledging or challenging these eugenicist views.”

For the last 40 years, Singer’s views on disability have shocked and angered disabled activists and allies across the world, and have led to repeated controversies over his various appointments, interviews, publications and speaking engagements.

As a strict utilitarian, Singer has previously made it clear that he believes some disabled babies should be killed after birth, including those with haemophilia, spina bifida and Down’s syndrome, because he has said they are lives “not worth living”.

He has argued: “When the death of a disabled infant will lead to the birth of another infant with better prospects of a happy life, the total amount of happiness will be greater if the disabled infant is killed.

Singer has also suggested that, if it had been his choice, he would have wanted his mother, who had Alzheimer’s disease, to be given a lethal injection in the last months of her life.

And more recently he has suggested that it might not be wrong to rape a person with learning difficulties and high support needs if they do not have capacity to consent to sex.

A DPAC spokesperson said: “We are disappointed that prior to this incident Novara had consistently failed to take up advice from individual DPAC members concerning the importance of acquaintance with the social model of disability and the particular form of oppression that disabled people face.

“This led to a situation where Singer was given a platform to express views that encourage division and hate without challenge, and at a time of rising hostility towards disabled people and the explicit devaluing of disabled people’s lives that has characterised the pandemic – which we are still living through.

“Either the interviewer lacked even the most basic understanding of why Singer’s views are problematic for disabled people or he chose not to deploy those arguments.

“It is important that we challenge the exclusion and marginalisation of disabled people and all the more frustrating when we have to do this among those who consider themselves to be progressive.”

Novara refused to answer questions about the interview from Disability News Service (DNS), including why the organisation thought it was right to give a platform to Singer, why he was not challenged more rigorously on his views by Bastani, and what message the decision to interview Singer sent to disabled vegans and vegetarians.

But a spokesperson said: “We take the fact we’ve caused hurt to disabled people very seriously, so we certainly reject any insinuation that we sought to capitalise on Singer’s notoriety.

“As we’ve made clear, Singer’s views on disability are not those of Novara Media.

“We have a meeting scheduled with DPAC members later this week to hear their concerns and wouldn’t wish to comment further on editorial discussions before then.”

He also pointed DNS to a Novara statement, which said that Singer’s views on disability “are not those of Novara Media” and that it was “currently discussing the matter in line with our internal processes as a matter of priority”.

The statement said: “We take the fact that we have caused hurt to disabled people very seriously.

“And we acknowledge that criticisms of the decision to air this interview were made in good faith, and sit within a wider context of both Novara Media’s shortcomings on commissioning and publishing content on disability and the heinous assaults which have been waged against disabled people over the course of the pandemic.”