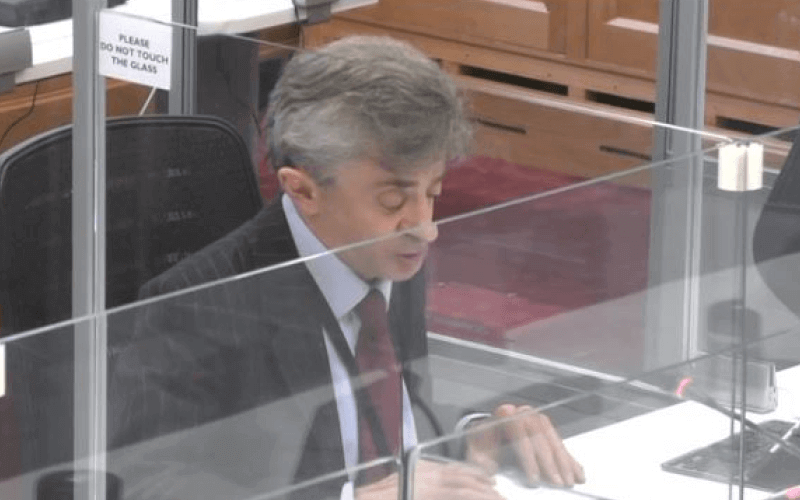 The government’s record on disability employment has come under fierce attack during a parliamentary meeting.

MPs and peers on the all-party parliamentary group on disability heard from experts from business, academia and the disability movement on Tuesday on the employment proposals they would like the government to adopt in its forthcoming national disability strategy.

They heard particular concerns about the government’s Access to Work and Disability Confident employment schemes.

They were also briefed on research – first reported by Disability News Service last October – that dismisses the government’s claim that it has reduced the disability employment gap over the last decade.

Justin Tomlinson, the minister for disabled people, has repeatedly bragged that official figures show the government has slashed the disability employment gap (the difference in the proportion of disabled and non-disabled people of working-age in jobs).

But Professor Kim Hoque, from the [email protected] group of researchers, told the meeting that research by his colleagues Professors Victoria Wass and Melanie Jones showed the gap had actually remained stable in recent years, once account was taken of the increasing number of people identifying as disabled when they would not have done so in previous years.

This was one of five key proposals he and colleagues made to officials from the Cabinet Office and the Department for Work and Pensions (DWP) at a meeting in February.

The proposals were also included in a report by the Centre for Social Justice’s Disability Commission, which reported in March and was chaired by Lord [Kevin] Shinkwin, the disabled Tory peer who chaired this week’s meeting.

Hoque recommended that employers signing up to the top two levels of the three-tier scheme should have to employ a certain proportion of disabled people in their workforce.

He said that other proposals put to DWP and the Cabinet Office included the introduction of mandatory reporting by employers on their disability pay and employment gaps; and further measures to ensure that organisations that win public contracts must demonstrate a track record, and pledge to make further progress, on disability employment.

He also said that research by [email protected] showed that employers that recognise trade unions typically have more advanced disability policies and practices.

He suggested the government should ensure legal rights for trade union equality representatives and disability champions to have time off to perform their duties, as their research showed that they “have quite pronounced effects in terms of supporting disabled people in the workplace”.

He said that representatives from other organisations at the February meeting supported the five disability employment proposals, including senior figures from Disability Rights UK (DR UK), the Business Disability Forum, the TUC and the NHS.

Angela Matthews, head of policy and research at the Business Disability Forum, was heavily critical of the way the Access to Work (AtW) scheme is run.

She told this week’s meeting: “Employers are currently telling us it is taking between two and nine months from the point of application to an employee getting what they need.

“That’s a lot of stress for everyone involved while waiting for adjustments.”

She told the meeting of a young Deaf woman who uses British Sign Language and had to switch from securing support through disabled student’s allowance to AtW for the third – industry-based – year of her four-year PhD course.

It took AtW six months before it would stop trying to contact the woman by telephone.

Matthews added: “Her Access to Work support was not in place before her year in industry was over. That’s a really sad story.”

She said that Access to Work must improve how it is used by those in “different job and work structures”, such as those in the gig economy, contractors, start-up businesses and those who are self-employed.

Fazilet Hadi, head of policy for DR UK, told this week’s meeting that they should “continue to be shocked by the employment gap between disabled people and non-disabled people” and that this had probably widened during the pandemic.

She called on the government to co-design plans and engage with disabled people on disability employment, and “understand what the barriers are to our employment”.

She said: “That’s not difficult, but they don’t do it on employment.”

She also called for a government plan to get one million more disabled people into work and to keep disabled people in jobs, as well as for better joined-up working between DWP and the Department for Education.

Hadi said the scheme “feels like you’re in the 19h century, not the 21st”.

She also criticised Disability Confident, which she said needed to be based “on outcomes and not on thin air and just aspiration”.

Lord Shinkwin later told fellow peers in the House of Lords (pictured) that the national disability strategy must be used to ensure “a radical reset of policy and policy-making” rather than “yet more tokenistic tinkering or tweaks to policy”.

The Tory peer said he had been “horrified” by the government’s “offensive and inept” national disability survey.

And he called on the prime minister to listen to the many business leaders who signed a letter to Boris Johnson backing the conclusions of the Disability Commission.

He said: “I hear that some ministers continue to argue against mandatory workforce reporting on disability by large firms with 250 or more employees, citing that old chestnut of having a philosophical objection as Conservatives to using the stick, as well as the carrot, to bring about progress.

“Well, this Conservative has a philosophical objection to failure.

“Some 26 years have now passed since the Disability Discrimination Act was passed. If the carrot alone was ever going to work, it would have worked by now.”