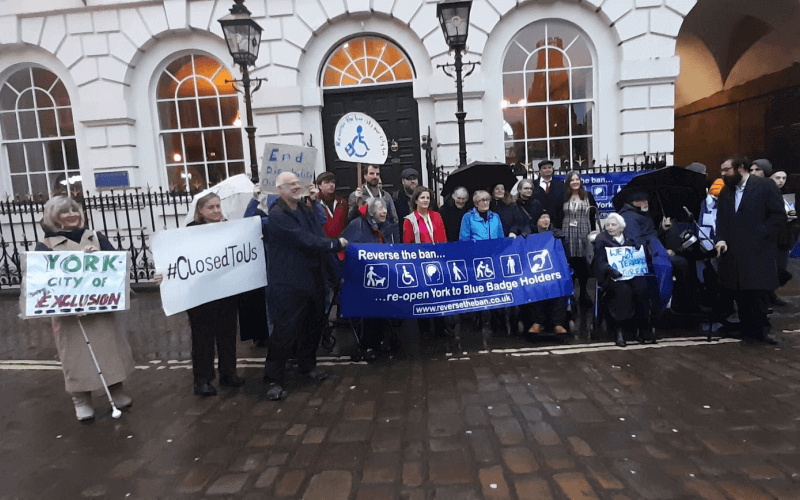 A protest outside York council has been hailed as an important step in disabled people’s year-long fight against the decision to ban blue badge-holders from their city centre.

Reverse the Ban, a coalition of disabled-led organisations and allies, held the demonstration outside a full council meeting last week to protest against City of York Council’s “discriminatory decisions adversely affecting disabled and older citizens”.

“There were around 60 people there. It was very important in terms of showing the council the strength of feeling out there about the discriminatory actions of this council.”

She added: “Later in the evening, the Labour councillors all stood up and went to the table in the centre of the chamber and put down their sacks of postcards.

“There were more than 10 sacks in front of the council leader, with the lord mayor sitting behind him. They really can be under no doubt now about the strength of feeling.”

Among the disabled-led organisations campaigning against the ban are York Accessibility Action, York Disability Rights Forum and York People First.

One of the postcards handed over had been signed by a leading disabled academic, Professor Tom Shakespeare, who lent the campaign his support while on a visit to York.

He said: “Disabled people are a part of society. The time to end the discrimination that prevents us playing a full part in the life of the city is long overdue.”

York’s own Paralympian, Beth Moulam, said: “Having a blue badge is not a perk or a luxury in life. It is a reasonable adjustment that many rely on in order to take part.”

The ban prevents vehicles, including those with blue badges, from entering York’s pedestrian “footstreets” zone from 10.30am to 5pm every day of the week.

Introduced initially by the council to create more space for pedestrians amid the COVID-19 pandemic, the exclusion zone was made permanent a year ago to “create a safer and more attractive city centre and to reduce inner city pollution”.

Since then, a council equality impact assessment (EIA) and a council-funded report by consultancy Martin Higgitt Associates have both found that the withdrawal of vehicle access from the city centre has had a strong negative impact on disabled people.

But while the EIA recommended that the council continues with the scheme as long as it provides improved blue badge parking on the outskirts of the area, the Higgitt report rejected the scheme, saying that “blue badge motorised access into the footstreets for disabled people with additional needs is required”.

Members of Reverse the Ban have cited the Higgitt report as well as the council’s public sector equality duty when making their case, but they have failed so far to persuade the council.

Williams said: “Nobody from the ruling administration came out to talk to anybody last night.

“We honestly believe the only way it’s going to get changed now is with a change of leadership.”

She added: “This administration doesn’t want to [reverse the ban] and we think it’s because they believe in the wholesale commercialisation of the public realm.

“By shutting us out it’s allowed them to have pavement cafés everywhere in the city, which of course is another problem for disabled people to get about.

“The cafés are forcing people into the road but it’s a road still full of vehicles (delivery and refuse, for example) so you can imagine how terrifying that is if you’re visually impaired, for example, especially as some of these vehicles are electric and silent.”

She added: “It’s made it a nightmare for all disabled people. We know many disabled people who now just don’t go into the city centre at all because even if they can physically get there, it’s just too difficult to get around.”

Reverse the Ban is now considering hanging large print copies of 650 of the postcards around the city as the next stage in its campaign.

The council told Disability News Service that the council’s executive member for transport, Andy D’Agorne, had spoken to protestors, while other executive members had offered to answer questions before joining the meeting.

But the council refused to comment on the signed postcards, or to say if it accepted that the protest showed the strength of feeling about the blue badge issue, or if it believed its approach was discriminatory.

It also refused to say why it had not accepted the findings of the Martin Higgitt report, if it accepted that its actions were breaching its public sector equality duty under the Equality Act, or if it accepted that the new pavement café culture in the city centre was placing disabled people at risk and making it too difficult for them to get around.

But Neil Ferris, the council’s corporate director of place, said in a statement: “We want our historic city to be accessible and inclusive for all.

“The attractive features, cobbles and narrow, mediaeval streets of York’s centre present challenges to those with mobility issues, while attracting large visitor numbers which can create security risks.

“York, like cities including Chester and Newcastle, is installing measures to combat the threat of ‘vehicle as weapon attacks’, like those seen in Liverpool, Toronto, London and Nice, following advice from counter-terrorism experts and the police advising emergency vehicle access only.

“We recognise that listening to feedback from, and the lived experience of, disabled residents is a very important part of making our ambition of having a safe and accessible city centre a reality.

“Work is ongoing to improve various access aspects across the city, including the creation of additional dropped kerbs, extra blue badge bays and improvements to Stonegate to make historic streets more accessible.

“Further work on this will be informed by a specialist access consultant.

“Dial-and-ride services, wheelchair-accessible buses and Shopmobility services continue to support people to get into and around the city centre alongside York Wheels [a community transport charity].”