You are here: Home / Arts, Culture and Sport / Pub that replaced its accessible toilet with a kitchen faces council action 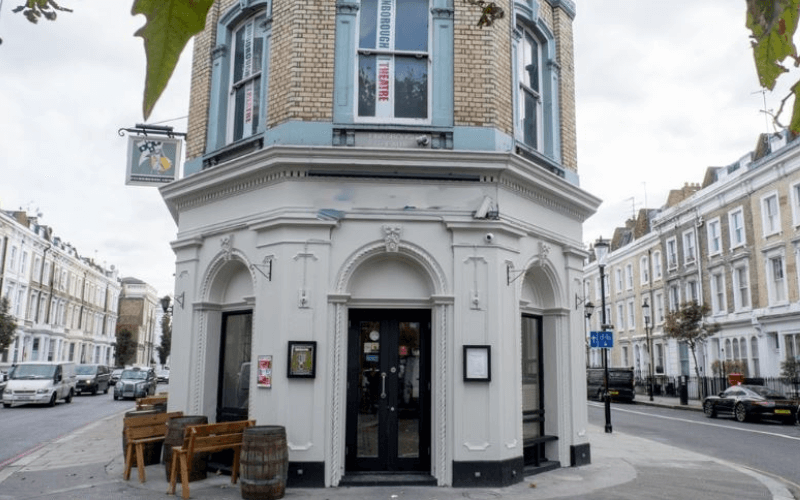 The owner of a pub who ripped out an accessible toilet and replaced it with a kitchen has been compared by a disabled campaigner to a business putting up a “whites only” sign in its window.

Darren Nolan, the owner of the Finborough Arms (pictured), near Earl’s Court, London, is believed to have replaced the toilet – intended only for the use of disabled customers – without Kensington and Chelsea council’s permission.

Now disabled customers are unable to access toilet facilities unless they can use a set of stairs that lead to an inaccessible toilet in the basement.

Nolan told a disabled campaigner in an email that the accessible toilet had been “in a terrible state” and out of order for more than a year when he took over the pub, and as no-one seemed to be missing it, he said, “we took a view the space would be much better used as a kitchen”.

This week, the Finborough Theatre, which operates in a 50-seat space above the pub, was premiering a new play about the discrimination faced by disabled people.

The play, Scrounger, is written and performed by disabled actor, writer and campaigner Athena Stevens, and is partly based on her experiences of taking legal action against British Airways and London City Airport after her electric wheelchair was badly damaged when she tried to take a flight to Glasgow.

Stevens, a writer in residence at the theatre, told Disability News Service (DNS): “I laughed outright when I learned that the pub’s owner was foolish enough to rip out the pub’s only accessible bathroom with the excuse that it was not being used that much.

“It’s 2020! Get with the programme! Making your business less accessible than it already is is the equivalent of putting a ‘whites only’ sign on your shop front.”

Michael Gannon, who drew the attention of Kensington and Chelsea council to Nolan’s actions, said the pub’s owner had showed “indifference” to the rights of disabled people and the barriers they faced.

Gannon, who was a member of the ground-breaking Disabled People’s Commission in neighbouring Hammersmith and Fulham and is a trustee of the disabled people’s organisation Action on Disability, discovered the pub’s actions when visiting the theatre last month.

He told Nolan in an email: “I find this a retrogressive step that has clearly been taken with no thought for those who have a disability.

“Did you realise that it makes using the pub extremely difficult for us as a group? Or is it a case that you don’t really care?”

Nolan claimed in the email exchange that the change of use for the toilet space had been agreed by the local council.

But Gannon was told last week by an officer in Kensington and Chelsea council’s building control department that Nolan’s decision to rip out the accessible toilet “would not be permitted” under building regulations because “it makes the existing situation worse”.

He was also told the council had not received an application from the pub to change the use of the accessible toilet to a kitchen and so the move was “unauthorised”, and the toilet would have to be reinstated.

The Finborough Arms had not responded to requests to comment from DNS by 11am today (Thursday).

A council spokesperson said: “We are aware of an allegation regarding the removal of accessible toilet facilities at the Finborough Arms.

“Our building control team have written to the owners to give them the opportunity to either refute the allegation or submit an application to bring the premises in line with regulations. We are awaiting their response.”

McPherson said: “I should stress that we have an excellent and close working relationship with the pub (the theatre and the pub are two entirely separate businesses), and it’s only fair to point out that they have been hugely helpful and supportive of the special requirements needed for Athena’s show.

“We did, however, very strongly disagree with their fait accompli of removing the ground floor toilets which has cost us many long-standing customers.”

He said the theatre had spent “a great deal of time and not a little expense” in sourcing a stairlift that could be used in the 152-year-old building, and was now seeking funding to pay for its installation.