You are here: Home / Benefits and Poverty / Recession and austerity ‘have provided a deadly mixture’

The combination of the recession and the coalition’s austerity programme is likely to have been responsible for hundreds of suicides in England, a researcher at Oxford University has suggested.

Dr Aaron Reeves, a sociologist at Oxford University and part of a group of researchers investigating the effects of recession and austerity, told a seminar organised by Disability Rights UK in London that there had been at least 10,000 “excess” suicides across Europe and north America as a result of the global recession from 2008-2010.

The seminar – sponsored by Joseph Rowntree Foundation – was addressed by four leading academics, and explored how to develop economic policies that would support disabled people into employment

Reeves said: “We are saying broadly that we are seeing a rise in mental health issues, and a symptom of that is the rise in suicides.”

He said that the recession had made things difficult for “vulnerable populations across Europe”, while austerity policies introduced by governments had made it even worse.

But he said the steep rise in suicides during the recession had not been seen in some countries which had done more to invest in programmes to support those who were out-of-work.

After the seminar, he told Disability News Service that there had been more than 1,000 excess suicides in England over the two years from 2008-2010, attributed to the effects of the recession.

And he suggested that the coalition’s post-2010 austerity policies – including its sweeping welfare reforms and cuts – will have exacerbated that figure.

He said: “The key issue is that whatever the recession did, austerity made it worse because it exposed people to the economic shock to a much greater extent. We definitely see some good evidence that there is a relationship there.

“Based on what we know about the association between unemployment, economic insecurity and suicide, we can be fairly confident that austerity has made things worse for some groups.”

He added: “One of my colleagues said that if austerity had been a randomised control trial, it would have been stopped a long time ago.”

Reeves also told the seminar that it was “widely recognised” that austerity had been “bad” for the economy, despite the claims of Conservative chancellor George Osborne, while “welfare austerity” had been the “worst thing” the government could have done for the economy.

And he pointed out that while the number of claimants of jobseeker’s allowance (JSA) had fallen – a fact trumpeted by ministers – the number of disabled JSA claimants was rising.

He and his colleagues have also looked at the rising use of benefit sanctions.

By analysing the rates of sanctions across local authority areas, they found that the government’s welfare reforms had caused a sharp rise in the proportion of claimants who leave JSA after being sanctioned.

Before the coalition’s reforms, the number of people claiming JSA fell by about 10 for every 100 sanctions.

But following the introduction of work and pensions secretary Iain Duncan Smith’s stricter sanctions regime, about 40 claimants now leave JSA for every 100 sanctioned.

Reeves said evidence showed that nearly all of those who left JSA were leaving for reasons other than finding work.

He added: “The vast majority of people being pushed off JSA are not going into work.”

Reeves told the seminar – following a question from disabled campaigner Ruth Bailey – that it was not clear how those disabled people pushed off JSA were surviving without those benefits. 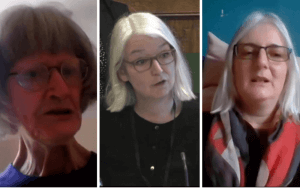