You are here: Home / Transport / ‘Scandal’ of new rail station set to be built without step-free access to trains 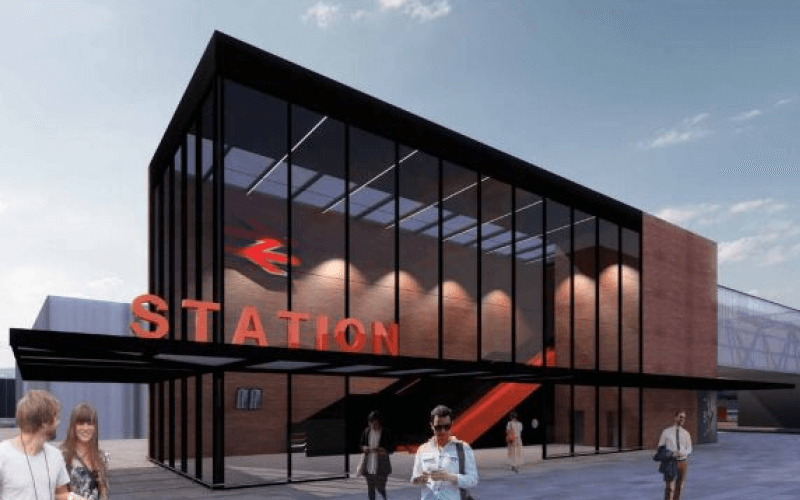 A new rail station being built as part of a multi-billion pound regeneration programme will not enable wheelchair-users to board trains without the help of staff and a ramp, disabled campaigners have warned.

Brent Cross West Thameslink is being built as part of the £4.5 billion Cricklewood Brent Cross development in north-west London, a partnership between Barnet council and the private sector.

But current plans for the station, which is due to open in 2022, are that it will be step-free from the entrance to the platform, but not from the platform to the train.

This appears to be because building the higher platforms necessary for wheelchair-users to board trains without manual ramps and assistance would mean freight trains would have to slow down when passing those higher platforms.

Campaigners believe that although most freight trains will pass through the station’s dedicated freight platform, some will be routed through passenger platforms, and it could delay the passenger services behind them if they are forced to slow down.

The controversy could prove embarrassing for Govia Thameslink Railway, the company which will run Thameslink services through the station.

Two months ago, the company faced protests after issuing guidance – which it later rescinded – telling station staff that they should not attempt to place “persons of reduced mobility” on a train “if there is a possibility of delaying the service”.

Its Thameslink services are driver-only operated and many of them run without any other staff on board.

This means that any assistance for wheelchair-users who want to disembark from a train at the new station on these services will have to rely on station staff and the use of a manual ramp.

Govia said details on the station plans would have to come from the council or Network Rail.

But a Govia spokeswoman said: “This is set to be a fully staffed station from the first to the last train, meaning that there will be someone available to support people embarking/disembarking at all times.”

She said the platforms “have to be built to cater to the wide variety of trains that pass through the station.

“In central London, the stations which have platform humps only have one class of train passing through so can cater specifically to that type of train.”

But access campaigner and wheelchair-user Ruth Bailey, who lives near the site of the new station, said: “Shouldn’t there be a debate as to why occasional disruption justifies compromising routine, full, step-free access for wheelchair-using passengers?

“What is possible starts with a mindset. The regeneration project involves many engineering feats from building bridges to changing the course of rivers.

“Given the money and expertise this requires, can it really be impossible to find a way to raise and lower a wheelchair-user 10 to 20 centimetres?”

Alan Benson, chair of Transport for All, the user-led organisation which campaigns for an accessible transport system in London, said: “Disabled and older people deserve the same right to access transport as everyone else and this means the freedom to be as independent as they wish.

“This principle is accepted by both government and across the industry, but the argument is always that retro fitting a 150-year-old railway is expensive and will take time.

“It is a scandal therefore when once-in-a-lifetime projects such as this are not delivered with step-free access to the train from day one.

“We see many examples in the UK and abroad where either good design or technology provide fully step-free solutions, yet the industry continues to see access to the platform only as a goal to be reached rather than a minimum to start from.

“With the increasing push to cut costs, reduce staffing levels and introduce ‘driver only operation’ trains we are seeing disabled and older people being denied access to the railway on a daily basis.

“This will only get worse between now and this station opening in 2022.”

Benson added: “It’s time for a clarion call to those responsible to seize this one-off opportunity to build a future-proofed, fully inclusive station fit for 21st century Britain, not something that is an echo of a bygone era.”

Barnet council, which is delivering Brent Cross West in partnership with Network Rail, has secured outline planning permission for the plans, with a detailed planning application due to be submitted this summer.

A Brent council spokesman declined to say why the plans do not currently allow for step-free access from pavement to train.

But he said in a statement: “We welcome residents’ participation in the consultation for the new Brent Cross West Thameslink station and would encourage others to submit their views.

“The planning application for the proposed station will be submitted later this year, when it will be considered by committee members.

“If the application is approved, the delivery team will then start to look at the more detailed elements of the station design.

A Network Rail spokesman said: “This project is being led by Barnet council, who have carried out the initial design process.

“Network Rail is a delivery partner, carrying out work on their behalf.”

Picture: An artist’s impression of the new station