You are here: Home / Arts, Culture and Sport / Scope’s decision to close Disability Now ‘is a tragedy’ 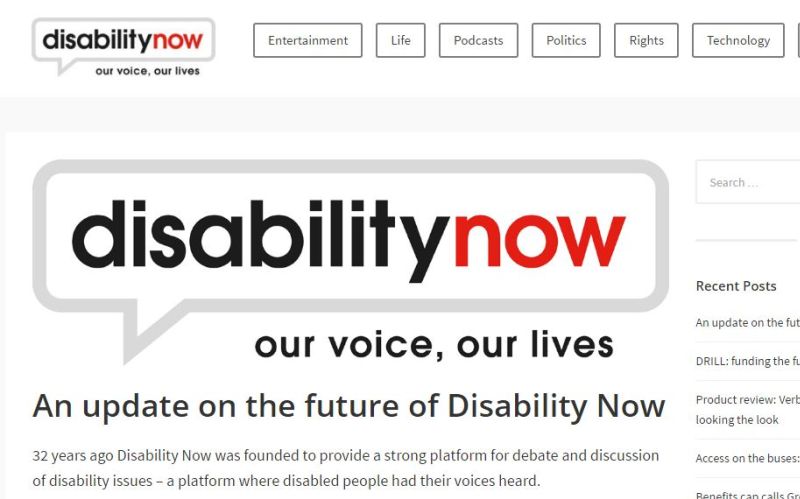 The disability charity Scope is to close its disabled-led online publication Disability Now (DN) in a bid to cut costs, more than 30 years after it first appeared as a newspaper.

But questions have been asked over Scope’s decision to continue publishing DN-branded content on its own website.

DN was first published, under a different name, in 1984, first as a newspaper, then as a magazine, and finally in an online-only format four years ago.

But Richard Lane, Scope’s head of communications, said the charity had now decided that DN was “no longer a viable business in its current format”.

DN’s only member of staff, its disabled editor Ian Macrae – it also used a number of disabled freelances – has apparently been made redundant, although the charity has not confirmed this.

Lane said the charity had decided to close the publication because of the major changes in “the variety and diversity of media and content covering disability issues” over the last three decades.

He said: “At an incredibly difficult financial time for the charity sector, we have to look at all expenditure very carefully. This decision was not taken lightly.”

Scope plans to continue to publish DN-branded editorial on its own website, and it said this would “continue to be produced and led by disabled people”, while it planned to have someone working in a journalism role, which could be Macrae.

DN has always fiercely guarded its significant level of editorial independence from Scope*.

A Scope spokeswoman claimed that the new content would “absolutely retain its editorial independence” from Scope, and that there would be no control at all by Scope over that content.

Lane said later: “In terms of future plans, no final decision has been made yet on timings or the look and feel of the content.

“What has been agreed is that the name Disability Now will live on in new content to be hosted on Scope’s blog.

“This content will be features and interviews produced by disabled people covering a wide variety of issues.

“We’ll update followers of DN in the new year when more information is available.”

Paul Carter, a former reporter on the magazine, and more recently presenter of its monthly podcasts – which he said were “one of the jewels in its crown” – said he was not surprised by the decision.

But he added: “It’s been coming for a long time. I still think it’s a tragedy.”

Scope said in a statement that it needed “to keep up with changing times”, and that there were now “new ways and new platforms that can provide greater reach and greater impact” in a media world in which disabled people’s voices are “heard through more specialist and mainstream platforms, blogs and podcasts than ever before”.

But Carter, who is hoping to continue presenting disability-themed podcasts, said: “I completely understand the media landscape has changed.

“I don’t think DN was ever immune to that background.

“I understand Scope’s reasoning, even if I don’t agree with it.

“At a time when we as a community are more under threat than ever, and it feels the wider mainstream media seems to have its guns trained on us, we need a voice and outlet more than ever.

“To shut down one of those lead voices at a time when we need it most seems wrong, but I understand it as a financial decision.”

He said that the idea of continuing to publish DN-branded content on Scope’s website when there was “no connection to what has gone before” was “a stretch”.

Over three decades, DN ensured that the voices of disabled people were heard on the issues that mattered to them, a task that was continued successfully by Macrae as he oversaw the closure of its print version and moved it to a web-only format.

In recent years, DN’s podcasts have covered some of the most controversial issues of the day, and featured interviews with high-profile disabled people, including Baroness [Jane] Campbell, Frank Gardner, Evelyn Glennie, David Blunkett, and a string of disabled activists, campaigners, Paralympians, politicians, academics and artists.

Under former editor Mary Wilkinson, DN built a reputation for campaigning journalism, pushing for changes in the law and government policy on issues such as extending winter fuel payments to disabled people, legalising medicinal cannabis, toughening sentences for ill-treatment and neglect of people with learning difficulties in residential care, and addressing the abuse of accessible parking spaces.

But its most significant campaigning success came as a result of a pioneering and hard-hitting investigation into disability hate crime, led by its former news editor, Katharine Quarmby – and a subsequent report co-published with the UK Disabled People’s Council and Scope – which had a huge impact on both the criminal justice system and the mainstream media.

Macrae, who worked for the BBC before he joined DN, declined to discuss Scope’s announcement with Disability News Service (DNS) this week, but in a blog he said that the publication had “given voice to those who are all too often silenced, featured issues that are all too often ignored and challenged those who do not believe disabled people’s voices should be heard”.

He added: “In our written content and podcasts we have also trumpeted and celebrated the pride which we and many disabled people feel in being who and what we are.”