You are here: Home / Politics / Scottish campaign could boost political involvement across UK 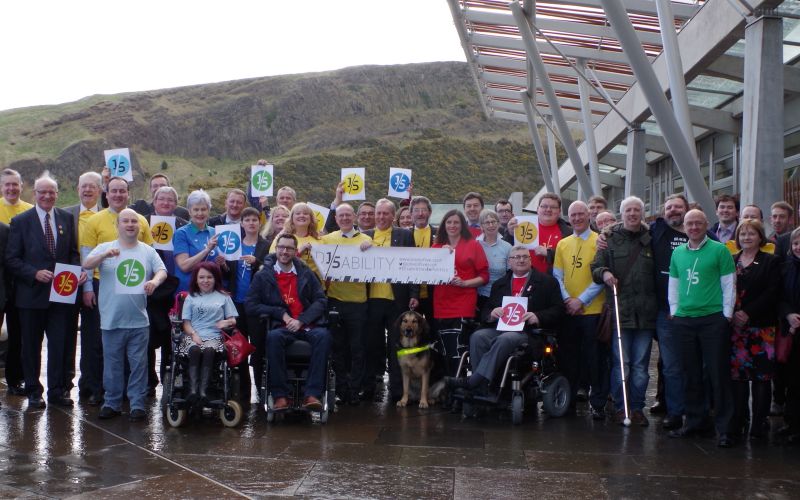 A cross-party, user-led campaign aims to boost disabled people’s participation in politics in Scotland, and could soon be doing the same across the UK.

The One in Five campaign was only set up in February by Scottish disabled activist Jamie Szymkowiak, a member of the SNP.

He was soon joined by disabled Labour activist Pam Duncan-Glancy, and within three weeks their new organisation had signed up all six of the political parties represented in the Scottish parliament.

Their aspiration is for the number of disabled people involved in Scottish politics to mirror the one-in-five working-age people in Scotland who self-identify as disabled people.

Organisers of One in Five say they have yet to find another example of a campaign which has been backed by all of Scotland’s major political parties.

Among other organisations to back the campaign is COSLA, the Convention of Scottish Local Authorities.

The charter wants political parties to ensure that disabled activists can stand for election to posts such as secretary or chair of their local party on a job-share basis, and One in Five hopes this will eventually extend to publicly-elected posts such as councillors and MPs.

Only last week, Disability News Service reported how disabled campaigners have called on Westminster to press for new laws that would allow parliamentary candidates to stand jointly for election as job-share MPs, after a judge threw out a legal case brought by two members of the Green party, one of whom was disabled.

There are now hopes that SNP and Labour MPs will agree to bring the One in Five campaign to the Westminster parliament after the summer recess.

Jamie Szymkowiak, One in Five’s founder, said the campaign had done “amazingly well” in a short period of time.

He said: “We aspire to have political participation and representation that reflects our society.

“I think it has just hit a nerve. A lot of the people I discuss this with do not understand why something like this has not been done before.”

He said the element of the campaign that appeared to be most important to disabled people was the need for meetings to be held in accessible venues, and for information – such as party manifestos – to be made available in accessible formats.

He added: “As a first step, if political parties and organisations ensure meetings and materials are accessible, including at local and national levels, our aspiration is achievable.

“Scotland has witnessed a huge upsurge in political interest in recent years and I want to ensure disabled people are included in all areas of our democracy through a positive campaign, regardless of which political party you support.”

This week, One in Five called on the Scottish government to set up its own version of the Access to Elected Office Fund (AEOF), which from 2012 to March 2015 offered grants to disabled people to pay for the additional impairment-related costs they faced in standing for election as a councillor or MP.

AEOF covered prospective candidates seeking election to the UK parliament, and police and crime commissioner elections in England and Wales, but was otherwise restricted to elections in England. It is now lying dormant after its government funding ran out just before the general election.

One in Five wants a Scottish version of the fund that would help disabled people trying to secure election to the Scottish parliament and Scottish councils.