You are here: Home / Human Rights / SNP hears ‘justice for the dead’ demand as it backs call to implement UN report 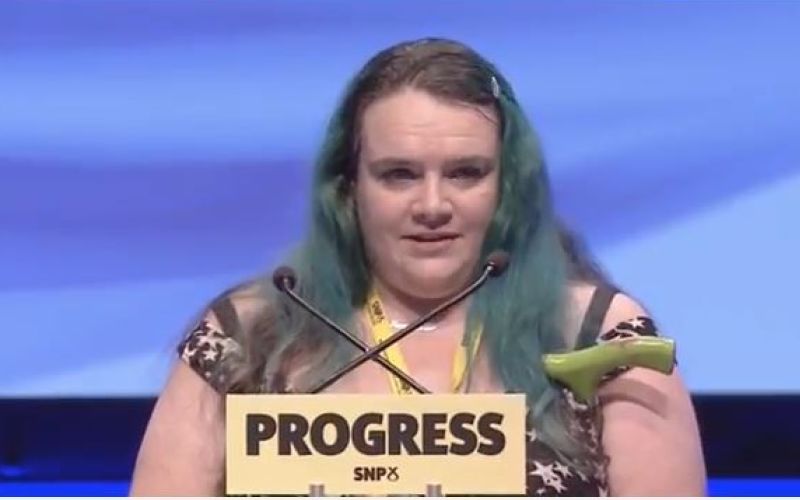 The SNP’s annual conference has unanimously called on the UK government to implement the findings of a UN committee of disability rights experts, after a disabled activist demanded “justice for the dead” and “rights for the living”.

The motion proposed by disabled party activist Fiona Robertson called on the UK government to stop using “meaningless platitudes” to hide from its responsibility for the “immense human suffering” it has caused disabled people across the UK through its policies.

The conference in Glasgow unanimously passed the motion, which criticised the Conservative government for ignoring the findings of the report by the UN’s committee on the rights of persons with disabilities.

And it demanded that the government implement all the 80-plus recommendations made by the committee in August, when its report detailed the UK’s progress on implementing the UN Convention on the Rights of Persons with Disabilities.

Later in the conference, SNP leader Nicola Sturgeon used the example of the UK government’s “treatment of disabled people [being] so appalling that the UN brands it a human catastrophe” as a sign of the “bankruptcy at the heart of this Tory government”.

Robertson, a member of the executive of the party’s disabled members group, told the conference that the UK government had also been the first to be investigated for breaches of the convention – under its optional protocol – which was “a shameful mark on our history”.

This investigation concluded last November that the government had committed “grave and systematic violations” of disabled people’s human rights, she said, but the UK government had “responded with a shrug of the shoulders”.

That investigation was triggered by disabled activists from Disabled People Against Cuts (DPAC), party members were told in a written supporting statement.

Robertson (pictured, proposing the motion), who works with DPAC and its Scottish sister organisation Black Triangle, told the conference: “Disabled people began this process and saw it through and will hold the government to account.”

When the UK’s overall progress in implementing the convention was examined this year (pictured), she said, the UN committee concluded that the government was responsible for a “human catastrophe” because of the impact of its policies on disabled people.

Robertson said the committee also concluded that the Westminster government had “systematically misled the public about the impact of government policy, refusing to answer questions and misusing statistics to create a false impression” and that it had “demonised” disabled people with the use of “dangerous rhetoric”.

But she added: “Again, it has been met with a shrug.”

She pointed to research from Oxford University, which suggested earlier this year that cuts to health and social care were likely to be the main cause of 30,000 excess deaths in England and Wales in 2015.

Robertson also pointed to a prevention of future deaths report written by a coroner following the death of Stephen Carré – a report discovered by Disability News Service two years ago – which was ignored by work and pensions ministers Iain Duncan Smith and Chris Grayling when they came to office after the 2010 general election.

That report would have saved disabled people’s lives if it had been acted on, she said.

She told the conference: “We demand justice for the dead and we demand rights for the living.”

Robertson said that a failure to engage with the UN committee’s recommendations would confirm “that international law is not something the UK cares very much about” and that “they have no interest in meeting their obligations”.

John McArdle, co-founder of Black Triangle, who co-authored the motion, said after it was passed: “It is now a matter of public record that both nationally and internationally the Tory government is in flagrant violation of international law and is behaving like a rogue state.”

He pointed out that one of the local SNP parties that adopted the motion was Edinburgh North and Leith, the constituency of the writer Paul Reekie, who took his own life in 2010 following a work capability assessment, and whose death was the catalyst for the formation of Black Triangle.

McArdle said: “We just want to appeal to the British public to pay attention to the UN report and ask themselves, ‘Is this really what defines me as a British citizen and what defines us as a nation? Is this the kind of country we want to be?’

“If we want to be a civilised country that abides by international law and the UN convention, there can be only one answer and that is to get rid of this government as quickly as possible.”