You are here: Home / Activism and Campaigning / Stephen Aselford: Tributes paid to ‘energetic and passionate campaigner’ 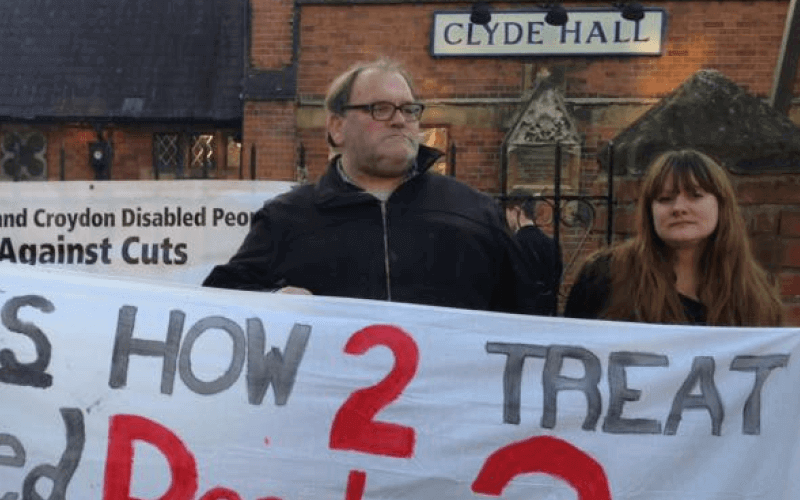 Friends and fellow activists have paid tribute to Stephen Aselford – a passionate disabled campaigner who was committed to improving the lives of others – after his sudden death.

They have described not only his commitment to social justice, equality and disability rights, but also his kind and cheerful nature.

Aselford (pictured, centre) worked originally in a sheltered workshop in Croydon, where he joined the GMB union, of which he remained a member all his life.

He later played a significant role in several London-based disability organisations, including People First (Self-Advocacy), Transport for All (TfA) and Disability Croydon.

He was also a long-time member of the Labour party and friends say that he loved public transport, his family, Croydon and “shaming Tory politicians”.

One of his finest moments, says his friend and fellow disabled activist Ellen Clifford, was when he confronted Tory mayoral hopeful Zac Goldsmith in 2015 about voting for the government’s cuts to support for disabled people placed in the work-related activity group of employment and support allowance.

Another was in 2015, when Aselford wrote of how a planned BNP demonstration was “an attempt to stir up hatred and divide our community”, and described his pride at living in such a “diverse and vibrant” area as Croydon.

He wrote: “Migrants were not responsible for the financial crisis. In fact, our economy and vital services that disabled people rely on, including the NHS and social care services, are dependent on migrant labour.”

Among those sending condolences this week was John McDonnell, Labour’s shadow chancellor and a long-standing supporter of many grassroots disabled people’s organisations.

Aselford was a dedicated member of Disabled People Against Cuts (DPAC) and a co-founder of Bromley and Croydon DPAC.

Clifford said: “Stephen was an energetic and committed campaigner with an instinctive passion for social justice.

“He was also a thoroughly lovely person with a great sense of humour.

“He was knowledgeable and politically insightful and had great ideas. As a beloved friend he is badly missed and as an activist he leaves a big hole in the movement.

“The best way to honour his memory is to continue the fight that was so central to his life.”

“He was a passionate campaigner locally and nationally and was well known for his strong views on accessible transport and the right to vote for people with learning difficulties.

“Stephen worked really hard to make sure that people with learning difficulties had a voice and were heard – particularly our ‘political voice’.

“He helped others realise that we have views on all sorts of things, not just disability issues.

“Wherever he went, he lit up the room.”

Aselford worked for People First for three years, between 2008 and 2011, as an inclusion worker, helping to build the capacity of its member organisations.

Lee said: “It’s important for us to remember Stephen’s energy and commitment to making the lives of others better. He achieved so much and we sadly lost him far too early.”

Aselford was also a long-time member and trustee of TfA.

Alan Benson, TfA’s chair, said: “He was deeply committed to the importance of transport for the public good and specifically for the well-being of disabled and older people.

“He could often be found supporting protests, picket lines or events promoting or
defending public transport.

“His strongly held beliefs were rooted in an incredibly detailed knowledge of trains and buses, both old and new.

“He was always willing to share this passion and could be relied upon to know exactly what was going on in the transport sector.

“But perhaps the thing Stephen should be best remembered for is his kind
and cheerful nature.

“He was always one of the first to arrive at Transport for All events, where his irrepressible positivity was infectious.

“He will be sorely missed by those that knew him and by the campaigns he supported.”

Paula Peters, co-founder of Bromley and Croydon DPAC, said her friend was always ready with a smile and a joke and loved DPAC’s direct actions, which he called its “naughtiness”.

She said he had provided “great political insight, with great experience and knowledge” in his role as equalities officer for Unite Community’s new Bromley and Croydon branch.

She said: “His passing is a great loss to our movement. We miss a treasured friend, comrade and activist, but we will honour Steve’s memory by continuing the fight for human rights as he would want us to do.”

Michelle Gordon, GMB’s equalities officer, said Aselford had been active in the union for many years and had been determined to make it more accessible to disabled people, while he often spoke of the importance of young people joining the union movement and the need to do more to promote its successes.

She said: “Stephen will be sadly missed but his legacy of making our movement more accessible will live on.”

Linda Burnip, co-founder of DPAC said: “Stephen was involved with DPAC for many years and was a lovely man who will be missed by many people.”

Leanne Purvis, a fellow self-advocate and long-standing friend through People First, said: “Big Steve was a big help to anyone and nice to talk to. He was my friend and I will miss him a lot.”

Andy Ward, a friend and fellow member of Croydon constituency Labour party, said he was “a great campaigner for disability rights and in the field of public transport” whose knowledge and expertise on public transport and accessibility was “almost unsurpassed”.

He said: “He will be sadly missed both for his disability rights campaigning and for his campaigning for better accessible public transport.”

Tony Newman, leader of Croydon council, said: “Stephen was over many years a tireless campaigner for disabled people, and worked hard to ensure everyone received the maximum amount of support possible.

“Stephen was a gentle, kind man who along with his encyclopaedic knowledge of the transport system will be greatly missed by all.”

Croydon councillor Karen Jewitt said: “I was proud of Stephen. He was a friend as well as a comrade.

“I will miss him. His contribution to equality and the Labour movement is something we should all aspire to.”

DPAC plans to organise an event to commemorate Stephen Aselford’s life and work.