You are here: Home / Arts, Culture and Sport / Survey shows discrimination and abuse experienced by disabled fans at away matches 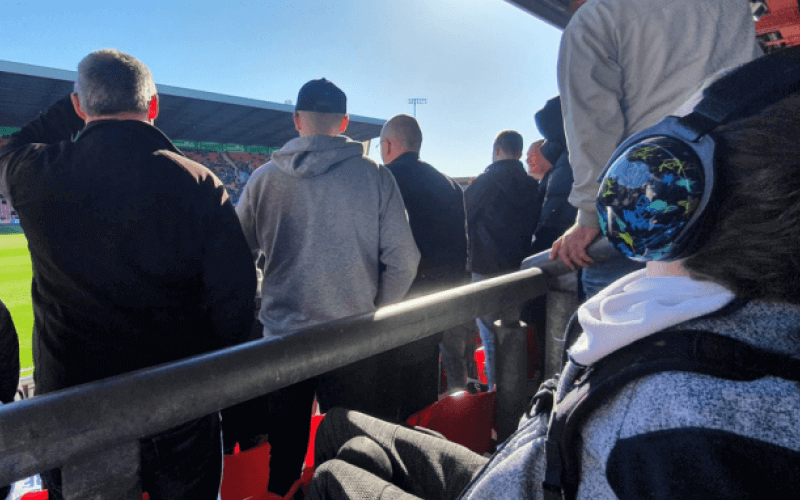 Hundreds of disabled football fans have described how they have been subjected to offensive songs or chants, verbal abuse and other discriminatory behaviour when following their teams to away matches.

They were responding to a survey carried out by the disabled-led charity Level Playing Field (LPF), which represents disabled sports fans in England and Wales.

Of more than 600 disabled fans who responded to the survey, more than two-fifths (43 per cent) said they had been subjected to some form of abuse or negative attitudes at an away game in the last five years.

More than a quarter (26 per cent) said they had been subjected to verbal abuse, while about one in six (16 per cent) had experienced disability-related offensive songs, chants or gestures.

More than one in eight (13 per cent) said that “fear of disability abuse” was a barrier for them when attending away matches.

LPF said these experiences were “clearly unacceptable”, and that clubs have a legal duty under the Equality Act to ensure there is a “clear process for disabled fans to report abuse, and that these reports are dealt with swiftly and appropriately”.

The survey results show that the overall rating for the matchday experience for away games was significantly lower (an average of 3.27 out of 5) than there was for home games (3.81 out of 5) in a survey carried out last year.

Nearly half of the disabled fans (48 per cent) who responded to this year’s survey reported experiencing a poor view of the match as an away supporter.

LPF said it was not acceptable “for clubs to expect fans to pay for tickets and travel when they are unable to view the match”.

The report also says that 28 per cent of disabled supporters complained of not being seated with their own fans, while one in four said they had difficulty buying tickets.

It is now eight years since clubs began to face concerted, high-profile pressure over their access failures –with much of that pressure coming from LPF – which led to the equality watchdog writing to all 20 Premier League clubs to ask how they were complying with their legal duties to provide reasonable adjustments for disabled supporters under the Equality Act.

Tony Taylor, chair of Level Playing Field, said clubs had taken “significant steps” in recent years “to improve the matchday experience of disabled fans in general”, but he said the survey showed there was “still much work to be done and that the away fan experience, in particular, should be an area of focus for improvement by clubs”.

He added: “It’s a sad situation that the access to live sport, which most supporters take for granted, is clearly not being provided in the same way for disabled supporters at away matches.

“The ability to watch a football game without blocked sightlines and fear of abuse or judgment is a basic expectation not being met.

“Clearly, there is a need for greater education within football.

“Level Playing Field will continue to take the lead in this by raising awareness amongst supporters and sharing best practices with clubs and governing bodies.

“We will be looking to these organisations and other fan-led groups to work with us to improve the issues highlighted in this survey, which continue to beset the away fan experience of disabled supporters.”

The English Football League (EFL), which represents clubs in the second, third and fourth tiers of English football, does not yet compile figures on how many fans have been banned by EFL clubs for discriminatory abuse, but it said it plans to start compiling them centrally as part of its new equality, diversity and inclusion (EDI) strategy.

An EFL spokesperson said: “Where reports of discrimination are made or abuse is witnessed by match day staff, the appropriate action will be taken which could include criminal prosecution and a ban.”

Asked about the disparity between the experiences of home and away disabled fans, he said: “Clearly this is something which we want to challenge and ensure that all fans receive similar experiences when attending all matches, whether as home or away supporters.

“We are committed to working alongside our clubs and Disabled Supporters Associations to ensure this and would encourage clubs to continue to establish good practice and listen to fans’ voices throughout the league.”

He added: “Through our new EDI strategy, launching over the summer, the EFL will reinforce our commitment to ensure that the voices of under-represented groups, including disabled fans, across our clubs, will continue to be heard which will allow for effective and sustainable change.”

The Premier League – which represents the top tier of English football – refused to say if it was concerned about the difference between the experiences of disabled home and away fans.

And although the Premier League introduced bans for anyone found to have committed discriminatory abuse at the start of last season, it was also not able to say how many bans had been applied for disability-related abuse.

But a Premier League spokesperson said that all its clubs had “undertaken substantial work to improve disabled access for home and visiting fans”, which was “a priority for the league and significant investment has been made in stadium improvements to ensure they are accessible and welcoming environments for all”.

Premier League clubs have invested more than £125 million in improving accessibility since 2015, while the Premier League is currently reviewing progress and areas where further improvements should be made.

He said: “Clubs will continue to consult with supporters and Level Playing Field to improve accessible facilities at grounds and ensure the matchday experience is enjoyable for all.”