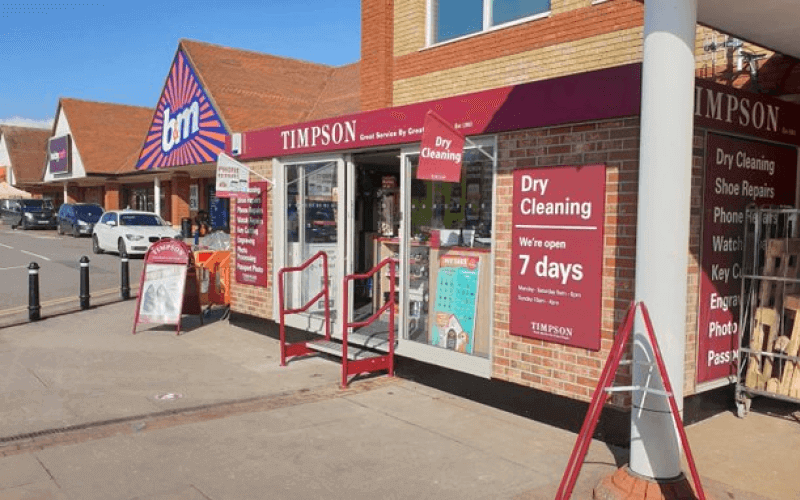 The high street retailer Timpson is facing allegations from disabled campaigners that many of its stores are inaccessible to disabled people.

The concerns focus both on its high street stores and on the small “pods” – factory-built kiosks – it has increasingly used in recent years to set up tiny stores in the car-parks of out-of-town supermarkets, but which frequently do not have wheelchair-accessible entrances.

Access campaigner Esther Leighton, co-founder of the disabled-led campaigning organisation Reasonable Access, told the company – which repairs shoes, cuts keys and offers dry-cleaning services – on Twitter this week that she was frustrated with how many of its stores do not have step-free access, or even a portable ramp.

Another disabled access campaigner, Sam Jennings – who secured a high-profile legal victory against rail company Southern in March over its repeated access failings – highlighted how Timpson failed to act when she pointed to a new and inaccessible “pod” in Taunton, Somerset (pictured).

The company’s chief executive, James Timpson, had bragged about the new store in March, saying that he had “high hopes for this beauty”, even though the picture he tweeted showed a clearly inaccessible entrance.

Jennings was told by a Timpson manager at the time: “Most of our pods don’t have ramps due to the limited space inside the pods for wheelchairs, however we’re always more than happy to come outside to you so we can still give you the same great service.”

Leighton told Disability News Service (DNS) that she was likely to send the company a “letter before action” – a letter sent to try to resolve a grievance before starting legal action – the next time she visited an inaccessible Timpson store.

She warned that offering street service, rather than enabling a way for the disabled person to enter the store, was likely to be a breach of the Equality Act, although only a judge would be able to rule on any particular case.

She said the Timpson failures were another example of how the Equality Act was not being enforced.

Jennings told DNS: “Timpson staff do tend to be very lovely and motivated and keen but that isn’t a trade-off for accessibility fails.”

Leighton added: “Timpson is known for being amazing in some areas of ethics, particularly being a good employer, so their failure to ensure even the most basic access for disabled people 25 years after they were required to [under the Disability Discrimination Act] is even more disappointing.”