You are here: Home / Human Rights / Top sports clubs are ‘sailing close to the wind’ on access

Many sports clubs across England and Wales are “clearly” in breach of equality laws, according to the boss of two charities that fight for the rights of disabled sports fans.

Joyce Cook was speaking at the opening of the new offices of the Centre for Access to Football in Europe (CAFE) and Level Playing Field (LPF), just a short distance from the headquarters of the Football Association at Wembley Stadium.

Cook, who chairs LPF and is the founding and managing director of CAFE, told guests that many clubs were “sailing close to the wind” when it came to access.

But she said that improving access was now “firmly on the agenda” in the UK and across Europe, and had made “inroads” globally, thanks to the work of LPF and CAFE.

But she said that campaigners had to “take responsibility” to “be bold and to learn from our successes”.

Cook, herself a wheelchair-user, told the event: “This isn’t up to the clubs alone as individual businesses. If we took that approach we’d have no rules and regulations and that simply isn’t the case.”

She added: “Here in the UK, we would no longer dream of excluding someone from a sporting event because they are black or catholic or female or gay, so why do we still find it acceptable to exclude disabled people whilst access remains inadequate?”

LPF has called for: a short-term fund to help smaller clubs improve access; examples of good practice and expert advice for clubs; and better regulation, including independent access audits.

The CAFE and LPF offices were officially opened by the Conservative sports minister Helen Grant, who paid tribute to Cook’s “leadership, dedication and passion”.

She said the CAFE and LPF team had “inspired many people to care for and contribute to what CAFE and Level Playing Field do. Clearly there is more to do, and sport and football need to look at ways to increase the funding to support this important work.”

CAFE was set up five years ago to take forward the work of LPF across Europe, improving access to stadia, and working closely with European football’s governing body UEFA to improve access and inclusion at its tournaments and flagship finals.

LPF works with sports governing bodies, clubs and disability organisations and government across England and Wales to help improve access to sporting venues and “the live match experiences for all disabled spectators”.

David Bernstein, chair of CAFE and president of LPF and former chair of the Football Association (FA), told Disability News Service (DNS) at this week’s event that top football clubs, the Premier League and the Football League were all dragging their feet when it came to improving access.

He said: “It is taking an awful long while to get compliance with not best or good practice, but minimal standards, in this country.

“We have been working at it for a long while. One way or another it is difficult to get really enthusiastic buy-in from the various authorities.”

He said football liked to see itself as “setting an example”, but he added: “Football likes to think of itself as a leader, but it needs to work harder in this particular aspect.”

David Davies, a broadcaster and former executive director of the FA, and a CAFE trustee and vice-president of LPF, told DNS that access had to be made a “priority at every level”.

The disabled writer, director and performer Jamie Beddard, a new LPF trustee and a devoted Ipswich Town supporter for nearly 35 years, said he had seen improvement in access over those 30-plus years, but added: “A lot of new stadiums are far better than the old stadiums, but there is a long way to go.”

He travels all over the country following his team, and has so far visited 86 league grounds.

Beddard, who uses a wheelchair, warned that much of the good practice at football clubs is down to the work of individuals, and when they move on, access can take a step backwards.

He said: “It cannot be dependent on the goodwill of individuals, it needs to be collective.”

The money is there in football to make real improvements, he said, but attitudes to access and disability need to change.

Because he attends Ipswich Town matches with a group of non-disabled friends, he does not experience disablist abuse himself, he said, but he has spoken to other disabled fans who have.

In an article he wrote for Momentum magazine, he says: “For disabled supporters, facilities, access and attitudes have improved, but heralded examples of good practice continue to suggest exceptions rather than the rules.” 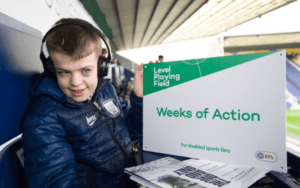