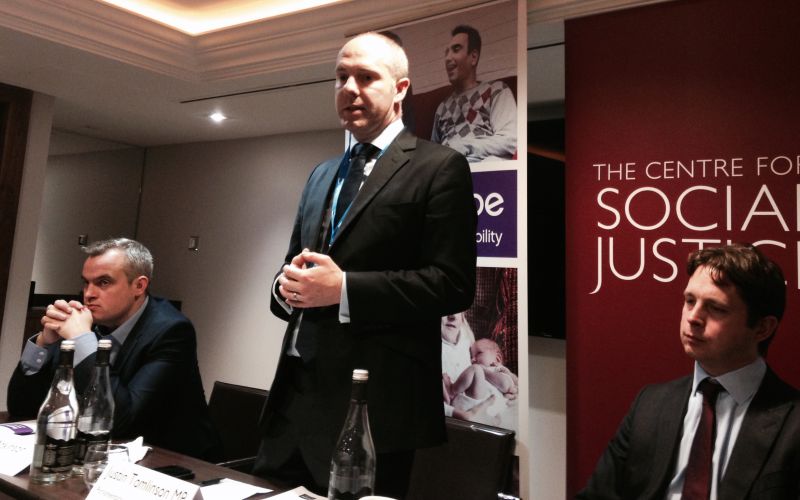 The minister for disabled people has defended his government’s campaign to boost disability employment, and has called on big business to lead the way in becoming more “disability confident”.

Justin Tomlinson (pictured) said the prime minister, David Cameron, had made a commitment to halve the gap – currently about 30 per cent – between the proportion of disabled people and non-disabled people in employment.

And he told fringe events at the Conservative party conference in Manchester this week that the government’s Disability Confident scheme would play an important role in achieving that target.

Following criticism by disabled and Labour activists that less than 400 employers had signed up in the more than two years since its launch, while there were less than 70 “active partners” – with many of those disability organisations – Tomlinson said these numbers were “just the beginning”.

He told a fringe meeting hosted by the National Autistic Society that he wanted more small and medium-sized businesses to join some of the large corporations – which include Fujitsu, Barclays and Nationwide – that have signed up so far.

He said that “big employers” could mentor and assist smaller businesses – particularly those in their own supply chains – in how to create more job opportunities for disabled people.

Tomlinson said the government should also examine its own supply chains, share best practice, and “start to lead by example”.

Asked by Disability News Service at a fringe event whether the government had employed a single disabled person as a special adviser to ministers in the Department for Work and Pensions since the coalition took power in 2010, he said it was a “really, really important question”.

He said he had some “incredibly talented people with disabilities who work in our team” but could not say whether any special advisers had been disabled people.

He told the fringe event, organised by Scope and the Centre for Social Justice: “I need to go back and look specifically at the numbers but we certainly should be leading by example.”

Tomlinson also pledged that the jobs gained in cutting the disability employment gap would have to be “real, genuine, fulltime jobs”.

Mark Atkinson, interim chief executive of Scope, warned Tomlinson that the disability employment gap had been “pretty static for quite some time”.

He said there needed to be “specialised, personalised employment support”.

He said: “We are in the business of making sure they are real jobs, we are not interested in sheltered jobs.

“Disability Confident is an important campaign, but it continues to be a campaign largely supported by the bigger employers.”

And he said the issue “must be a priority for ministers across Whitehall”, with “all of Justin’s colleagues pulling together to halve that employment gap”.

Emma Satyamurti, a disabled employment lawyer and partner at Leigh Day, told the fringe event that her company’s research had found that a “very significant proportion” of disabled employees did not ask for reasonable adjustment from their employers, while nearly half of disabled job applicants did not feel confident disclosing that they had an impairment.

She said: “If I could give one message to employers it would be, ‘Do not be scared.’ In my experience, most employers want to do the right thing but don’t know how to talk about disability.”

Satyamurti said that “often what disabled people need is really easy to give”, and that the most common adjustment needed was flexibility in where or when someone works.

She suggested that the government could introduce a legal right for disabled people to request a reasonable adjustment, similar to the legal right to request flexible working, an idea that appeared to interest Tomlinson.

She said: “It might raise awareness among disabled employees and increase employers’ confidence that they have the structural process for dealing with requests.”